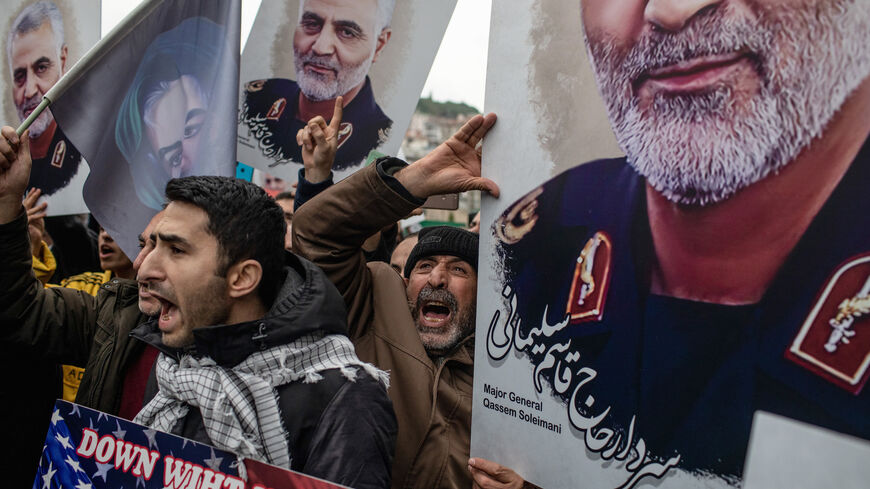 People hold posters showing the portrait of Iranian Revolutionary Guard Corps Maj. Gen. Qasem Soleimani and chant slogans during a protest outside the US Consulate on Jan. 5, 2020, in Istanbul, Turkey. - Chris McGrath/Getty Images

Iranian officials and media outlets have been paying tribute to the former head of the Islamic Revolutionary Guard Corps (IRGC) Quds Force, Qasem Soleimani, who was assassinated by a US drone strike two years ago.

Speaking at an event in Tehran commemorating Soleimani’s death, President Ebrahim Raisi said that Soleimani was “not just an individual, but a doctrine, and that he will not be destroyed with an assassination and missiles — doctrines remain and survive.” Raisi added that Soleimani’s “path is the continuation of the path of Imam Khomeini and Imam Khamenei.”

In a meeting with Soleimani’s family, Iran’s Supreme Leader Ayatollah Ali Khamenei said that “honesty and sincerity are the essence of determinant of Soleimani’s doctrine, which built his life and martyrdom.” Khamenei added that the late commander “was and is the most nationalist and religious person in Iran and the world of Islam.” He used the word "ummah," signifying the Muslim nation at large.

The doctrine of Soleimani, as Iranian officials like to refer to it, is the country’s effort to promote his legacy. As head of the Quds Force, Soleimani was responsible for military operations outside of Iran’s borders, particularly in supporting so-called “resistance groups,” or groups that Iran supports in the region militarily and that are aligned with Iran’s geopolitical ambitions. Soleimani played a large role in supporting Shiite groups in Iraq and various forces in Syria. When Soleimani was assassinated at the Baghdad International Airport, he was with Abu Mahdi al-Muhandis, the commander of the Iraqi Popular Mobilization Forces who played a significant role with Soleimani in the region in supporting various groups.

Soleimani specifically came to prominence during the fight against the Islamic State in Iraq, with pictures of him emerging showing him close to the front line. Iran had carefully cultivated his image as a nationalist and religious hero who was defending the country against terrorists and enemies.

Spokesperson for the IRGC Ramazan Sharif said that the United States and others behind the assassination “should await the repercussions.” Immediately after the attack, Iran launched missiles at the Ain al-Asad US air base in Iraq. Called Operation Martyr Soleimani, the attack caused extensive damage and also reportedly resulted in long-term health problems for many US soldiers at the base.