The replacement for assassinated Quds Force commander Qasem Soleimani has vowed revenge on US officials who were behind the killing. 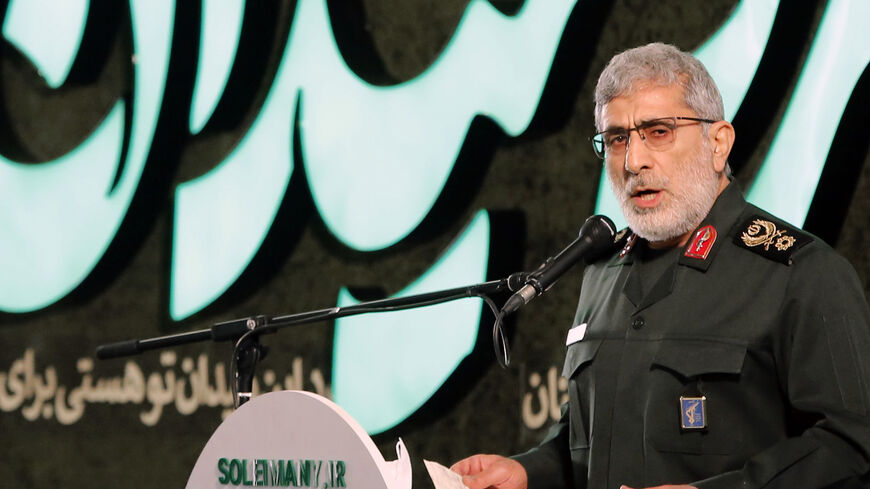 Speaking at an event commemorating the two-year anniversary of Soleimani's assassination on Jan. 3, 2020, by a US drone strike ordered by former President Donald Trump, Ghaani said, “We will get revenge that you will not forget for the rest of your life.” Talking about Trump and former Secretary of State Mike Pompeo, who advocated for the strike behind the scenes, Ghaani said, “All of the criminals who are on the scene, from the criminal US president to all of those behind the crime of the assassination of Soleimani, are under our magnifying glass.”

Ghaani added, “We do not have the style of [US] criminals, with divine power; we have our own style of revenge.”

Ghaani said that one of Iran’s and Soleimani’s goals was the removal of US troops from the region, which is currently happening. He said that US troop presence at one point was 150,000 — he didn’t specify when — but that today, according to US numbers, it is 2,500. He added, “But the honorable people of Iraq and Soleimani’s friends will not even tolerate this amount.”

Soleimani was assassinated along with Iraqi Popular Mobilization Forces commander Abu Mahdi al-Muhandis at Baghdad International Airport. On the anniversary of the killings, two suicide drones were sent toward the Ain al-Asad air base, which houses US forces.

Ghaani also said that Iran’s policies in the region would not just continue but become more determined due to Soleimani’s assassination. Addressing US officials, Ghaani said, “You have not understood the meaning of martyrdom. You think that martyring [Soleimani] will stop our path? If you had the smallest understanding, you would understand that [the path of] martyr Soleimani is stronger and firmer than commander Soleimani.”

While Iran vows revenge against the United States in response to the Soleimani assassination, Iranian officials are in negotiations with European countries to remove US sanctions on Iran. The negotiations, taking place in Vienna, are designed to revive the Joint Comprehensive Plan of Action, which was signed in 2015 and which the United States exited in 2015. As a result of the US exit and reapplication of sanctions, Iran increased parts of its nuclear program. The talks are taking place between the P4+1. The so-called E3 of the UK, France and Germany are indirectly representing the United States, which Iran has refused to allow to participate due to its exit and the sanctions.

The talks are now being led by the Ebrahim Raisi administration, which has vowed to take a harder line in these talks. While the talks kicked off with a rough start, US State Department spokesperson Ned Price said Tuesday that there has been “modest progress” on the nuclear talks. The United States has repeatedly warned that if the deal is not revived, it will have to resort to other measures. On the front page of the newspaper Iran, which operates under the Raisi administration, was the headline “No to arbitrary deadlines.”