The assassination of Quds Force commander Qasem Soleimani has shocked Iranians into unity. 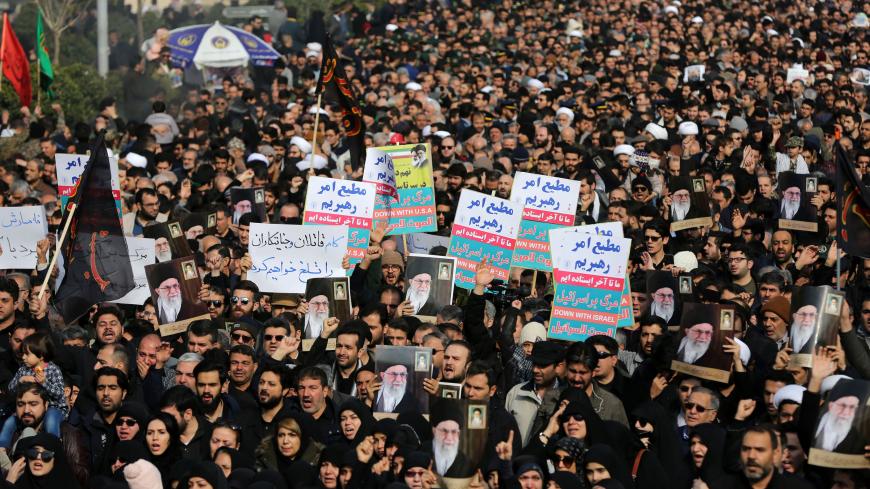 Many Iranians were shocked to wake up to the news of the assassination of Qasem Soleimani, the chief commander of the Islamic Revolutionary Guard Corps' Quds Force. The surprising development is already bringing the political groups and people inside Iran closer to each other as the possibility of war looms.

It was around 3 a.m. in Tehran when reports about the United States killing Soleimani were first announced on Iraqi television. Iranian media outlets needed time to confirm the news and at first only reported the assassination of Abu Mahdi al-Muhandis, the deputy head of Iraq's Popular Mobilization Units. Finally, after two hours of uncertainty, Iran’s state TV broke the news to Iranians, confirming the death of Soleimani.

The first Iranian official to react to the US strike was Gen. Mohsen Rezai, a former IRGC chief commander who vowed to take “harsh revenge” against the United States. Minutes later, Hesam Ashena, a senior adviser to Iran’s president, described Soleimani's killing as “crossing the red lines” of Iran, saying US President Donald Trump awaits the “consequences” of his decision.

Foreign Minister Mohammad Javad Zarif, who enjoyed a close relationship with Soleimani, stated that the Foreign Ministry is ready to use all its “international, political and legal capacities” to hold Washington responsible for the assassination.

Reformist Ali Rabie, a former high-ranking security official and the current spokesperson for Iran’s government, called the killing of Soleimani a “hideous” action. He said that Iran’s “strong response” will come soon.

Ahmad Khatami, Tehran's conservative Friday prayer leader, said in his sermon, “I declare that America will no longer have peace in the world. Today, the resistance in Iraq, Syria and Lebanon is sorrowful with Soleimani’s [death], and the time has arrived that these animals be wiped off the face of the region.”

Moderate Heshmatollah Falahat-Pishe, the former chairman of Iran’s parliamentary foreign policy commission, told the semi-official ISNA agency that the officials didn’t pay enough attention to the fact that United States and the United Kingdom are in charge of security at Iraqi airports. “Since the beginning of the [story] of the American contractor' death, I emphasized that this was a trap for the Iranians because Trump was [striving] to change the situation" to distract from his impeachment scandal. "Prior to this, Americans had also killed their own individuals and forces to create excuses for themselves. I predicted that this would be a trap to ambush Iranians, and it happened.”

Senior Reformist figure Azar Mansouri slammed the US president for assassinating a man “who played a central role in fighting IS,” saying, “The world should judge: Who is is creating chaos in the Middle East?”

Reformist Hossein Alai, a military analyst and former naval commander of the IRGC, warned that “tensions will rise in the region” as the result of the assassination.

“At the end of the day, this will lead to US withdrawal from Iraq, but we should expect more crazy actions by the United States. America may have more attacks and assassination on its agenda and the Iraqi government along with the people of Iran and Lebanon should be careful,” wrote Alai.

Former Iranian nuclear negotiator Seyyed Hossein Mousavian, who is based in the United States, believes that Trump has made the biggest strategic mistake of his presidency, saying, “US centers and forces across the region and world are [now] subject to long-term threats that will have irrecoverable damage.”

Meanwhile, Iran’s supreme leader appointed Gen. Esmaiel Qaani as the new chief commander of the Quds Force. Qaani has been actively involved in the organization since its establishment in 1981 and was Soleimani's deputy during the past two decades.

Iran’s government-run IRNA news agency argued that the United States will soon threaten Iran with “wide attacks” targeting “oil refineries” to deter Tehran from taking revenge and that the first impact of the strike will be “insecurity” across the region for American forces.

Advisers of Mir-Hossein Mousavi, the 2009 opposition leader who is under house arrest, condemned the assassination. “The martyrdom of Soleimani is an act of terrorism, against international rules and does not support peace and security in the region,” they stated.

It seems Soleimani's assassination is bringing Iranians from across the spectrum together, at least temporarily.