Scores of mourners died in a stampede that marred and briefly delayed a massive burial for the Iranian commander Qasem Soleimani assassinated in a US airstrike last week. 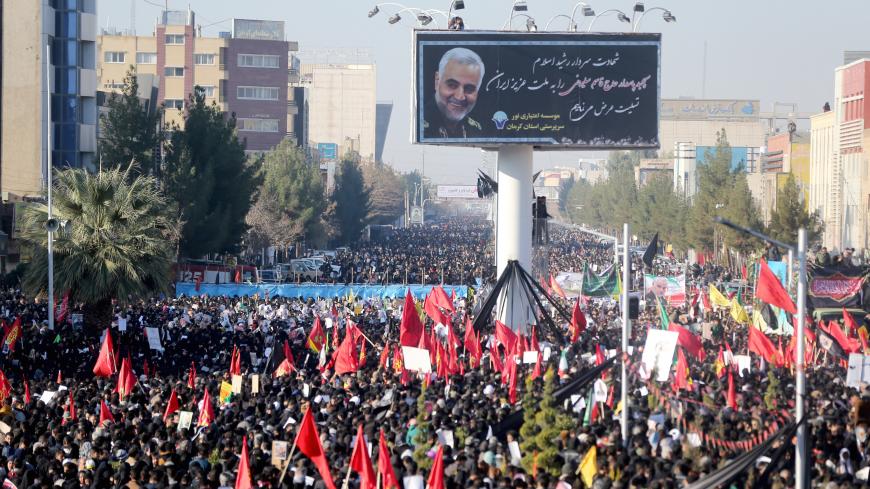 Iranian people attend a funeral procession and burial for Iranian Maj. Gen. Qasem Soleimani, head of the elite Quds Force, who was killed in an airstrike at Baghdad airport, at his hometown in Kerman, Iran, Jan. 7, 2020. - Mehdi Bolourian/Fars News Agency/WANA (West Asia News Agency) via REUTERS

Iran's health officials have confirmed that at least 65 people died as crowds of mourners marched toward a cemetery in the city of Kerman, where the commander of Iran's Quds Force, Qasem Soleimani, was laid to rest. The stampede left over 200 injured, many in serious condition, prompting officials to halt the burial for several hours.

Soleimani's body has been traveling from city to city across across Iraq and Iran since Saturday, with millions taking to the streets to bid farewell to the commander and to call for retaliation. The Iranian general and several others, including his bodyguards and Abu Mahdi al-Muhandis — the deputy chief of the Iranian-backed Iraqi Shiite militia known as the Popular Mobilization Units — were killed Jan. 3 after a US drone attack targeted their convoy as it departed Baghdad International Airport.

The death of the powerful chief of the Quds Force — the overseas branch of Iran's Islamic Revolutionary Guard Corps (IRGC) — has ignited an unprecedented war of words between Iran and the United States, bringing the two closer to a military conflict than any other time.

The last stop in Soleimani's funeral was his hometown, the southern city of Kerman. IRGC commander Maj. Gen. Hossein Salami addressed the ceremony, threatening the United States with "harsh" revenge that would make Washington "regret" the assassination. "Muslims will leave no safe place for America," the hard-line commander said, suggesting that an Iranian retaliation could be spearheaded by a widespread network of regional proxies that Soleimani's Quds Force has boosted and expanded over the years.

Iran has not specified the timing and the magnitude of its response, but warnings of the sort have been incessantly issued from commanders and civilian officials. In the latest, state media quoted Adm. Ali Shamkhani, the secretary of Iran's Supreme National Security Council, as saying that the Iranian leadership has 13 options on the table, "the slightest one" of which would pose a "nightmare" to the US government. The council, however, denied the report.

Even to Mohammad Javad Zarif, Iran's moderate and pro-engagement top diplomat, punishment is unquestionable and will be "painful." At a Foreign Ministry building just named after the assassinated commander, Zarif attacked the US president for his "big gamble" by ordering the Soleimani assassination. The Iranian foreign minister confirmed that the US government had denied him a visa to attend an upcoming UN summit in New York, a decision he dismissed as proof of "the Trump regime's bankruptcy."

In yet another important development, the Iranian parliament passed an urgent bill dubbed the "harsh vengeance," designating the entire Pentagon as a "terrorist" entity. The bill obliges the government to further strengthen the Quds Force by injecting an additional 200 million euros into the organization's budget for the last two months of the Iranian fiscal year ending March 21, 2020.

Known for his pragmatism and nonpartisanship, Soleimani has long been viewed as a national hero by Iran's mainstream political forces. Within that typically divided spectrum, where Reformists and hard-liners agree upon little, Soleimani's death has gathered everyone behind the flag, sparking unanimous calls for punishment to be exacted.

Despite their opposing editorial lines, papers covering the Jan. 6 funeral in Tehran highlighted the theme of retaliation among mourners. Kayhan, affiliated with the supreme leader's office, spoke for the mourners: "We are all time bombs as the revenge day nears." Hard-line Vatan-e Emrooz applauded "the uprising for revenge," and the Reformist Aftab-e Yazd interpreted the same message from the crowds, or, as it called them, "the avengers of Soleimani's blood."