What’s ahead for Rouhani with death of ‘moderation sheikh’?

Headlines and analysis of what is next continue to dominate Iranian media in the aftermath of the death of Ayatollah Ali Akbar Hashemi Rafsanjani. 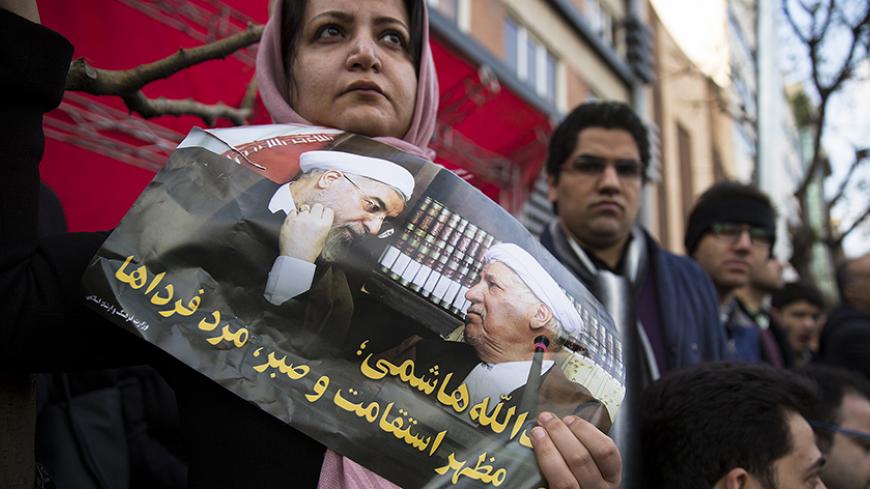 It has been three days since Ayatollah Ali Akbar Hashemi Rafsanjani passed away, but Iranian media is still buzzing with coverage of the former two-time president. If anything, the wave of reactions to the death of the Expediency Council chairman doesn’t seem to be subsiding.

On Jan. 11, one day after Rafsanjani’s funeral — which saw at least 2.5 million mourners on the streets of Tehran — Iranian newspapers’ front pages were all dedicated to the sudden death of one of the “pillars” of the Islamic Republic.

The Reformist daily Ghanoon highlighted the number of mourners, running the headline “Similar to the [people’s] farewell to the Imam [Ayatollah Ruhollah Khomeini].” Another Reformist outlet, Aftab Yazd, ran the headline “For the love of Hashemi [Rafsanjani].” The government-run Iran newspaper chose the headline “The history-making farewell,” and the moderate Ettelaat referred to the event as “The funeral of the great man of the revolution on the shoulder of the sad nation.” Referring to the attendance of people from across the political spectrum at the funeral, the Reformist Shargh daily ran the headline “The political confluence.”

Conservative newspapers also decided to dedicate their front pages to Rafsanjani, displaying pictures of the many mourners. Hinting at Rafsanjani’s burial at the mausoleum of the founder of the Islamic Republic, Ayatollah Khomeini, Javan newspaper on Jan. 11 chose the headline “Sleeping beside the Imam [Khomeini].” Meanwhile, two hard-line newspapers that have consistently targeted Rafsanjani over his political approach also led with reports of the funeral. Vatan-e Emrooz's Jan. 11 headline was “Magnanimous farewell,” and Kayhan daily went with “People committed to the [Supreme] Leader did their best for the friend of the Leader [Ayatollah Ali Khamenei].”

Calling the late president “The dear Ayatollah,” the hard-line Kayhan newspaper, known for its fierce attacks on Rafsanjani, wrote Jan. 11, “The sudden demise of Ayatollah Rafsanjani deeply saddened both advocates and opponents of Hashemi Rafsanjani, and we could see the hatred of Western and Arab media toward Hashemi Rafsanjani through their strategy [in terms of coverage of his death].”

Reza Seraj, a hard-line analyst, wrote on conservative Mosalas Weekly’s Telegram channel Jan. 11, “The late Hashemi Rafsanjani sought to … establish a new current with his leadership. Hashemi’s project was to create a bigger current than the other currents and turning it into the major and determinative player in the Islamic Republic.”

Predicting potential developments in the aftermath of Rafsanjani’s death, Seraj wrote, “Leadership vacuum in the West-oriented [political] current," “The process of [persuading] the Islamic Republic to accept the West will become slow," “Disagreements among the West-oriented [political currents] in post-Rafsanjani [Iran],” “The weakening of [moderate President Hassan] Rouhani’s bargaining power inside the Islamic Republic” and “Bypassing of Rouhani by some Reformists.”

In contrast to Seraj, outspoken Tehran University professor Sadegh Zibakalam said Jan. 11, “During the past 48 hours, it has repeatedly been said that the reform has lost its father and that the moderation current has gone aground, but I believe that all these arguments are wrong [based on] what happened at Hashemi’s funeral.”

Explaining his reasoning, Zibakalam said, “The demise of Mr. Hashemi Rafsanjani will lead many of those who had become disappointed with reform ... to be persuaded to vote for Rouhani. I assure you that the youth and people who were saying that Rouhani hasn’t shown a very good performance and that they won’t vote for him will passionately vote for Rouhani.”

Of note, members of the Expediency Council — including its chairman — are directly appointed by the supreme leader. The council is tasked with resolving differences between parliament and the Guardian Council.