Millions of Iranians turn out for Rafsanjani funeral 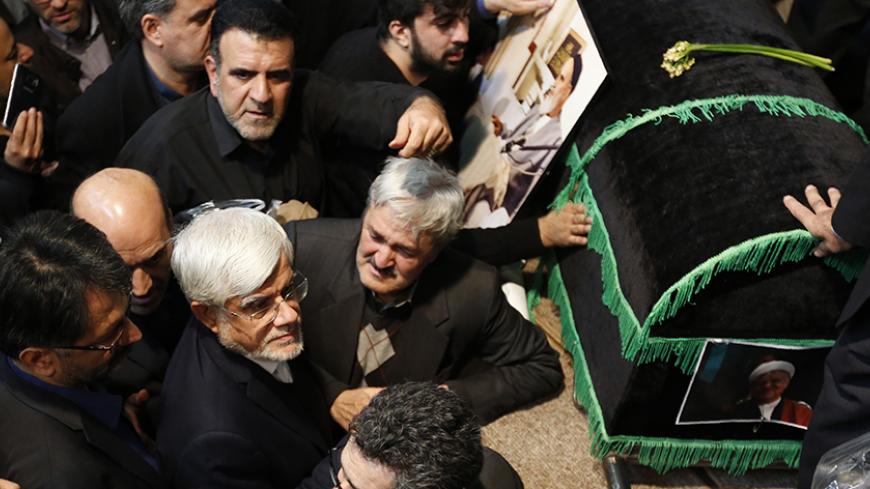 TEHRAN, Iran — Two days after the death of Ayatollah Ali Akbar Hashemi Rafsanjani on Jan. 8, an unexpectedly large number of Iranians took to the streets of Tehran for the funeral of the two-time president and Expediency Council chairman.

The funeral was scheduled to take place at Tehran University at 8:30 a.m., and people began gathering at the venue an hour before the ceremony was slated to begin. The crowd quickly grew so large that police had to shut down a number of streets to prevent an outright stampede.

During the first hours of the funeral, the number of people on the streets was estimated at more than a million, but Hossein Ali Amiri, vice president for legal and parliamentary affairs, later announced that the number of mourners was around 2.5 million. Media described the turnout as “historical” and the “second biggest funeral after the Imam,” meaning Ayatollah Ruhollah Khomeini, leader of the Islamic Revolution and founder of the Islamic Republic. More than 10 million people turned out for Khomeini's funeral in 1989.

Among the slogans Rafsanjani and Khatami supporters chanted were “Hashemi, your path will be continued,” “Salutations to Hashemi,” “It’s the mourning day, the Amir Kabir of Iran is before God,” and “Rouhani, Khatami, condolences.” The slogans were, however, censored by Iranian state TV.

The funeral was emotional, with a lot of people openly crying. A picture of an apparently sorrowful Rouhani circulated on social media, showing him at the funeral of the man who was referred to as his “spiritual father.” Rouhani is said to have cried deeply at the Martyrs Hospital in the northern Tajrish district, where Rafsanjani passed away.

Iranian state TV, which is controlled by hard-liners, covered the funeral, but not to an extent that satisfied moderates and Reformists. For instance, Rafsanjani supporters have pointed out that there were no videos or pictures aired from helicopters to show the large number of people who came to bid the ayatollah farewell. In response to the criticism of media coverage of the funeral, Ali Asgari, head of the state broadcaster, said, “We accept the criticisms, and we will try to improve our performance.”

In a separate but related controversy, a video was released on social media a day before the funeral showing Rafsanjani's son Mehdi Hashemi Rafsanjani — currently serving a 10-year sentence for embezzlement but who was granted furlough to attend his father’s funeral — supposedly stopping Asgari from approaching his father's coffin at the family residence. Hashemi strongly denied the allegation, saying that he was actually inviting the media boss to enter his father's home. Rafsanjani supporters felt that state TV had been biased against him for many years.

After Khamenei's funeral prayer, Rafsanjani’s body was taken to Khomeini's mausoleum to be buried beside him south of Tehran. It took some two hours to reach the site because of the crowds blocking the progress of the hearse. During the burial ceremony, Gen. Qasem Soleimani, commander of the Quds Force, the IRGC’s foreign operations branch, appeared unexpectedly to offer Rafsanjani’s wife his condolences. In an interview on state TV, Soleimani said, “Mr. Hashemi maintained his premier position to the end. Sometimes, his tactics were different, but he was both anti-arrogance [anti-American] and anti-enemy.”

After the burial, Rafsanjani’s family released a statement thanking mourners. “Millions of people saw how God rewarded him [Rafsanjani] after showing patience amid the poisonous arrows of the attacks and accusations,” the statement also read, referring to responses by hard-line political opponents over ideology and approaches. “Hashemi’s love for the people has made his death impossible. Hashemi is alive as long as the revolution is alive, and Hashemi’s approach will last.”

Amid the funeral, many conservative, moderate and Reformist figures recalled the “unfair” criticisms of Rafsanjani over the years. Ali Akbar Nategh-Nuri, a leading moderate figure who played a crucial role, along with Rafsanjani, in Rouhani's victory in the 2013 presidential election, said on state TV, with a lump in his throat, “Our people are still shocked. … The loss of Hashemi will be sensed the more time passes.”

Nategh-Nuri, head of the supreme leader’s Inspection Office, added, “The unfairness is that nobody was hurt to this extent. Why? Aren’t we Muslims? … As long as Hashemi was alive, they were saying that he does this and that, but after his death, all the channels of Voice and Vision [the state broadcaster] are praising him, and this is useless, because he is gone.”

Moreover, Mohsen Rafigh Doost, who served as minister of the IRGC before turning the guards into an independent military organization, said, “Many [figures] must go to God crying to be forgiven [for their attacks against Rafsanjani]. … We pray that God forgives those who went too far.”

Hassan Ghafouri Fard, a prominent conservative figure, said, “I wish the same kindness the media are showing to Mr. Hashemi had been shown in the past.”