Iran’s Khamenei vows ‘definite’ revenge for US killing of Soleimani

Iran’s supreme leader said revenge for the killing of Maj. Gen. Qasem Soleimani is a definite plan, as he called on regional nations to push for the ouster of US forces. 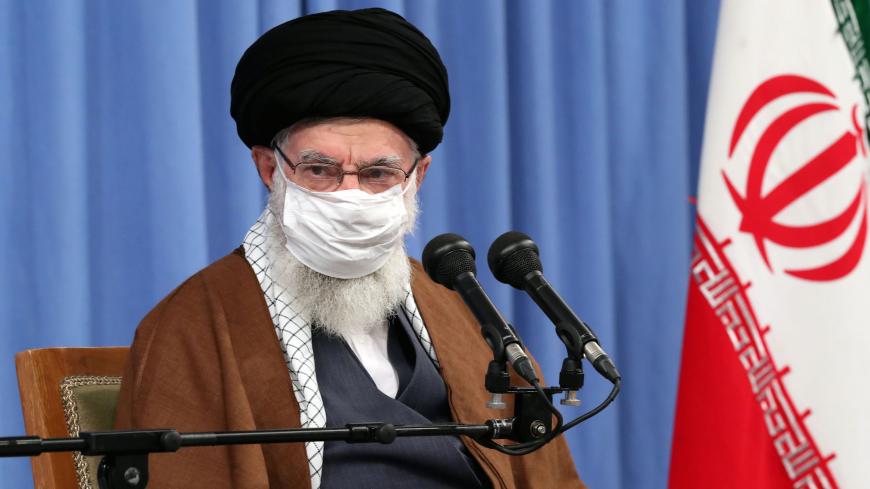 Iranian Supreme Leader Ayatollah Ali Khamenei is seen on Oct. 24, 2020, wearing a protective face mask as he gives a speech in the capital, Tehran, during a meeting of the national staff to discuss the issue of the novel coronavirus pandemic crisis, in this photo provided by Khamenei's office. - KHAMENEI.IR/AFP via Getty Images

Iranian Supreme Leader Ayatollah Ali Khamenei promised to avenge the blood of his most favored military commander, Maj. Gen. Qasem Soleimani, who was killed in a US airstrike outside Baghdad’s international airport in January. Khamenei the revenge on those who ordered the assassination and executed it is “definite,” but he did not specify any timing.

The Soleimani killing, directly ordered by President Donald Trump, pushed Iran and the United States to the brink of war. Five days into the assassination, Iran targeted the Ain al-Asad airbase hosting US soldiers in neighboring Iraq with over a dozen missiles. The attack, which was reportedly launched with a prior notice, killed no one but did cause US troops to suffer traumatic brain injuries.

During his speech Dec. 16, Khamenei looked back at the strike as just a “slap,” noting that part of the real revenge for “the national hero” will be exacted with the ouster of US forces from the region. That goal, he argued, will be gained with regional “resistance,” a term Iran uses to describe a wide network of proxies it has been nurturing and funding across the Middle East to advance its agenda, including a struggle against the US military presence.

Iran’s regional activities in recent years has been at the heart of Western worries, repeatedly raised during talks that culminated in the 2015 Iran nuclear deal, formally known as the Joint Comprehensive Plan of Action (JCPOA). Tehran, however, has persistently resisted negotiating the matter, claiming that such activities are conducted at the behest of sovereign governments.

The JCPOA itself has been hanging by a thread since the US withdrawal and a series of executive orders by Trump in and after May 2018, which led to a reintroduction of crippling economic sanctions on the Islamic Republic. Trump’s departure from the White House in January and signals by President-elect Joe Biden about rejoining the accord have boosted hopes in the ending months of President Hassan Rouhani’s administration for negotiating sanctions relief and salvaging the fragile deal.

Nonetheless, Khamenei, who has the final say in Iran’s key foreign policy matters, noted in his speech that the Rouhani government’s priority should be attempts to “neutralize” the impact of the sanctions rather than have them lifted: “Do not trust the enemy,” he said, downplaying possible talks with the incoming American president two days after Rouhani had suggested readiness to negotiate the revival of the JCPOA if the United States acts toward the same goal.

Khamenei highlighted the Islamic Republic’s historical mistrust in US administrations no matter who is president. “Those are promises by the evils,” he said in what seemed to be a piece of advice for Rouhani. “And this [hostility] is not unique to Trump, whose departure you may think could put an end to everything. No! [President Barack] Obama as well treated the Iranian nation with evilness.”