President Hassan Rouhani said Iran will avenge the US assassination of its top commander Qasem Soleimani and will continue to seek the ouster of American forces from the region. 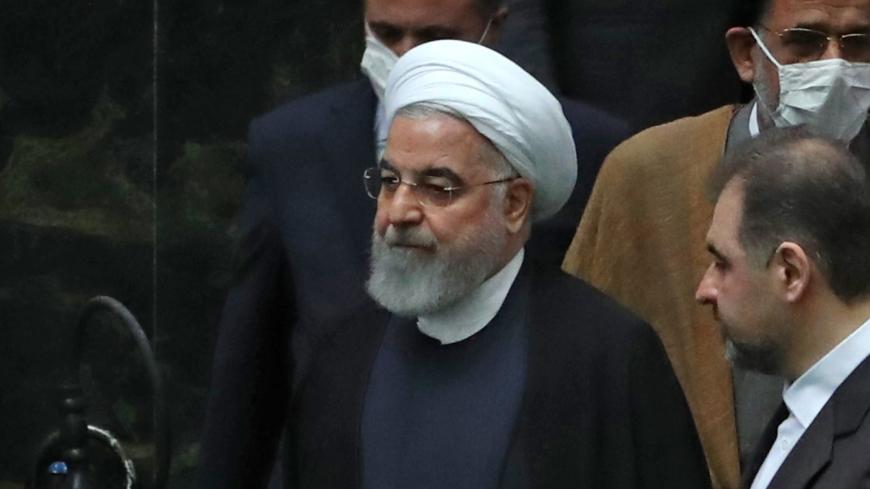 Iranian President Hassan Rouhani arrives for the inaugural session of the new parliament in Tehran on May 27, 2020, following February elections. - AFP via Getty Images

President Hassan Rouhani has again vowed revenge on the United States for last year's killing of Iran’s most powerful general, Qasem Soleimani, who was the head of the country’s overseas military operations unit known as the Quds Force.

Accusing US President Donald Trump and Secretary of State Mike Pompeo of the “savage assassination,” Rouhani warned Dec. 29  that Iranians “won’t let them get away” and have “every right to avenge the blood of their popular commander.”

The Iranian president gave Soleimani full credit for flushing the Islamic State out of neighboring Iraq and Syria, and explained his killing as a sign of the US government’s unease with his achievements against the terror group, which he said was “nurtured” by the West and Zionists and was seeking to disrupt the Middle East.

Since the deadly Jan. 3 strike on Soleimani’s convoy in Baghdad, the Islamic Republic has repeatedly promised retaliation. In the immediate aftermath, Supreme Leader Ayatollah Ali Khamenei, also Iran’s commander in chief, ordered a ballistic missile attack on the US-run Ain al-Asad airbase in neighboring Iraq. “But that was just a small slap in the face,” Rouhani said during his last 2020 address to the Iranian Cabinet.

“As long as you are in the region, our revenge has yet to be exacted,” the Iranian president added, referencing the US military presence, which Tehran has persistently opposed. Describing the fight as “resistance,” the Islamic Republic has targeted American interests through proxy militia it has been funding and training over decades. The US “maximum pressure” policy introduced by President Donald Trump has, however, shrunk Iran’s cash reserves, reportedly affecting its ability to assist such groups. Yet Rouhani noted with defiance that despite Soleimani’s death, “Resistance is continuing with the same zeal and enthusiasm.”

In an ongoing escalatory episode in recent days, Iran and the United States have been engaged in harsh rhetoric after the US Embassy in Baghdad was targeted with a series of rocket attacks blamed on Iran-backed forces, and the United States dispatched a guided-missile submarine and two cruisers to the Persian Gulf. With the US move widely seen as a preemptive measure in preparation to neutralize Iranian plans on the one-year anniversary of the Soleimani killing, Iranian Foreign Minister Mohammad Javad Zarif warned, “Washington will be responsible for any adventurism in the region.”

Speculation has been rife recently in Iranian media circles about a possible new cycle of tensions to be triggered by Trump before his departure from office next month. His Iranian counterpart said Dec. 29 that the region should enjoy better stability and security once the "heinous murderer" is out of the White House.