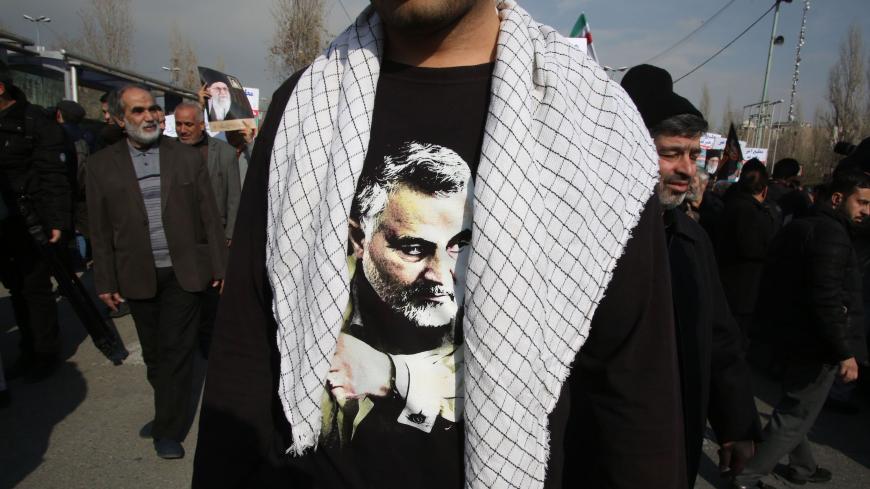 An Iranian wearing a t-shirt with a picture of slain commander Qasem Soleimani takes part in a demonstration in the capital Tehran on Jan. 3, 2020, against the killing of the Iranian Islamic Revolutionary Guard Corps' top commander in a US strike in Baghdad. - ATTA KENARE/AFP via Getty Images

“President [Donald] Trump ordered the assassination of a national hero for Iran and a hero for the region,” said Iran’s Foreign Minister Mohammad Javad Zarif of the killing of powerful Iranian Gen. Qasem Soleimani in a US drone strike back in January. The attack on Soleimani’s convoy outside Baghdad’s International Airport also left several others dead, including pro-Iran Shiite commander Abu Mahdi al-Muhandis.

Addressing a virtual meeting of the US-based think tank Council on Foreign Relations, Zarif called the killing “a great mistake” by the United States, adding that “the book” on Iran’s retaliatory measures “is not closed.” However, he noted, “I’m not in the business of making threats,” suggesting that any decisions about retaliation lie with Iran’s Supreme Leader Ayatollah Ali Khamenei, who is constitutionally the commander-in-chief and holds the ultimate authority over all sensitive foreign policy matters.

Five days after Soleimani's killing, Iran targeted Al-Asad Airbase housing US troops in Iraq with a barrage of missiles, leaving behind a trail of destruction but no confirmed deaths. Those were not all the missiles Iran fired during that night: In a state of high alert anticipating US retaliation, Iranian forces mistakenly downed a passenger plane outside the capital Tehran, killing all 176 people on board, most of them Iranian nationals.

To the Iranian supreme leader, the attack on the American base was just a “slap in the face.” He stressed that revenge will not be complete until all US troops are withdrawn from the region. His warning prompted speculation that the Islamic Republic will take aim at American troops stationed in its vicinity through a web of regional proxies it has been nurturing and arming during the past two decades.

“Mr. Trump! Are you under the impression that to avenge the death of our martyred brother, we will go after a female ambassador in South Africa?" he said. "We will hit those who played direct and indirect roles … and this is a serious message.” Salami appeared to be denying recent US intelligence reports that pointed to Iranian plots to assassinate the US ambassador in Pretoria, Lana Marks, in retaliation for Soleimani’s death.

The Iranian general’s warning received praise from the hard-line media outlets at home, including Kayhan, which is run by the supreme leader’s office: “No matter if he is in office or not, Trump must feel confident that up until the end of his disgraceful life, he will remain within the target range of the Revolutionary Guard.”