The video was released in line with renewed threats from Iran’s hard-line establishment against a hit list of former US officials involved in the killing of Iranian Gen. Qasem Soleimani. 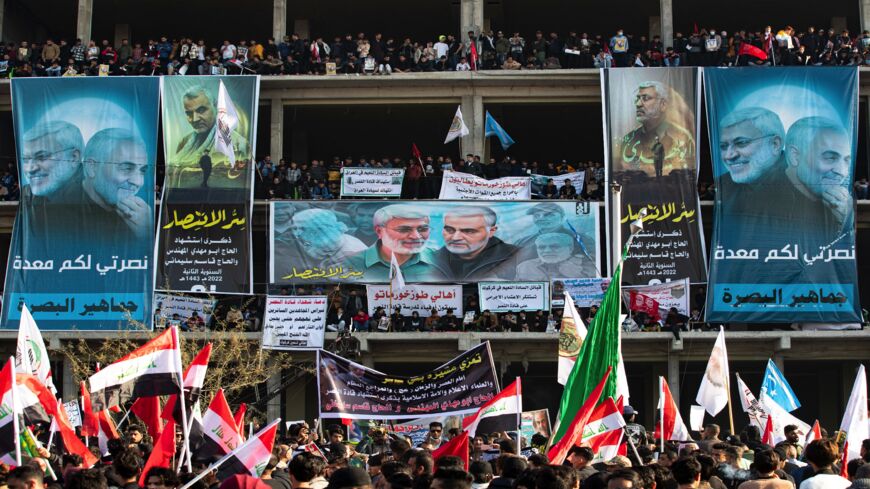 A crowd gathers during commemorations marking the second anniversary of the killing of top Iranian commander Gen. Qasem Soleimani and Iraqi commander Abu Mahdi al-Muhandis, in the southern Iraqi city of Basra, on Jan. 8, 2022. - HUSSEIN FALEH/AFP via Getty Images

The video, titled “Revenge Is Inevitable,” features an entirely remote-controlled operation. In it, a robot bypasses multiple security hurdles while an operator from another location hacks into security cameras, all before a drone is seen hovering over Trump’s head as he is busy playing golf at what is depicted to be his residence in Palm Beach, Florida.

The two-minute clip, the website said, had been pulled together by a private citizen who has now won a contest organized by Khamenei’s office. The competition was held on the second anniversary of the death of Quds Force commander Gen. Qasem Soleimani who was killed in a Trump-ordered airstrike outside Baghdad International Airport Jan. 3, 2020.

Ever since, revenge has been a recurring theme in fiery speeches by Khamenei and other hard-line officials within the establishment.

Less than a week after the Soleimani killing, Iran launched over a dozen ballistic missiles at Ain al-Asad air base hosting US forces in neighboring Iraq. Khamenei said the attack was just “a slap in the face,” suggesting that more is yet to come.

Following suit, senior commanders have come out with their own threats, vowing that they will not rest easy before exacting some revenge in kind and, if need be, well inside US soil.

Only last week, Soleimani’s successor, Brig. Gen. Ismail Ghaani, issued a stern warning to Trump and other members of his entourage about some revenge that “they will not forget,” as he claimed that people on the hit list are “under our magnifying glass.” Even President Ebrahim Raisi warned during a commemoration ceremony in Tehran that Trump “will not feel safe anywhere in the world.”

The new clip was also posted on one of the Twitter accounts attributed to Khamenei’s office. The account has now been entirely removed from the platform over breach of terms and conditions.

Last year, on the first anniversary of Soleimani’s murder, another Khamenei-linked Twitter account suffered the same fate after it published a poster carrying the message “Revenge Is Definite” on a picture of Trump playing on his golf course.

Unsurprisingly, Iranian social media platforms were foaming with mixed and divided reactions of contempt and praise to the animated video. Khamenei loyalists known as “revolutionaries” reposted the clip as a message to the former US president that revenge is “a hanging sword” over his head.

Government critics, by contrast, saw it as an attempt in vain and reminded others that the Islamic Republic ought to avoid risking an all-out war with the United States by killing Trump or any other former American official.