Iran could use its position in Syria to strike against the United States and Israel as part of Tehran's retaliation for last week's killing of Islamic Revolutionary Guard Corps Maj. Gen. Qasem Soleimani. 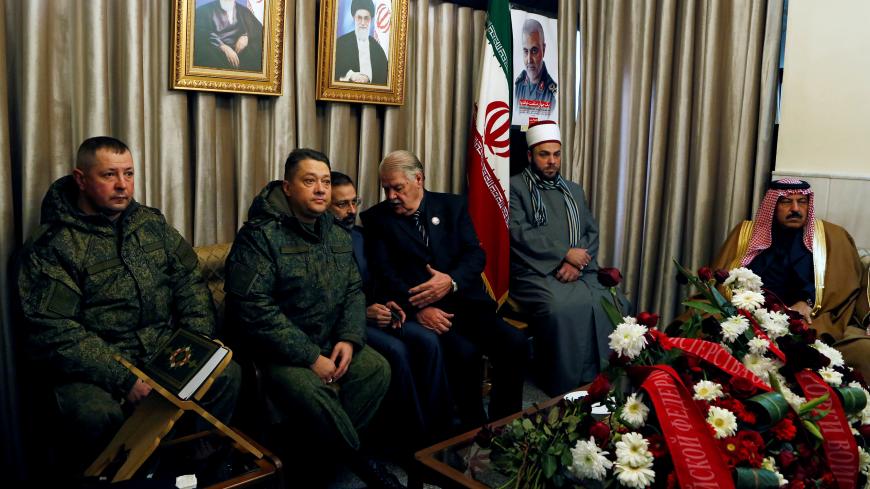 The assassination of Iranian Quds Force commander Maj. Gen. Qasem Soleimani by a US strike in Baghdad has already pushed the Middle East toward a new, higher phase of tensions. While Iranian officials are repeatedly talking about a “hard revenge” against the United States, US President Donald Trump has threatened that any retaliatory move by the Islamic Republic would result in an American attack against 52 sites inside Iran, “some at a very high level and important to Iran and the Iranian culture.”

In Iraq, the American strike — which also resulted in the death of Abu Mahdi al-Muhandis, the deputy chief of Iraq’s Popular Mobilization Units — has been widely seen as a breach of Iraq’s sovereignty and of the security agreements between Baghdad and Washington. As a result, the Iraqi parliament voted Jan. 5 for the expulsion of American troops from the country.

Meanwhile, although much international debate is focused on the time and the nature of Iran’s retaliation, as well as the implications of the current crisis on the future of Iraq, Soleimani’s killing could also seriously impact another regional hot spot, Syria. In fact, Soleimani was known to be the mastermind behind Iran’s strategy to keep Syrian President Bashar al-Assad in power and then to fight the Islamic State (IS) in Syria and Iraq. In November 2017, it was Soleimani who, in a letter to Iranian Supreme Leader Ayatollah Ali Khamenei, officially declared the end of IS rule in Iraq and Syria. The Islamic Revolutionary Guard Corps general was also believed to be personally in charge of establishing and coordinating a wide network of Shiite fighters from Iraq, Syria, Lebanon and even Afghanistan and Pakistan to fight alongside the Syrian army against the rebel and terrorist groups.

As such, one might expect Soleimani’s death to cause challenges for Iran’s policy in Syria. However, while Soleimani’s loss as a smart strategist and a charismatic field commander will be undoubtedly felt by the Islamic Republic, Tehran’s overall influence in Syria is unlikely to be diminished as a result.

In his decree appointing Maj. Gen. Esmail Ghaani as Soleimani’s successor, Ayatollah Khamenei made it clear that the Quds Force must stick to “the same plan” it had under Soleimani. As far as the Syrian part of that plan is concerned, Ghaani seems not to have any major problem in continuing Soleimani’s work uninterrupted. In fact, the new commander, who worked for more than 10 years as Soleimani’s deputy, is better known in Iran as the “Damascene General” because of his important role in the Quds Force’s activities in Syria. Former Islamic Revolutionary Guard Corps chief commander Mohsen Rezaee has said Ghaani has had a “serious role” in both Syria and Iraq.

These personal aspects of the Quds Force policy in Syria aside, the Islamic Republic has also taken some steps at the governmental level to reassure its allies in Syria on the continuity of its approach toward the Syrian conflict. On Jan. 5, Iran's Supreme National Security Council Secretary Ali Shamkhani hosted Ali Mamlouk, head of Syria's National Intelligence Bureau, who was in Tehran to express condolences on behalf of Assad over Soleimani’s killing. The meeting reportedly focused on Iran-Syria “coordination during the next stage.” Meanwhile, commenting on the potential impact of Soleimani’s death on Iran’s cooperation with Russia in Syria, Foreign Ministry spokesman Abbas Mousavi said, “We do not think there will be any gap in this regard.”

However, these points do not mean that Iran’s policy in Syria will be all about continuity. Instead, certain elements of change are expected to dominate Tehran’s overall strategy in Syria. Mostafa Najafi, a Middle East analyst at Tehran’s Tarbiat Modarres University, said he believes that the current course of events could lead Iran and its allied groups in Syria to take an offensive posture against Israel and that there is the potential for a clash in Syria’s south and southwest. “I think the US move to terrorize Gen. Soleimani was in fact an upgraded phase of Israel’s policy of targeting Iranian interests in Syria. Washington did for Tel Aviv what it couldn’t do by itself,” Najafi told Al-Monitor. As such, it appears possible that Iran could abandon its policy of “strategic patience” against Israel and try to open the northern front against Israel. According to Najafi, “Iran feels the need to act in order to prevent Israel and the US from turning the policy of targeted attacks against Iranian positions into an established procedure.”

Meanwhile, as Iran's primary goal in Iraq and Syria may turn to facing the United States and Israel and as the international anti-IS coalition pauses its mission in Iraq to protect its troops, IS terrorists may try to reorganize their ranks and restart their activities in the volatile areas bordering Iraq and Syria. An IS revival in Syria would likely involve the eastern parts of the country, where US bases are located. In such a situation, although Iran-backed groups stationed in Deir ez-Zor province will continue guarding their own positions against IS, they might start pushing IS toward the US positions in order to make life harder for the Americans. This could be the start of Iran’s “selective fight” against IS in Syria.

The tense situation that has emerged in the aftermath of Soleimani’s assassination could also affect Iran’s long-term approach in Syria. Since the collapse of the self-proclaimed IS caliphate in 2017, Iran has been gradually shifting its focus from playing a direct military role in the Syrian conflict to trying to define a major role for itself in the process of Syria’s postwar reconstruction. While avoiding getting directly involved in the major Syrian battlefields over the past two years — such as the Syrian army’s campaign to recapture Idlib — Tehran concluded a number of nonmilitary agreements with Damascus in various fields, from transportation to construction and banking cooperation. However, the necessities of a potential face-off with the United States or Israel may lead Iran to direct all available resources toward strengthening its military positions, resulting in an indefinite delay in the realization of Iran’s economic plans in Syria.

As such, Iran’s strategy in Syria after the death of Soleimani is expected to contain both offensive and defensive elements, looking at Syria as a potential scene for “taking revenge” against the United States and Israel, while also working to preserve its influence in the Arab country by strengthening its military positions.