A number of developments, including Turkey's greater involvement in Syria and the US assassination of Iranian Maj. Gen. Qasem Soleimani, may be driving Iran's move to get more involved in Idlib battlefield operations. 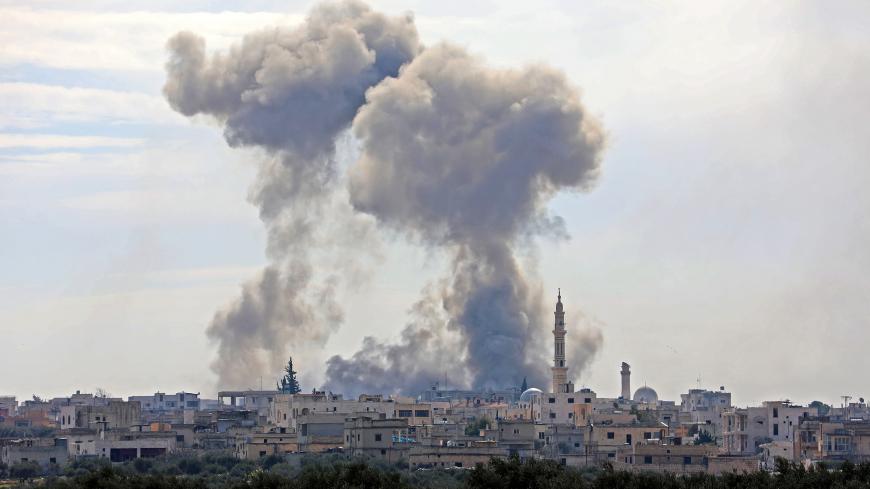 Plumes of smoke billow in al-Nerab in Idlib province, Syria, Feb. 3, 2020. A number of Iranian and Iranian-backed groups backing the Syrian regime have been reported to have been dispatched to the Idlib and Aleppo fronts. - OMAR HAJ KADOUR/AFP via Getty Images

The Syrian army’s ongoing military operation in the northwestern province of Idlib has resulted in a number of strategic gains for President Bashar al-Assad’s government. On Jan. 28, the Syrian army recaptured Maaret al-Numan, a strategic town south of the city of Idlib, from rebel and terrorist groups. The achievement was seen as an important step to regain full control over the M5 highway that connects Damascus with Aleppo. As has been the case with the previous rounds of the Syrian army’s operations in Idlib, the recent advances were made possible by Russian air support for the Syrian forces. However, what has been new this time is the active presence of Iranian and Iranian-backed forces on the battlefield that has been reported.

The British newspaper The Daily Telegraph published a report Jan. 26 containing leaked radio communications from Iran-backed Afghan fighters known as the Fatemiyoun Division showing their involvement in the ongoing battles in Idlib. The newspaper said the estimated number of Fatemiyoun forces in Idlib is between 400 and 800. Earlier in January, there were media reports, citing Turkish intelligence, that several Iran-backed groups in Syria had been deployed to the Idlib and Aleppo fronts. On Jan. 27, US Secretary of State Mike Pompeo criticized “the combined forces of Russia, the Iranian regime, Hezbollah, and the Assad regime” for conducting a massive assault on Idlib and western Aleppo.

Despite its persistent military and political support for the Assad government, the Islamic Republic had refrained from getting involved in the previous rounds of the Syrian army’s operations in the country’s northwest. As such, Tehran’s decision to assist the Assad government in its current military campaign in Idlib could be considered an important development.

If we are to discuss the reasons behind Iran’s change of course regarding Idlib, first we should take into account the situation that emerged after the Jan. 3 assassination of Iranian Quds Force commander Maj. Gen. Qasem Soleimani by the United States. Removing Soleimani, the mastermind behind the Islamic Republic’s regional strategy, resulted in speculation that Iran would start to lose influence in Syria. Such a possibility appeared to cause concern even for Assad, who quickly decided to dispatch his intelligence chief Ali Mamlouk to Tehran to talk with Iranian officials about their “coordination during the next stage.”

As such, Iran’s recent involvement in Idlib could be seen as both trying to send a message to its rivals that its power and influence in Syria have remained intact, and reassuring Assad that he can still count on Tehran’s support where and when needed. This reassurance effort was also evident when the Fars news agency — affiliated with Iran's Islamic Revolutionary Guard Corps (IRGC) — published a report Jan. 26 underlining the role of the Quds Force in preventing the collapse of the Assad regime since the early stages of the Syrian uprising. This was the first time a semi-official Iranian news agency had written about the role of the IRGC's Quds Force in Syria before the rise of the Islamic State (IS) in 2013.

Another factor contributing to a change of Iran’s viewpoint toward Idlib could be the changing priorities of Turkey in Syria and the region. At least since the US withdrawal from the nuclear deal with Iran in May 2018, a major reason behind Tehran’s hesitation to get directly involved in the Syrian government’s military moves in the northwest was its concern not to lose Ankara as a partner in circumventing the revived US sanctions. Turkey has been opposing the Syrian government’s military campaign in Idlib, supporting most of the rebel groups stationed in the area.

However, there have been growing signs recently that Turkey is shifting the main focus of its regional policy from Syria to Libya, with hundreds of Turkish-backed rebels being deployed from Syria to the North African country to assist the Government of National Accord, which is struggling against an insurgency led by Gen. Khalifa Hifter. Meanwhile — and for the first time since 2011 — Hakan Fidan, the head of Turkey’s National Intelligence Organization, met with his Syrian counterpart Ali Mamlouk in Moscow on Jan. 13. The meeting was seen as a possible starting point for a change in Ankara’s approach toward Syria. However, the latest clashes between the Syrian and Turkish militaries in Idlib, which resulted in the death of at least six Turkish soldiers, are a sign that Ankara and Damascus are still far from any kind of rapprochement. However, Iran’s policy change in Idlib might have been based on the calculation that Turkey is either unwilling or unable to sustain an active presence in that area.

The increasing American and Israeli pressures on Iran in Syria might be another factor affecting Tehran’s approach toward Idlib. Over the past several years, Iran’s main geographical concentration has been on Syria’s southern areas, from Daraa in the southwest to Deir ez-Zor in the southeast. However, with the heightened Israeli strikes against Iranian interests in those areas and with tensions between Tehran and Washington in the region being on the rise after Soleimani’s assassination, Iranian officials might have changed their strategic calculations on the makeup of their forces in Syria. In order to make it harder for the Israelis and Americans to target its interests, Iran might have decided to dispatch at least some of its forces to other areas, including Idlib. This way, Iran would also gain more influence on the ground in Syria, creating further obstacles for the Americans and Israelis who want to root out Tehran’s presence in Syria.

Iran’s involvement in Idlib appears to also have something to do with Iran’s grand regional plan following the killing of Soleimani, that is, attempting to expel US forces from the region. As the main concentration of the US forces in Syria is in the areas east of the Euphrates river controlled by the Syrian Democratic Forces, Tehran wants the Syrian government operation in Idlib to be concluded successfully as soon as possible so that the next step in realizing Assad’s promise to “liberate every inch of Syrian territory” could be started in the east of the Euphrates. Referring to this issue, Ali Akbar Velayati, a top adviser to Iranian Supreme Leader Ayatollah Ali Khamenei, said in a press conference Jan. 30 that “the Syrian government and its allies from the resistance front will go from Idlib to the eastern Euphrates to expel the Americans.”

All these points would mean that Iran is taking a more geographically dispersed, more offensive posture in Syria in order to adapt itself with the rapidly changing situation in Syria and the whole region. As such, Iran’s involvement in Idlib marks an important turning point in its strategy toward the Syrian crisis.