Iran witnessed some of its largest crowds for the funeral of Qasem Soleimani, who was killed in a US strike Jan. 3. 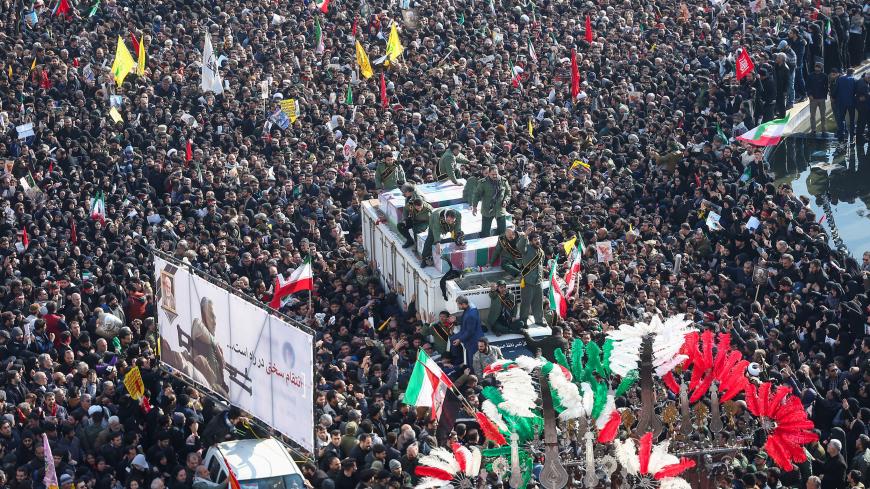 Iran officially held the funeral for the commander of Iran's Islamic Revolutionary Guard Corps' (IRGC) Quds Force, Qasem Soleimani, in Tehran Jan. 6. Supreme Leader Ayatollah Ali Khamenei, flanked by President Hassan Rouhani and judiciary chief Ebrahim Raisi, conducted the prayer service. Various processions across Iran were held in the days leading up to the funeral, drawing the largest crowds Iran has seen since the 1989 funeral of the founder of the Islamic Republic, Ayatollah Ruhollah Khomeini.

While the large outpouring of mourners across a country that had just witnessed some of its most severe protests less than two months ago has caught many Iran observers by surprise, how Iran will galvanize this sentiment and how it will respond to the US assassination of Soleimani is still being debated.

Ali Shamkhani, secretary of the Supreme National Security Council, told Ali Mamlouk, special security adviser to Syrian President Bashar al-Assad, “Our response to this crime will certainly be militarily, but it will not be limited to military actions.” Mamlouk is in Tehran as Assad’s representative for Soleimani’s funeral.

Shamkhani added, “After committing this crime with lies, the Americans tried to portray the people of this region as being happy over the martyrdom of these two warriors. But the wave of angry people in mourning … revealed their big lie.” Along with Soleimani and 10 others was Abu Mahdi al-Muhandis, a commander of Iraq’s Popular Mobilization Units, which is also known as Hashid Shaabi. Shamkhani added, “The blood of these martyrs made the unity in Iran and Iraq a hundredfold.”

Ali Akbar Velayati, foreign policy adviser to Khamenei, said, “The Americans did an idiotic thing [by martyring] Soleimani, and they have to leave the region. Experience has shown that in facing Iran and the resistance, they have always failed.” He added, “If the United States does not leave the region, it will be another Vietnam for them.” In listing his achievements, Velayati said that Soleimani had “the closest relationship with Russia’s president,” Vladimir Putin.

The third feature maintains that “the result of revenge will be strategic and not tactical.” One of the end results of revenge would be “the expelling of Americans from Iraq and the region.” The fourth feature holds that those exacting revenge would be “transnational.” Given that Soleimani was a “transnational and international figure” who helped “resistance groups” across the region, these groups — even acting independently, according to the article — could take revenge.

The fifth feature, stated the article, is that Americans “can never be at ease from revenge; they must expect any type of revenge at any level — responses some of which are from Iran and other responses that are completely uncontrollable … from resistance groups.”