With the presidential election one year away, the Iranian press is already speculating about Quds Force commander Qasem Soleimani entering the race. 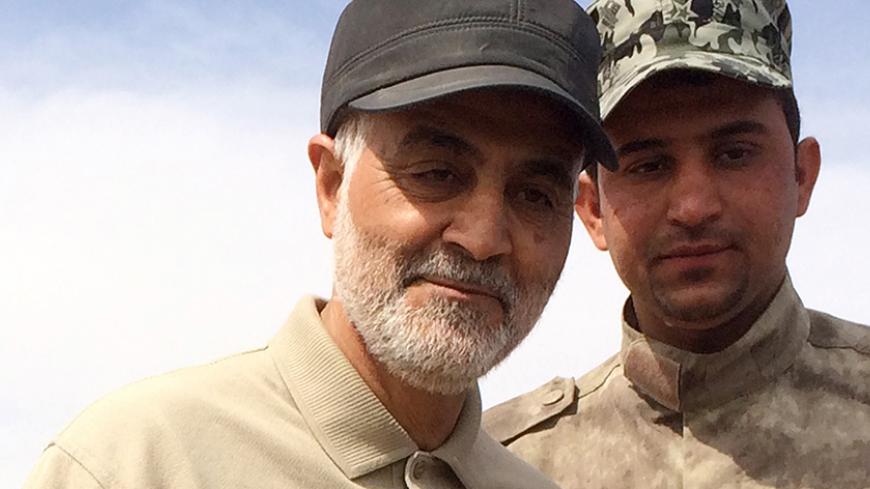 With the rise of the Islamic State on Iran’s western and eastern borders, Maj. Gen. Qasem Soleimani, the head of Iran’s Islamic Revolutionary Guard Corps (IRGC) Quds Force division, which is responsible for Iran’s military operations outside of its borders, became one of Iran’s most popular figures. When the Iranian general allowed himself to be photographed at the front lines of bloody wars, his popularity soared and he was often compared to Iran’s popular and social media-savvy top diplomat, Foreign Minister Mohammad Javad Zarif.

With the massive popularity has now come speculation and concern that Soleimani, who has mostly kept a cool distance from partisan politics in his nearly 20 years as head of the Quds Force, could run in the upcoming presidential election. Conservatives may like to run popular figures like Soleimani, and many Reformists and moderates would likely be reluctant to run against someone of Soleimani’s stature.

Mohammad Atrianfar, a seasoned journalist and senior member of the Executives of Construction Party, told Reformist Aftab-e Yazd June 13, “[Soleimani] has proudly spent his entire life in a revolutionary and sacred institution … he knows his work well. Someone like him who is wise will not easily put his activities down in order to enter something he does not have experience in.” Atrianfar added that it would be natural for conservatives to try to push Soleimani’s candidacy, but he believes that Soleimani would ultimately turn it down. “I don’t think Soleimani will ever become a presidential candidate," he said.

Not only Reformists may be concerned about running against Soleimani. Akbar Torkan, a special adviser to President Hassan Rouhani, told Reformist Armany Daily June 14 that although he finds Soleimani’s candidacy unlikely, he is “one of the revolutionary symbols.” Torkan said, “He is popular among all the people and he transcends [partisan] movements.” Running against someone as popular as Soleimani presents numerous challenges, and Rouhani and his team would undoubtedly very much like to avoid being the first one-term president in Iran in three decades.

While many journalists tend to view Soleimani as being above partisan politics and thus avoid criticizing him, it is possible that that deference could change in the cutthroat political world of Iranian politics. Bahman Hedayati, a former journalist for Mehr News Agency and the current editor of Parsine, wrote May 29 that Iranian military figures tend to lose their “political stature” and immunity from criticism once they enter politics. Mohsen Rezaei, a former IRGC commander during the Iran-Iraq War, and Mohammad Bagher Ghalibaf, a former commander of IRGC's air force, both lost their protection from criticism once they chose to enter politics, according to Hedayati.

However, Hedayati believes that Soleimani’s stature is currently much higher than those of either Ghalibaf or Rezaei ever were. Soleimani also has a positive image among nationalist and secular Iranians, according to Hedayati, and he shares the image of the legendary IRGC commanders who died in the Iran-Iraq War. Hedayati believes that only journalists outside of the country will write critically of Soleimani and his chances in next year’s presidential elections are good as long as figures such as Ayatollah Ali Akbar Hashemi Rafsanjani, Rouhani and former President Mohammad Khatami do not speak against him or at least remain silent.

Since being one of the signatories to the letter warning Reformist Khatami in 1999 about the direction of the country, Soleimani has mostly stayed out of the politics. During the February parliament elections, Soleimani, while not explicitly endorsing traditional conservative candidate Ali Larijani, praised the parliament speaker just four days before the election. During the 2013 presidential election, Soleimani was believed to have supported conservative candidate Ghalibaf. At the time, the head of IRGC public relations was caught in a minor controversy when the Iranian media reported that he denied Soleimani's endorsement. He later clarified that he never spoke about Soleimani but that the IRGC would not be endorsing a candidate.