The former commander of the Islamic Revolutionary Guard Corps has left behind politics to lead a new generation of military officers. 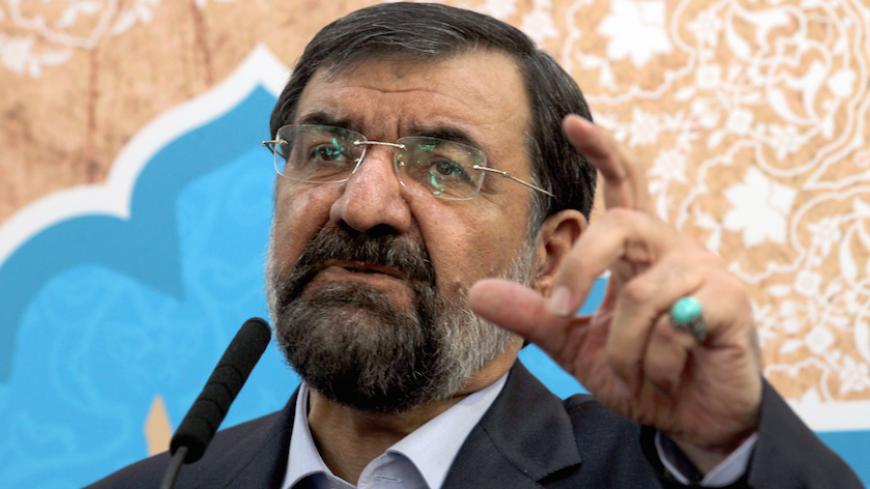 A surprising story made the front pages of Iranian newspapers April 8: “Mohsen Rezaei is back in the Islamic Revolutionary Guard Corps [IRGC].” This move could be interpreted as the end of Rezaei’s political activities.

Rezaei is the IRGC's fifth chief commander. He led this elite unit during the eight-year Iran-Iraq War, nurturing it more than his predecessors and successors. Mohsen Rafigh Doost, who served as the IRGC minister before turning the corps into an independent military organization, had put forth Rezaei's name as a candidate for the IRGC chief commander position to Ayatollah Ruhollah Khomeini. In 1981, Rezaei, 27 at the time, had abandoned his mechanical engineering studies at university before the 1979 revolution. He accepted the IRGC post and became one of the youngest military commanders in the world.

Rezaei was different from the IRGC's former commanders. He dedicated his efforts to enhancing the tactical and scientific dimensions of the military. Having encountered disputes with fellow commanders, Rezaei said during a 1981 Friday prayer in Tehran, “We should accept that we are involved in a great revolution in which all the world has created an alliance against us, so we can’t overcome the war issue only by praying, we ought to increase our military science and technological power.”

With the Iran-Iraq War coming to an end, Rezaei felt he had done his best in the IRGC and was no longer needed. He wanted to be active in other fields. In 1992, during Ayatollah Akbar Hashemi Rafsanjani's presidential term, Rezaei submitted his resignation letter to Supreme Leader Ayatollah Ali Khamenei, who refused the resignation. Consequently, after three years of Rezaei's appeals to resign, Khamenei approved his request in 1997.

Explaining why he resigned, Rezaei said, “I left the IRGC to trigger economic and cultural overhaul in society, and I believed that we shouldn’t use military tools to make this happen.” Despite his cultural and economic justifications for leaving the IRGC, Rezaei, who was seemingly eyeing the parliament chairmanship, put forth his candidacy in the 2000 election, but he didn’t obtain enough votes, and his path to parliament was blocked.

After this bitter defeat, Rezaei, who was trying to portray himself as a politician, not a military commander, started engaging in political activities, developing a good rapport with politicians and indirectly supporting a few parties.

By the end of President Mohammad Khatami’s second term in 2005, Rezaei had announced his candidacy for the presidency, but two days before the election, he withdrew to “prevent the division of people’s votes” in favor of conservatives, who had selected Ali Larijani, the current parliament speaker, as their preferred candidate. Mahmoud Ahmadinejad didn’t bow to the conservatives, leading to a breakup of the conservative camp. A few months after Ahmadinejad’s victory in the election, Rezaei began traveling around the country, lashing out indirectly at the government’s policies.

During the 2009 presidential election, Rezaei brought up new economic plans in the presidential debates. He was the only candidate who didn’t allow Ahmadinejad — who had shown immoral behavior toward other candidates — to discuss marginal issues. However, the outcome of the disputed election didn’t change, and Ahmadinejad won.

During the 2013 presidential election, Rezaei was more seasoned and prepared than before, but that still wasn’t enough to attract votes, and he lost again. Nonetheless, the election outcome showed Rezai's rising popularity, as he had gained more votes than before.

Having faced heavy blows to his political image, Rezaei realized he wouldn’t reach his goals and that it was time to return to his home, the IRGC. During the 2014 Quds Day, an event that expresses solidarity with the Palestinian people, Rezaei marched in the streets wearing the IRGC's green uniform, marking his willingness to rejoin his military friends.

Seemingly, Rezaei had been laying the groundwork to rejoin the IRGC over the past year by writing public letters to leaders of Hezbollah and Ansar Allah and signing them “Guardian of the Islamic Revolution,” alongside his name. Finally, on April 8, Hossein Kanani Moghaddam, former member of the IRGC supreme council during the 1980s, ended all speculation and announced that Rezaei was back in the IRGC.

As to whether Rezaei's return to the IRGC means he is leaving politics, Kanani Moghaddam said, “Rezaei will act based on Imam Khomeini’s recommendation.”

Ayatollah Khomeini had previously advised IRGC commanders to not get involved in politics. No members of the armed forces, "from the highest to lowest level, should enter in a party or a group, with every name and title, even if that political group or party is 100% loyal to the Islamic Republic. If anyone becomes a member of a group or party, he should quit the army, the IRGC and other military and armed forced organizations," Khomeini said.

According to Iranian newspapers, Rezaei has left the Resistance Front, which was formed as part of his presidential campaign, and handed over control to his close associates. Nonetheless, Rezaei's future role in the IRGC is still unknown. “For now, it has been decided that I transfer my experience to the future generation of the IRGC,” Rezaei said.

According to IRGC rules, military personnel aren’t allowed to participate in the political sphere. Even if Rezaei wanted to try his luck in the next election, the law wouldn't permit it.

Rezai elaborated on his decision, saying, “The next decade in the region will be turbulent, which is why I asked the supreme leader to pass my experiences to the next generations. We need power for the sake of security in the region, but the Zionist regime and Saudi Arabia have become the center of insecurity. Peace won’t return to the region unless they are put back in their places.”