With his loyalty to the supreme leader and lack of ties to established groups, Iran’s chief nuclear negotiator Saeed Jalili appears to have Khamenei’s backing. 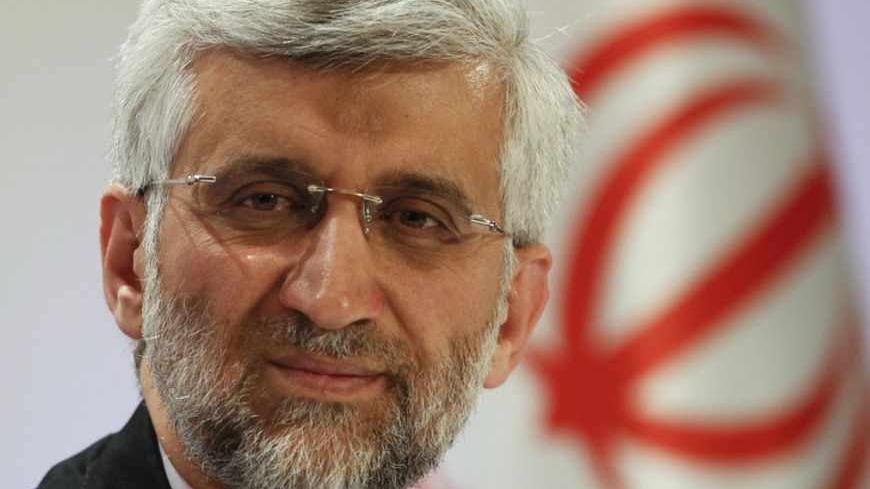 While Iran's Supreme Leader Ayatollah Ali Khamenei has repeatedly said that he does not favor any candidate in the June 14 presidential election, there is growing evidence that nuclear negotiator Saeed Jalili is the man Khamenei would most like to see replace Mahmoud Ahmadinejad.

Monday’s announcement that former speaker of the parliament Gholamali Haddad Adel, whose daughter is married to Khamenei’s oldest son, Mojtaba, is dropping out of the race will improve the chances for remaining conservatives, especially Jalili's.

The Iran-Iraq War veteran, who lost a leg in the 1980–1988 conflict, is similar to Ahmadinejad in his modest lifestyle but has a personality that is as bland as the current president’s is vivid. Jalili’s former diplomatic colleagues remember his habit of returning dollars to the Foreign Ministry after trips abroad instead of taking advantage of the widening gap between the Iranian currency and the greenback.

Jalili is also distinguished by having exhibited no prior ambitions toward the presidency. His only motivation in entering the race now appears to be a sense of accountability toward the “future of the system,” an indirect indication of backing from Khamenei’s office, where Jalili previously served. A splashy social media campaign also points to the system’s mobilization behind him.

Serious candidates among Khamenei loyalists are now down to three — Jalili, former foreign minister Ali Akbar Velayati and Tehran Mayor Mohammad Baqer Ghalibaf. The latter two are the remaining members of the so-called 2+1 Coalition. It is not clear if Velayati, who had a strong debate performance on June 7, will also drop out, but a number of polls suggest that he will not be a big vote getter on Friday.

Mohsen Rezaei, a former commander of the Iranian Revolutionary Guard Corps (IRGC) and perennial candidate, is also not likely to make it to a second round. Rezaei has strong ties to the pre-Khamenei leadership era and has been sullied by family dramas, including the apparent suicide, in a luxury Dubai hotel in 2011, of a son who had sought asylum in the United States a decade earlier. Rezaei is also linked to reports of shady financial activities, including involvement in clandestine IRGC ports.

The supreme leader signaled his displeasure with Rouhani in 2005 by replacing him as chief nuclear negotiator and secretary of the Supreme Council of National Security with Ali Larijani, a member of a trusted clerical family. Rouhani’s top aide, Hossein Mousavian, a former ambassador to Germany, was also dismissed and even jailed for a week in 2010 before fleeing to the United States. While Rouhani has defended his stewardship of the nuclear talks for having kept Iran from being referred to the UN Security Council, Jalili’s campaign has tagged Rouhani for being soft in standing up for the Islamic republic’s values, if not outright betraying them.

Ghalibaf presents a stronger challenge to Jalili because of his managerial skills. Khamenei would rather not see Ghalibaf as president, however, because the former IRGC air force commander retains influence among the military and is known for being strong willed and a maverick. In 2005, Mojtaba Khamenei, who has tremendous influence over his father’s decisions, left Ghalibaf’s campaign and threw his backing to Ahmadinejad. Mojtaba was quoted after the election by friends as saying, “Ghalibaf is as slippery as a fish in the hand.”

Jalili’s lack of executive experience and ignorance of some of the workings of the Islamic system are a plus in the supreme leader’s eyes. A pious believer in the velayat-e faqih concept — rule by the supreme jurisprudent, which justifies Khamenei’s position — Jalili can be better trusted to reflect the leader’s views in domestic and international affairs.

He has proved his loyalty to Khamenei during the recent rounds of nuclear talks and demonstrated his lack of similarity to Ahmadinejad, who turned his back on Khamenei after the 2009 elections. The child of a teacher with zero ties to the wealthy elite of the Islamic republic, Jalili has no party behind him seeking to benefit should he become president.

This lack of connections makes Jalili the best possible choice for Khamenei in the coming election. He has proven his loyalty to the supreme leader and demonstrated that he is happy to be a mouthpiece and a yes-man.

Mehdi Jedinia is an Iranian-American journalist and social media activist.