Soleimani: US power in region has declined

Quds Force head Qasem Soleimani addressed Iran's Assembly of Experts about regional issues including Iraq, US influence and the wars in Syria and Yemen. 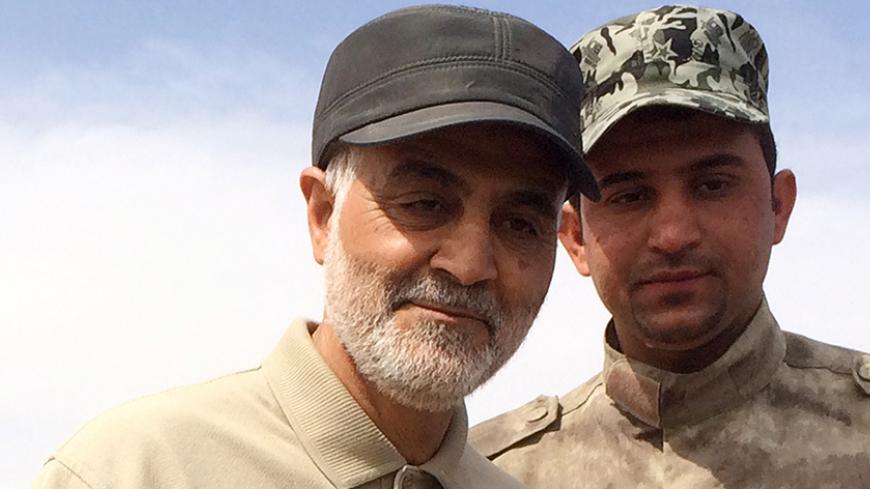 Qasem Soleimani, the commander of Iran’s Quds Force, a division of the Islamic Revolutionary Guard Corps in charge of operations outside the country’s borders, gave what was billed as “a special speech” to the Assembly of Experts Sept. 1 to discuss regional matters. Parts of the speech were shared with Iranian news agencies by members of the assembly in attendance.

In an interview with Tasnim News Agency, Assembly of Experts member Hojat al-Islam Seyyed Mojtaba Taheri said that Soleimani’s speech focused on “Iraq, Syria, Yemen, America’s roles, the enemies of Islam and the presence of [the Islamic State] and takfiris in the region.”

Taheri continued, “Gen. Soleimani said the spiritual influence of the Islamic Republic of Iran in the region has resulted in strengthening the line of resistance and the Islamic Revolution, and for this, America and Israel and their allies have been challenged.”

On the fight against the Islamic State (IS) in Iraq and Syria, Fars News reported Soleimani as saying, “America plans to preserve [IS] so that Muslims will continue to need the Americans, and in reality they have turned this into leverage.” While the US-led coalition has bombed IS fighters in Iraq and Syria, many people in the region believe not enough is being done and that the bombing campaign's tactical successes do not pose an existential threat to the terrorist group.

On the civil war in Yemen, using the formal name for Houthi militias, Soleimani said, “Ansar Allah is a people’s movement, and many people have joined them.” He said that the war in Yemen “is much harder than the war against the Taliban, but Ansar Allah has resisted for more than four months, whereas the Taliban collapsed after two months.”

Along with US advisers, Saudi Arabia, the United Arab Emirates and other members of the Gulf Cooperation Council aligned with various local forces in Yemen and have embarked on war against the Houthis to roll back their gains across the country. The so-called Arab coalition accuses the Houthis of being backed by Iran and has used the threat of Iranian influence on Saudi’s southern border to shore up support for the war. In turn, Iranian officials and their supporting media outlets became vocal advocates of the Houthis, who belong to the Zaidi sect of Islam and are believed to be working with former Yemeni President Ali Abdullah Saleh. On Saudi Arabia’s role in the war, Soleimani said, “Saudi Arabia was afraid of Ansar Allah reaching power and they imposed this war on the people of Yemen.”

On Sept. 2, former nuclear negotiator and Secretary of the Supreme National Security Council Saeed Jalili and current negotiator Seyed Abbas Araghchi will speak to the Assembly of Experts about the nuclear negotiations and the final nuclear agreement known as the Joint Comprehensive Plan of Action. Foreign Minister Mohammad Javad Zarif was originally scheduled to speak to the assembly, but was unable due to his travel schedule.

Iran’s Supreme Leader Ayatollah Ali Khamenei also met with military officials from Khatam al-Anbiya Air Defense Base and urged them to “continuously upgrade their readiness and options for various threats.” His office also issued a letter stating that his positions on the nuclear deal are clear and that other sources of information on his positions are unreliable.