Saudi Wahhabi leaders have gone on the attack to promote what they believe is the sole, Saudi claim to the restoration of the caliphate. 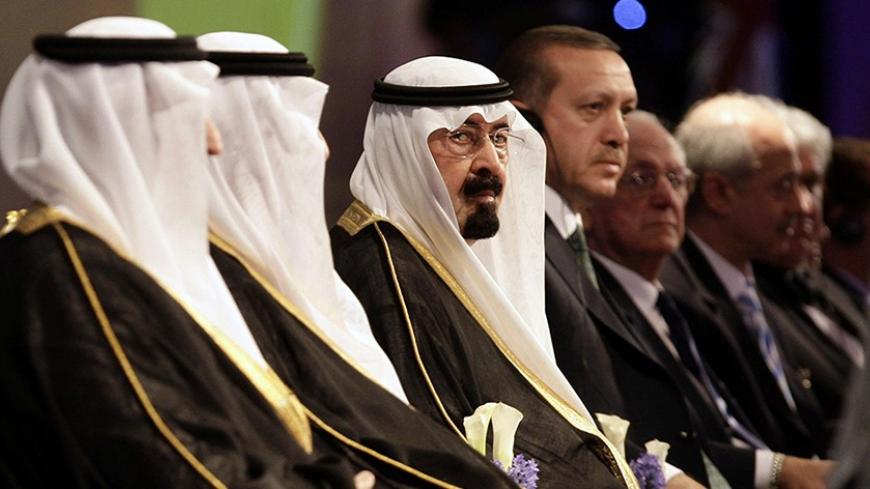 Wahhabi clerics are easily provoked upon hearing that other Muslims may entertain the idea of restoring the Muslim caliphate. They strongly believe that Muslims other than themselves are godless and unqualified to claim the honor of reviving the caliphate, a multi-ethnic transnational empire with Sharia and the bonds of faith as the basis of government.

As they consider themselves to represent the only true and pure Islam, they endorse the view that if such a caliphate is to return, they should take the lead in shaping its creed and outlook. They are therefore determined to denounce any contemporary Muslim who may entertain the idea that one day all Muslims will be united under the umbrella of a single polity. If such a unification were ever possible, they themselves should be the only active agents in its birth, regardless of how remote or unrealistic this possibility might be.

The restoration of the caliphate remains alive in the imagination of some, but not all, contemporary Muslims. Previous caliphates never included all Muslims as subjects. Yet the project of reviving the caliphate became important among some Muslims after the Ottoman caliphate was abolished in 1924. The only Islamist political movement that openly prioritizes the restoration of the caliphate project is Hizb al-Tahrir. Under Osama bin Laden, al-Qaeda occasionally invoked the caliphate as a mobilizing idea, but it was never central to its ideology. The Muslim Brotherhood paid lip service to restoring the caliphate while remaining mainly concerned with national projects, despite its claim of being a transnational movement.

The latest Saudi director of Imam Muhammad Ibn Saud University, a stronghold of Wahhabi theology and jurisprudence, attacked all those who think that Turkish Prime Minister Recep Tayyip Erdogan will restore the caliphate. Suleiman Aba al-Khayil reiterated a typical Wahhabi attack on Erdogan and his Turkish state, invoking blasphemy, debauchery and, amusingly, Turkish nudist clubs as reasons disqualifying the prime minister from the post of sultan or caliph. He asked how a Saudi brought up on the "pure" creed of the country dared to expect Erdogan to restore the caliphate when his state was immersed in sin and was the archenemy of the creed of Saudi Arabia.

There is nothing new in al-Khayil’s attack on the Turkish leadership. Since the mid-18th century, Saudi Wahhabi clerics have excelled in denouncing Turkish Islam as innovation amounting to blasphemy and fought the Ottoman empire. They were willing to ally themselves during the First World War with the British, obviously an infidel power in their classification, to expel the Ottomans from Arabia. Their main differences with the Ottomans were not only religious, but also grounded in local, pre-modern nationalism. Wahhabis aspired to control the Hijaz, where the holy cities of Mecca and Medina are. The Ottoman caliphate had nominal suzerainty over the region and indirectly ruled through the Sherifs of Mecca. Wahhabis wanted to control this city not only to shape Islam for all Muslims, but also to increase their revenues from the pilgrimage season.

This history of animosity has not faded with the vanishing Ottoman caliphate. It remains alive in the Wahhabi imagination but is rooted in a new political context. The university director considers Turkey’s support for the outlawed Muslim Brotherhood a direct threat not only to Saudi Salafist hegemony, but also to the status of the Saudi state in the Muslim world. Perhaps al-Khayil sensed the danger in an alternative politics endorsed by Erdogan that may be attractive to contemporary Saudis seeking a way out of the Saudi version of Salafist thought and practices. He denounces the secret Muslim Brotherhood cells that allegedly corrupt the creed of Muslims and contaminate their tradition, and perhaps encourage them to rise against unelected rulers like Al-Saud.

Al-Khayil warns against this political outcome under the guise of protecting creed and Islam. His discourse invokes moral purity as part of the Saudi Islamic utopia where vice is allegedly eradicated under the guidance of his graduates and the law-enforcing agencies of the state. For him, Turkey is not a Muslim state simply because it does not apply Sharia and allows immoral behavior to flourish. His obsession with nudity is a typical Wahhabi reaction that sees other Muslims as morally inferior and religiously corrupt. The kingdom the clerics forged promised them special status as guardians of the moral realm, placed them in key educational and judiciary institutions and endowed them with the responsibility of producing tamed citizens who are equally obsessed with their religious purity.

This obsession became a true neurosis that has gripped many Saudis and resulted in two contradictory outcomes. While the majority tries to escape the trappings of the obsession, the less fortunate are either totally absorbed by it or totally detached from it. Those absorbed by the obsession imagine a world full of evil forces that corrupt their faith, Westernize their children and conspire to lead them astray. Their daily life is a continuous moral crusade, a struggle to ward off evil temptations and moral degeneration.

Those detached Saudis await an escape from the rigid moral order in which they are forced to live. They lead a double life in which an outward piety coexists with a secret life of their own choosing. Their multiple lives can only be lived in multiple places. A trip abroad becomes an opportunity to live that other, hidden lifestyle. The wealthy can create a high wall around themselves behind which the nudist clubs mentioned in the director’s lecture can be enjoyed in full. As long as the veneer of piety and propriety is upheld in public, the illusion of the utopia survives. Fortunately, many Saudis are aware of the danger of an illusion that has been exposed as a result of the information revolution and its many channels. The cracks in the utopia are too big to mend. But by nature, utopian visions are resilient and may take a long time to be replaced by a realistic one that is more faithful to people’s strengths and weaknesses. When utopias are clothed in religious garb, they tend to be more resilient still, but they are bound eventually to disintegrate.

The Saudi politico-religious model is gradually losing its allure among its own constituency. Its shortcomings are increasingly exposed under the pressure of universal values concerning dignity, accountability, human rights and good governance. Without oil resources, this model would not have survived many crises and, more than at any previous time, it is showing cracks at the level of both ideology and practice. The religious side of the model is seen as completely detached from people’s rights and aspirations. It has become a branch of government corresponding to an Orwellian Ministry of Truth, in which lies about purity and propriety collide with the reality of people drifting into alternative lifestyles. Its political branch is equally unconcerned with living up to the promise of welfare, employment and distribution of wealth. It remains preoccupied with its own survival in a volatile region where the power of ideology, both religious and non-religious, is no longer capable of captivating people’s imagination. While the Arab Spring has not yet reached its full potential, it has truly succeeded in dismantling a whole range of ideologies.

The Saudi university director may rest assured that neither Erdogan nor his own rulers are destined to restore the caliphate, at least in the near future. He will be shocked if he comes across statistics about Saudi tourists visiting Turkey this summer, not all of whom will be fantasizing about the nudist clubs that allegedly flourish under Erdogan’s government.