Did nostalgia for Islamic caliphate become a reality?

The Islamic State has exploited ideological tendencies of Salafist jihadists to establish its "Islamic caliphate." 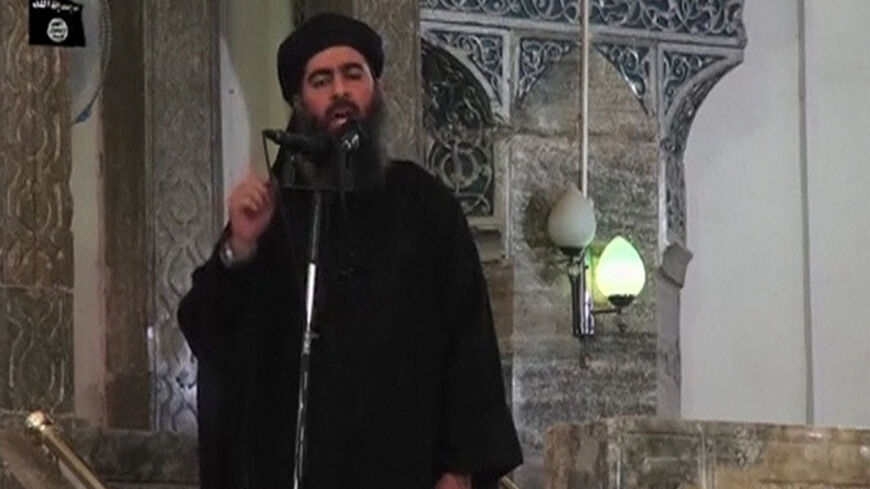 A still from a video shows Abu Bakr al-Baghdadi, the man purported to be the reclusive leader of the militant Islamic State, at a mosque in Mosul, July 5, 2014. - REUTERS

On June 29, Abu Muhammad al-Adnani al-Shami, the official spokesman for the Islamic State (IS, formerly known as the Islamic State of Iraq and al-Sham, or ISIS), announced the establishment of the “Islamic caliphate” in the lands the organization controls in Syria and Iraq. On July 4, Abu Bakr al-Baghdadi made his first public appearance at the Great Mosque in the city of Mosul, and led Friday prayers under the name of Caliph Ibrahim, emir of the faithful in the Islamic state.

In his sermon Friday, Baghdadi called on all Muslims in the far-reaching points of the world to join the recently formed IS, to support it in extending its authority over all Muslim territory. Previously, his group had announced a map for an Islamic caliphate, to include large areas from India to southern Europe, and expressed its plan to seize this region within five years.

Various parts in the Muslim world have witnessed demonstrations in support of the establishment of the Islamic caliphate, from Jordan — which neighbors the area — to Indonesia and the Philippines in the far east of the Muslim world. Protesters pledged allegiance to the caliph and expressed their willingness to immediately support him when demanded. Moreover, large groups affiliated with Jabhat al-Nusra, which competes with the IS, declared their allegiance to the caliphate after the establishment of the IS was announced. This was coupled with Syrian and Iraqi tribes that rushed to pledge allegiance to the Islamic caliphate in IS-controlled areas.

In another context, the head of the International Union of Muslim Scholars, Yusuf al-Qaradawi, denounced the IS' announcement of the caliphate in a statement issued on July 4. However, he stressed that restoring the caliphate is an original Islamic principle that “we are all eager to [achieve] and we all think about with all of our minds, and our hearts beat with passion for it. We all dream of an Islamic caliphate upon the prophetic example, and we wish for it to be established sooner rather than later from the bottom of our hearts.” It is worth mentioning that Qaradawi is a spiritual leader and theoretician of the Muslim Brotherhood, which shares the basic fundamentalist principles with jihadist Salafist groups, although they have different doctrines.

Other Salafist thinkers affiliated with the jihadist movement have tried to interpret the recent IS achievements from the perspective of eschatology, a form of theology dealing with ultimate destiny of mankind. They considered what is happening as part of the coming of the Mahdi, who, according to Islamic tradition, will restore the Islamic caliphate after turmoil in specific parts of the Islamic world, including Iraq and Syria.

All of this shows that a strong nostalgia for the Islamic caliphate is spread throughout the Muslim world. The caliphate is coupled with the collective imagination of Islamic civilization's once-flourishing and historical greatness. This feeling is greatly fed by the absence of any political stability and the major economic problems in Muslim communities; frustration and despair about change can lead individuals toward utopian thinking, and keep them away from realistic thinking about their problems. This is particularly true because these communities have gone through many trying experiences in the last century, to no avail. They have been through a period of colonization after they dreamed of being freed from the tyranny of the Ottoman Empire. They were inflicted with military regimes after they opposed and got rid of colonialism. They fell into the trap of multiple nationalist and leftist ideologies that did not provide them with the decent life of an advanced society they aspire to.

The attractiveness of utopia is seen as an important factor in spreading tendencies toward the establishment of an Islamic caliphate. Theoreticians have presented the Salafist utopia as a realistic, viable plan, as well as a necessity God promised his faithful people. The details of this divine plan are outlined in the writing of two pillars of the contemporary Salafist ideology, namely Abul A'la Maududi and Sayyid Qutb.

This Salafist vision is divided into two parts in history, namely the Jahiliyyah (ignorance) period and Islam. According to this vision, each ignorance stage is followed by an Islamic stage. Since the world is presently witnessing an era of modern “ignorance,” jihad must be conducted to lay the foundations for the future Islamic era. This is done through three stages. First is faith (pure Salafist Islam), second is the migration, hijra (moving from the infidel communities to faithful communities) and third is jihad (to achieve an Islamic state that should appear in the form of a caliphate, as a common way for the Salafists).

The IS' extensive propaganda has played a prominent role in professionally marketing this idea, to attract larger numbers of fighters to the global jihadist project to establish an Islamic caliphate. The IS media team constantly posts videos showing fighters coming from different parts of the world, be they Muslim-majority countries or not. The arrivals speak about their faith and jihadist experience that brought them to the battlefield. Then, they burn their passports, and warn their governments that they will return with their weapons for the Islamic caliphate to exert its control there. The focus is often placed on fighters coming from Western countries, to encourage and entice citizens of Muslim countries to join the jihad. They also conduct military parades in IS-controlled cities to show their strength, and prove that their project of establishing the caliphate is real.

The IS has exploited its recent achievements of controlling vast parts of Iraq near the seized areas in Syria, to announce the dissolving of the border established between the two countries as a result of the 1916 Sykes-Picot Agreement. The IS is using these gains to stress that it has already achieved the caliphate project, which was brought down by the West one century ago by the partition of the Ottoman territories under the aforementioned agreement.

Finally, despite the fact that the IS is still far from the possibility of having the stability of a real nation, in the absence of the complete fundamentals for the establishment of a modern state, it still will be able to survive for a long time, and to cause chaos in vast parts of and around the Middle East. This is in the absence of a regional and international consensus on the eradication of this terrorist group.