As the talks on a comprehensive nuclear agreement with Iran commence this week in Vienna, there is also an opening to engage Iran on Syria and terrorism. 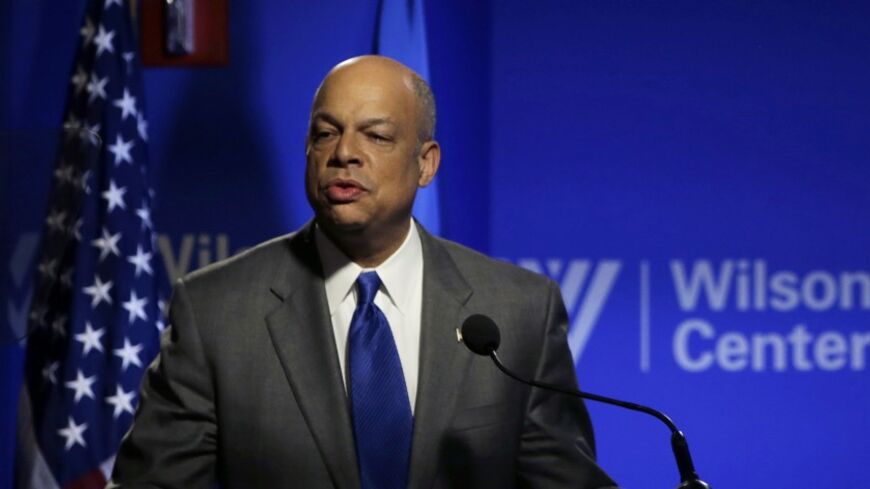 US Department of Homeland Security Secretary Jeh Johnson said in a speech in Washington on Feb. 7, 2014, that “Syria has become a matter of homeland security.” - REUTERS/Gary Cameron

US President Barack Obama, frustrated with the stalled Geneva talks, has called for new policy options to deal with Syria.

As with the talks on a comprehensive agreement on Iran’s nuclear program, which begin this week in Vienna, the United States should put Iran to the test on terrorism, which is directly related to the Syria war.

The alarming proliferation of al-Qaeda and affiliated groups that are fighting the government of Syrian President Bashar al-Assad, and that are sworn enemies of the United States, has made Syria a vital US national security interest.

US Secretary of Homeland Security Jeh Johnson said on Feb. 7, “Syria has become a matter of homeland security.” Four days later, US Director of National Intelligence James Clapper boosted his earlier estimate of foreign fighters in Syria to 7,500 in testimony before the Senate Armed Services Committee. Among those fighters are al-Qaeda veterans who, according to Clapper, “have aspirations for external attack in Europe, if not the homeland itself.”

While Washington and Tehran may want to keep at least the public focus solely on the nuclear talks, and not on Syria, the two issues are already connected.

Iran wants sanctions relief. However, according to US laws, including the Iran Sanctions Act, Iran will not be free from the shadow of US sanctions — including those that threaten international companies seeking to invest in Iran’s energy sector — until Iran is no longer designated as a state sponsor of terrorism, which is mostly related to Iran’s support of Hezbollah.

A renewed focus on the terrorist threat in Syria, including engagement with Iran, could also lead to smoother negotiations for a political transition and humanitarian relief in Syria and the opportunity to start to build a lasting, regionally based mechanism to deal with the growing threat from al-Qaeda and related groups.

This is not so far-fetched. Iran has signaled a willingness to address the threat from terrorism in Syria, as this also threatens Iran. Alireza Miryousefi, counselor and head of the press office at Iran's mission to the United Nations, writes this week for Al-Monitor, “We firmly believe that to attain peace in Syria the first step is the immediate freeze in the flow of arms and extremist groups to Syria, and simultaneous pressure on the armed groups inside Syria to pursue a political solution.”

A discussion with Iran about Syria is a prelude to a broader discussion about Hezbollah, which is at the crux of the US tagging Iran as a state sponsor of terrorism. It is Hezbollah’s forces who have helped Assad tilt the balance strongly in his favor. But Iran is not going to concede anything on Hezbollah or Assad just because the United States demands Iran do so. And the United States may not be best placed at this time to broker such a negotiation, even quietly.

Here is where Russia comes into play. Bijan Khajehpour writes that Russia-Iran relations are on the cusp of a “new chapter,” in part because of their shared interests in addressing the jihadi threat in Syria, which should also be a shared interest with the United States. Russia could also play a bridging role, perhaps through very quiet back channels, to calm Israel-Iran ties. A key player here is Israeli Foreign Minister Avigdor Liberman who, as Ben Caspit writes this week, has maintained a strong relationship with US Secretary of State John Kerry, in addition to his long-standing ties to the leadership in Moscow, as Liberman maps his path to become prime minister of Israel.

A calming of the situation in Syria would have direct consequences for Hezbollah’s role in Lebanon. You can’t solve Lebanon, or Hezbollah, without solving Syria. Gen. Michel Aoun, head of Lebanon’s Free Patriotic Movement and a key broker of the deal this week that allowed formation of a new Lebanese government, began discussions of a plan to assimilate Hezbollah’s forces into the Lebanese army. This deal could be picked up again, at the right time, and might facilitate progress on development of energy reserves in the eastern Mediterranean, where cooperation is stymied in part because Lebanon and Israel do not have relations.

It may not be politically correct to argue that there is even greater opportunity for collaboration between the United States and Russia, let alone Iran, in the Middle East. The Obama administration and members of Congress — including Virginia Democratic Sen. Tim Kaine, a member of the Foreign Relations Committee interviewed this week by Laura Rozen — have singled out Russia for not playing a helpful role on Syria.

While Russia has resisted a US-backed UN Security Council resolution to pressure the Assad government to allow greater humanitarian relief in besieged areas, Moscow has been engaged with the Syrian government to encourage efforts to secure the evacuation of 1,400 civilians from the besieged center of Homs — a modest but hard-fought accomplishment. Tehran has also supported humanitarian relief, as Miryousefi writes.

The US reset on Syria would also benefit from a new, regionally based mechanism to address counterterrorism taken up by those countries most affected by the rise of forces affiliated with al-Qaeda and jihadis, including Turkey, Iraq, Jordan, Syria and Lebanon. Such an effort, which would include regular meetings and intensive cooperation among the security heads of these five countries, could complement both the Geneva talks and international efforts to address the terrorist threat from foreign fighters. Over time, this dialogue could be expanded to bring in Iran and Saudi Arabia as well as other countries affected by the growing terrorist threat from Syrian-based jihadis.

The breakdown in Geneva should not be a return to military options and regime change, and a possible slippery slope to US military intervention. There is more life in the diplomatic option in Syria, including with Russia, Iran and the regional countries on the front lines of Syria-based terrorism. The United States needs to engage — not isolate — Russia and Iran as well as its regional allies, to address the terrorist threat that is now a matter of “homeland security.”