Despite defeat of IS, Syria war risks major power conflict

The United States and Russia should abandon "proxy wars" and back a new UN Security Council resolution for a regional peace conference. 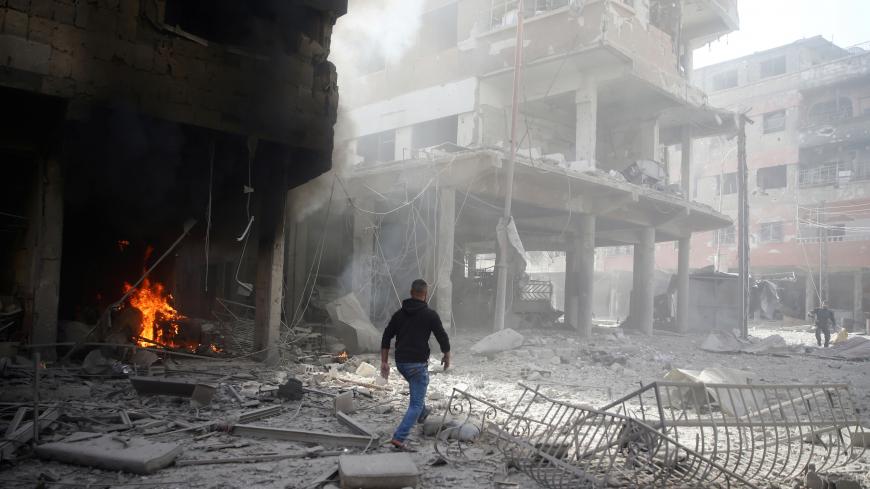 A man walks on rubble at a damaged site after an airstrike in the besieged town of Douma, Eastern Ghouta, Damascus, Syria, Feb. 9, 2018. - REUTERS/Bassam Khabieh

Although the Islamic State (IS) is near defeat, Syria now risks a confrontation among the major regional and world powers. This turn of events can only be characterized as a failure of imagination and leadership, requiring an urgent rethink of the endgame in Syria. Washington and Moscow can either ramp up for a new and uncertain round of violence or begin a UN Security Council-mandated regional peace process to facilitate long overdue post-conflict stability and reconstruction in Syria and Lebanon, in concert with addressing the Israeli-Palestinian question.

A turnaround in Syria requires a change of mindset. The final chapters of the battle against IS should have been a transition of opportunity rather than crisis. But the situation today is nonetheless in crisis. The "proxy war" approach has turned into something more ominous. US, Russian, Turkish, Iranian and Israeli forces are now all active parties to the conflict. The Syrian actors, and their regional backers, have the potential to become the tail wagging the dog, unless the United States and Russia can turn things around.

The early events of 2018 highlight these alarming trends. Last month Turkey defied US calls for restraint, attacked Afrin and threatened an assault on Manbij, targeting the People’s Protection Units (YPG). The Kurdish YPG makes up the core of the Syrian Democratic Forces (SDF), the principal US partner in Syria. On Feb. 7, US-led coalition forces backed up an SDF retaliatory strike against the Syrian military.

Four days earlier, on Feb. 3, a Russian Su-25 was shot down over Idlib and its pilot killed. Russian forces retaliated against armed groups in the area, reportedly killing 30, and Maxim Suchkov says Russian military engagement in Syria, which has been extensive, may only deepen as a result of the incident. “Militarily, the downing of the jet is a pinprick and is unlikely to make Moscow reverse its decision on its troops' presence,” Suchkov writes. “But the Kremlin is now likely to throw even more weight behind Assad (especially since Moscow has been seeking to leverage Assad lately), beef up its military strikes on the terrorists and ‘uncooperative opposition’ alike, and be less flexible politically. At the end of the day, Russia believes it now has yet another reason to think it’s doing the right thing in Syria.”

In potentially the most dangerous development, the Israeli military said it had shot down an Iranian drone over Israeli airspace Feb. 10; this was followed by airstrikes against Iranian and Syrian targets in Syria. After an Israeli combat helicopter downed the drone, an Israeli F-16 involved in subsequent strikes crashed after being fired upon and the plane's pilots parachuted to safety in northern Israel.

All this is hardly to the good in a conflict that has cost the Syrian people, and the people of Lebanon and the region, an unacceptable level of tragedy and loss. A statement by UN High Commissioner for Human Rights Zeid Ra'ad Al Hussein on Feb. 10 said “the conduct and management of this war has been utterly shameful from the outset, and the failure to end it marks an epic failure of global diplomacy.”

The first steps toward a new approach to Syria should begin in Washington and Moscow, because the local and regional parties cannot make peace alone, and may not have an interest in doing so. The US-Russian military deconfliction channel alone is not enough. There needs to be urgent and joint action at the UN Security Council.

There remains an international and regional consensus to prevent a return of IS. That is a good place to start. Three years ago this month, in February 2014, this column called for a “new, regionally based mechanism to address counterterrorism taken up by those countries most affected by the rise of forces affiliated with al-Qaeda and jihadis” that would “complement both the Geneva talks and international efforts to address the terrorist threat from foreign fighters.”

UN Security Council Resolution 2254 (December 2015) calls on member states “to prevent and suppress terrorist acts committed specifically by Islamic State in Iraq and the Levant (ISIL, also known as Da'esh), Al-Nusra Front (ANF), and all other individuals, groups, undertakings, and entities associated with Al Qaeda or ISIL … and to eradicate the safe haven they have established over significant parts of Syria.”

In that same February 2014 column, we suggested that “a renewed focus on the terrorist threat in Syria, including engagement with Iran, could also lead to smoother negotiations for a political transition and humanitarian relief in Syria and the opportunity to start to build a lasting, regionally based mechanism to deal with the growing threat from al-Qaeda and related groups,” adding that “a discussion with Iran about Syria is a prelude to a broader discussion about Hezbollah, which is at the crux of the US tagging Iran as a state sponsor of terrorism. It is Hezbollah’s forces who have helped Assad tilt the balance strongly in his favor. But Iran is not going to concede anything on Hezbollah or Assad just because the United States demands Iran do so.”

And this again points to a role for Russia, which shares an interest in preventing an Israeli-Iranian conflict, and maintains close ties with Syria and Iran, as well as regular consultations with Israel.

There are no illusions here about the difficulties of the questions that need to be addressed and the depth of conflict among the players. This column has been a consistent backer of the United Nations special envoy for Syria to broker a political settlement along the lines of the Geneva accord. But we cannot bury the lead that the Geneva process has been overtaken by the Astana approach, which has also revealed its limitations, as the de-escalation zones have become conflict zones.

In sum, there should be a de-emphasis on the tactics of the local players, and a priority on the urgency of strategic planning by the global powers, including a new UN Security Council resolution. The Security Council needs to be united, not divided, to bring peace to the region, a forum for action rather than a podium for speeches and recriminations. The questions of war and peace in Syria and the Middle East, it seems to us, are more suited to global powers than open-ended commitments to deconfliction lines in the Syrian desert and “standing by” our respective partners, which could lead to an unfortunate escalatory spiral and a win for the terrorists we went to Syria to defeat in the first place.