US, EU say decision on Iran deal depends on Tehran

US and EU officials dismiss claims that an Israeli campaign has influenced negotiations, and say the next move is Iran’s. 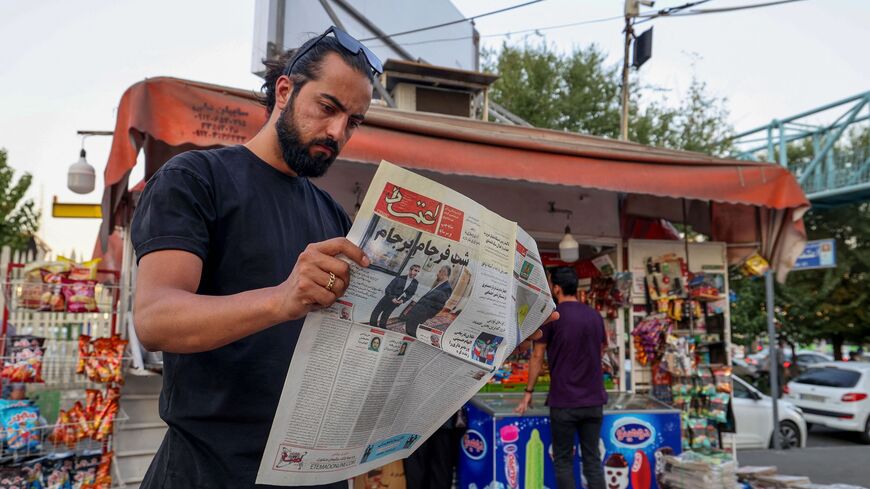 A man reads the Iranian newspaper Etemad, with the front page title reading in Farsi "The night of the end of the JCPOA," and cover photos of Iran's Foreign Minister Hossein Amir-Abdollahian and his deputy and chief nuclear negotiator Ali Bagheri Kani, in Tehran on Aug. 16, 2022. - ATTA KENARE/AFP via Getty Images

There is complete radio silence between Tehran and Washington, with no messages moving via mediators. There appears to be a sort of “negotiations fatigue” among all the parties. Iran says the ball is in the United States’ court, and the United States says the opposite.

Pessimism has prevailed as European officials express skepticism over the possibility of reaching a deal anytime soon. On Monday, Secretary of State Antony Blinken said it was “unlikely” an agreement to restore the Joint Comprehensive Plan of Action (JCPOA) would be reached in the near term.

Israel is taking the credit for the dire state of the game after handing German Chancellor Olaf Scholz “sensitive and relevant intelligence information” on Iran’s nuclear program “that proved that the Iranians are lying while talks are still happening.”

A senior Israeli official told the Times of Israel that US Special Envoy on Iran Robert Malley was pushed to the side and that the Vienna talks “are no longer in Malley’s hands.”

“Absurd” is the word a senior US official used to describe these reports to Al-Monitor. The official, who requested not to be identified, also made it clear that the United States did not toughen its position at all, nor was it influenced by an outside party.

“We have had a consistent stance for a long time,” the official said. “The only reason we couldn’t conclude a deal over the last weeks is because Iran reintroduced extraneous issues.”

A European official who spoke to Al-Monitor on condition of anonymity also dismissed the Israelis played a role in sinking the talks.

“Whatever the Israelis may be saying in order to take credit, those who carry the responsibility for the situation we are in right now are the Iranians.”

The European official insisted “there has been no hardening of European or US positions. There was a final move by Tehran whose only possible outcome was the current impasse.”

Israel’s officials have been active during the past few weeks in their attempts to prevent a revival of the nuclear deal. Israeli Prime Minister Yair Lapid told the Israeli Cabinet on Sunday that “Israel is conducting a successful diplomatic drive to halt the nuclear deal and prevent the lifting of sanctions on Iran." "It's not over yet. The road is long. But there are encouraging signs."

Israel’s security agencies now estimate a deal won’t be struck before the November midterm elections in the United States. Even then, the agreement “will not give Iran immunity from Mossad operations,” Israeli spy chief David Barnea warned in a Sept. 12 speech.

With only two years left in President Joe Biden’s term, and without guarantees that a future administration would abide by the deal, Iran wants the deal’s language tightened up and less complicated. They haven’t forgotten their 2015 experience where there was a dispute over the different “fact sheets” released by the deal’s signatories.

A senior EU official commented on the pessimism expressed, saying, “The deal is not dead but it is obvious we need more time.”

Memories of the original deal and the decision by former President Donald Trump to exit the deal inflicted a political trauma that can’t be ignored, an Iranian senior official explained to Al-Monitor on condition of anonymity.

The official stressed that “the blame game is not helpful in reaching an agreement. Iran has been patient for years and has shown good will despite the bad experience in the nuclear deal specifically with the Westerners. Iran cannot be held responsible for the Westerners' lack of decision and credibility alike.”

The Iranian official added that his was the country that preserved the nuclear agreement after the United States left.

“Despite the great price, extreme pressure, and European inability and minimum cooperation, Iran insisted on staying in it because the decision to engage in the talks from the beginning was a result of strategic thinking and not a tactical step, because it serves Iranian interests,” the official said.

The official criticized the International Atomic Energy Agency (IAEA), claiming it has taken sides at a time when it must balance its relationship with all parties.

“The clarification process that we are trying to conduct with Iran has not borne fruit so far; we are still expecting this to happen,” he said.

Grossi’s comments come days after the IAEA in its latest report on Iran said it’s "not in a position to provide assurance that Iran's nuclear program is exclusively peaceful.”

The IAEA has been demanding Iran provide the agency with credible explanations regarding man-made uranium particles found at three of its undeclared sites. The report indicates that “the safeguards issues related to these three locations remained outstanding.”

Iran insists the probe be closed, stressing that the UN atomic agency must not be influenced by political pressure.

The Iranian Atomic Energy Organization’s spokesman, Behrouz Kamalvandi, said that Tehran has already cooperated with the agency on monitoring of the mentioned sites. Kamalvandi rejected Grossi's recent statement, urging the IAEA not to judge based on what he described as “fabricated documents provided by the Zionist regime with specific political goals.”

As the stalemate persists, it’s unclear whether either side will take a step backward that would allow for a compromise. The Iranian official told Al-Monitor, “Iran is ready for all options. If the other side succeeds in the agreement, the arrangements can be finalized within a few days, or even less.”