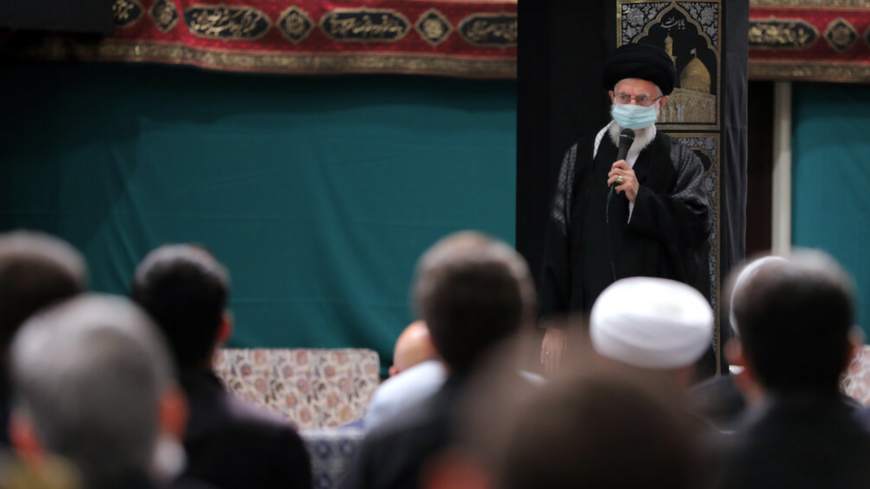 After speculation had grown in recent weeks over the health condition of Iran’s Supreme Leader Ayatollah Khamenei due to his absence from public, he finally appeared at a religious ceremony marking the occasion of Arbaeen, an observance that occurs 40 days after the day marking the martyrdom of the third Shiite Imam, Hussein Ibn Ali.

Khamenei saluted the attendees and then spoke to them standing up, while Iranian President Ebrahim Raisi sat behind to him to his left. His appearance at the Arbaeen ceremony had been announced by his office earlier this week.

In his short speech, the supreme leader said he was delighted that Islamism is on rise and that God is working toward the progress of Islamism in the world day after day.

He also praised the Arbaeen march held in Iraq — where millions of Shiite pilgrims walked toward the site where Imam Hussein was killed — considering it a nuisance for the "enemies."

At the end of his address, Khamenei apologized to those who were unable to attend the meeting due to the pandemic and illness, thanking those who had sent him well wishes.

His reference to illness and people sending him well wishes seems to confirm indications about his poor health condition in recent weeks.

His absence from the public eye for a period of nearly two months raised questions about his health, especially since he missed a significant meeting Sept. 6 with the Assembly of Experts for the first time. The assembly, which is charged with selecting his successor when he dies, holds regular sessions biannually and traditionally the members meet the supreme leader after these. This time however they did not have the meeting with Khamenei.

Hashem Hashemzadeh Harissi, a prominent member of the Assembly of Experts, told local media that they had foregone the meeting because it would "be a heavy burden" on the supreme leader.

His voice appeared weak in his address today at the Arbaeen ceremony, further supporting reports that he has been dealing with health issues recently.

Khamenei suffers from prostate issues, reportedly prostate cancer, and underwent an operation in 2014. He also reportedly had another operation for removing his gallbladder.

The reports about Khamenei's poor health raised questions about his successor and the possibility of protests erupting in Iran.

According to the Iranian constitution, the Assembly of Experts should elect a new supreme leader after death or incapacity of the previous leader. The supreme leader should be a high ranking Shiite cleric (Ayatollah) with good political vision.

During the selection of the supreme leader, a committee consisting of the president, the head of the judiciary and one of the clerical members of the Guardian Council should temporarily undertake the supreme leader's works.

A few names have been raised as prospective successors for Khamenei, most notably current President Ebrahim Raisi and Khamenei's older son, Sayyed Mujtaba.