Who will be Iran's next supreme leader?

Statements by a member of the Assembly of Experts, the body that chooses the supreme leader, have raised the question of who would be qualified to take over for Ayatollah Khamenei. 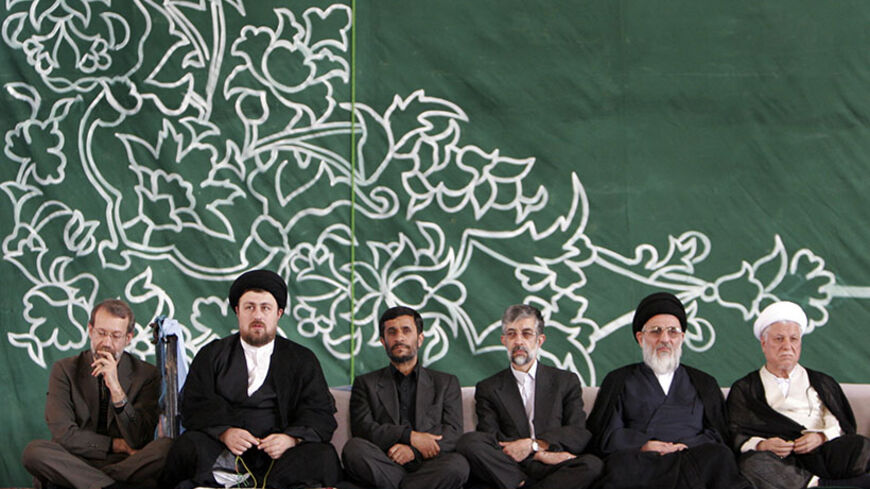 “May God preserve the supreme leader and give him a long life,” said Hojat al-Islam Ghorbanali Dorri-Najafabadi. “However, we need to prepare for when he is gone.”

These comments, which were picked up by Shia Online, went largely unnoticed when they were made May 20. However, this is one of the most candid comments made by a member of the Assembly of Experts about their constitutional role of both choosing the next supreme leader and supervising him after Ayatollah Ali Khamenei's reign ends. The topic came up while he was talking to reporters about the importance of the next Assembly of Experts election in February 2016.

By physical appearances, the 75-year-old Ayatollah Khamenei appears healthy. Iranian TV often shows him hiking in the mountains. He is capable of delivering long sermons and does not appear to be suffering from any mental fatigue or age-related illness. But the issue of succession is still very important for political groups in Iran.

Once the Assembly of Experts hold their election, the winners will hold the position for eight years. When that term comes to an end, the supreme leader will be 83 years old. Therefore, the possibility exists that the next elected Assembly of Experts might have to choose, or at the very least plan, a successor for Ayatollah Khamenei.

No one has appointed a deputy supreme leader since, and for good reason. It appears that the practice of choosing a successor while the supreme leader is alive has not been a positive experience, with some describing it as too much like “having two kings in one kingdom.”

The quest for succession will be difficult and many groups with conflicting interests will attempt to sway the elections of the Assembly of Experts in their favor, especially the chairmanship. The official chairman of the Assembly of Experts, Mohammad Reza Mahdavi Kani, recently suffered a heart attack and is in critical condition with no hope of returning to the political arena.

Some have speculated that Ayatollah Hashemi Rafsanjani wants to retake the chairmanship. He was replaced by Mahdavi Kani in 2011 in what was viewed as a demotion for his support of the Reformists after the contested 2009 elections. Ayatollah Mahmoud Shahroudi, a prominent cleric with close ties to Ayatollah Khamenei, has been appointed acting chairman and will remain in the position until the fate of Mahdavi Kani becomes clear, or perhaps the elections.

Despite the importance of the position, there is doubt about how much weight it actually carries anymore.

Mohammad Noorizad, one of the most outspoken political dissidents in Iran, said of the election of the future supreme leader, “Neither the Assembly of Experts nor the parliament is independent. The supreme leader, the security organizations and the Islamic Revolutionary Guard Corps all interfere in the decisions of the assembly. There is no hope that the Assembly of Experts can choose the future supreme leader without the interference of the Guard and the intelligence organizations.”

Noorizad believes that the Revolutionary Guard will attempt to put forward a candidate who has general popularity in society but who is also loyal to the corps and its financial and foreign policy interests.

A cleric in Qom who spoke to Al-Monitor on condition of anonymity said that Ayatollah Shahroudi is someone the security organizations in Iran would accept as supreme leader. Shahroudi, who served as the chief justice of Iran for 10 years, is an influential Shiite marja. He was born in Iraq and is an Iraqi citizen. Shahroudi once led the Supreme Council of the Islamic Revolution of Iraq and was also a member of the Dawa Party in Iraq.

The Qom cleric believes that after the supreme leader’s death, politicians close to Rafsanjani, who is currently the chairman of the Expediency Discernment Council, will push for electing Hassan Khomeini, the grandson of Ayatollah Khomeini, as the next supreme leader of Iran. He said, “The seminary in Qom has accepted the religious authority of Hassan Khomeini. He has shown flexibility toward the Revolutionary Guard and therefore it is possible that members of the Revolutionary Guard and the Assembly of Experts would view his candidacy in a positive manner.”

Hassan Khomeini, a middle-aged cleric, is more popular than the older, more traditional clerics. He is a soccer fan and has stated in a TV program that he follows the European soccer league. He is a relative of Mohammad Khatami, the popular former Reformist president of Iran, and after the start of the Green Movement, maintained his relationship with its leaders, Mir-Hossein Mousavi and Mehdi Karroubi.

But his closeness with Reformists, which makes him popular among some in society, will pose a problem for the Revolutionary Guard, which views Reformists with suspicion. Noorizad believes that the promotion of Khomeini is not possible because he has not been able to stand on his own on issues that matter. “The political system has not facilitated the growth of independent individuals,” he said. “Throughout the years, Hassan Khomeini has been unable to protest against the hardships inflicted on people and thus has not been able to gain people’s trust.”

There is of course the possibility that a replacement may not be appointed immediately. Analyst Mohammad Javad Akbarein told Al-Monitor in an interview that it will be difficult for any individual to be picked to become the next supreme leader. “I predict that members of a council will take over the duties of the supreme leader” until the factions settle their differences, he said.

According to the constitution, the supreme leader should be a high-ranking jurist who can also manage political affairs. A very limited number of grand ayatollahs with the status of marja can manage the political affairs of the country. Others have tried to use the model of Ayatollah Khamenei’s own promotion to discern how the next one will be chosen, but many believe that his selection took place in a unique era in Iran, with the ending of a devastating eight-year war with Iraq and the passing of the Islamic Republic’s founder. That time, they say, is not comparable to the relatively stable conditions which Iran finds itself in today.

On concerns that the next supreme leader could be one of the more hard-line figures, Akbarein believes that when necessary, the Principlist members of the Assembly of Experts will support a supreme leader who is close Rafsanjani or other moderates. “Members of this faction believe that the actions of the radical Principlists, such as [Ayatollah Mohammad Taghi] Mesbah Yazdi, are not beneficial for the country and might result in the destruction of the religious government in Iran,” he said.