The death of Ayatollah Mohammad Reza Mahdavi Kani has left open a powerful position with the authority to elect and supervise the supreme leader of Iran. 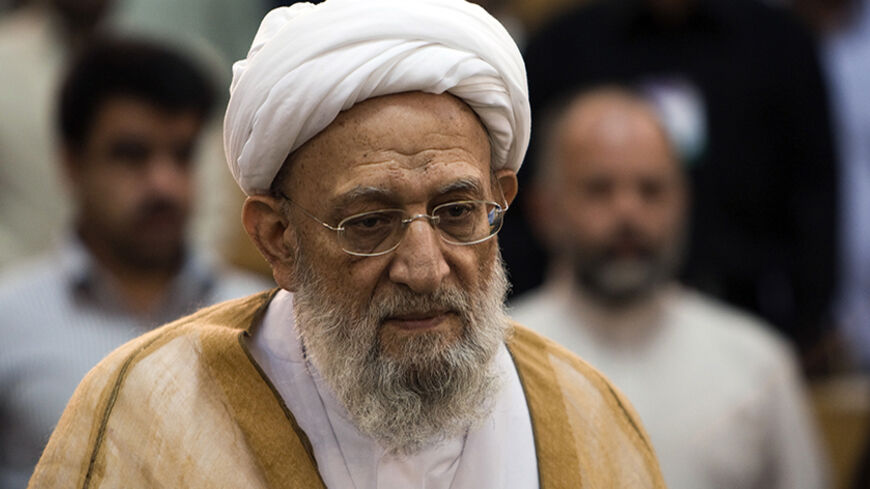 Ayatollah Mohammad Reza Mahdavi Kani, the former chairman of the Assembly of Experts, fell into a coma June 4 after suffering a stroke. Despite his family members asserting that he was recovering, the 83-year-old clergyman — who had long suffered from heart disease — died Oct. 20 and ended speculation that a power struggle over his successor and an internal fight over his wealth inheritance would keep him alive for several months.

Mahdavi Kani’s death, which will be followed by two days of mourning as prompted by President Hassan Rouhani’s administration, obviously will not change the path of the Islamic Republic. But the Islamic system has lost one of its key pragmatic clerical advisers, and most importantly, someone who chaired an assembly that is tasked, at least in theory, with choosing and supervising the supreme leader of Iran.

He was also one of the diminishing number of clerics in Iran's upper echelons of power who had played a significant role in shaping the Islamic Republic.

There was no more critical era than the early 1980s in the history of the Islamic Republic. So much happened: the resignation of the first administration headed by Prime Minister Mehdi Bazargan, the exodus of the Mujaheddin-e Khalq (MEK) after waves of chaos and terror, the establishment of the first militia known as the Kommiteh (the Islamic Revolutionary Committees), a constitutional change to the power structure of the regime and the US Embassy seizure. Mahdavi Kani played an influential, often pivotal, role in all of these events.

Mahdavi Kani was one of the outspoken Iranian clerics who insisted the clerics hold power after the revolution. In his memoirs, he said that he confronted Bazargan when he asked clerics to return to the mosques and leave politics to politicians. “I told Bazargan that we are out of the mosques and will never isolate ourselves within their walls from now on!” Mahdavi Kani told the Assembly of Experts in 2008.

Mahdavi Kani partnered with Hashemi Rafsanjani, who had also been jailed before the revolution for anti-shah activities, to oust Bazargan from power. Both Rafsanjani and Mahdavi Kani believed that clerics should run the country and both opposed the MEK, which was pushed to the fringes and eventually expelled.

After the MEK retaliated by assassinating key figures and high-ranking theocrats, Mahdavi Kani, who founded the first Kommiteh, sought to counteract the group. However, according to Rafsanjani’s memoirs, “Mahdavi Kani did not like our tough approach and asked for a milder approach toward dissidents and MEK detainees. He was against the mass execution [of MEK members]. He expressed it loudly, but the majority did not agree with him.”

Mahdavi Kani, who came from a feudal family in Kan, a village near Tehran, had a broader and more open vision than many of his comrades. He was among the first clerics to call the US Embassy seizure a big mistake. He also insisted that the confiscation of the embassy and holding of the diplomats as hostages was a violation of international law and not in line with the revolution’s goals.

“I was shocked by the incident,” he wrote in his memoirs. “I picked up the phone and called [Supreme Leader Ayatollah Ruhollah Khomeini's son] Ahmad Khomeini immediately. He did not confirm or deny the news about the embassy seizure and kept laughing. I was mad at him and knew that such a thing is not in our favor.”

This objection took its toll years later. In a rare speech in 1988, Ayatollah Khomeini called Mahdavi Kani a front for “American Islam” because of their discord over prolonging the Iran-Iraq war and other issues.

Mahdavi Kani was also the founder of the Rohaniyat Mobarez (Combatant Clerics) party, which sought to train modern Muslim bureaucrats. In 1982, he established Imam Sadegh University with the idea of sending clerics through Western higher education and bridging the gap between Shiite seminaries and traditional academia. Imam Sadegh University took over a beautiful campus in north Tehran that once belonged to a branch of the Harvard Business School. Its strong curriculum plus its Islamic training made the school one of the most popular in the country over a short period of time.

The liberal attitudes of Mahdavi Kani allowed the school's board to employ many well-known dissident scholars such as Ali Akbar and Ali Nouri, who had been expelled from other universities for their Westernized mindsets. This trend not only brought Mahdavi Kani great success in promoting the school’s quality, but let him build a conglomerate empire of multiple holdings under the cover of collecting funds for education.

The rapid success of the school — which focused on humanities and management — led many well-known figures and families to brag about sending their children or relatives to the university. Its alumni include a spectrum of political tendencies within the Islamic Republic who believe that the institution was designed to train students for government service, especially in the Foreign Service and intelligence. This endowed Mahdavi Kani with a discreet channel to influence many key players within the system.

For example, during the last year of the Iran-Iraq war, Mahdavi Kani opposed moving the school from Tehran to Mashhad and banned students from going to the front. This sent a strong message from influential families to Khomeini, who permitted Mahdavi Kani to form the Combatant Clerics party as an offshoot of another clerical group. Khomeini finally drank from “the chalice of poison” and agreed to UN Security Council resolution of 598 that ended the war with Iraq.

It has long been rumored that Mahdavi Kani, in a phone conversation from London where he was being treated for heart disorders, encouraged Rafsanjani to pick Ayatollah Ali Khamenei as the successor to Khomeini after Khomeini died in 1989. Under Khameini, Mahdavi Kani continued using Imam Sadegh University as a base for his political activities and a place to bring hard-liners and Reformists together under one roof. He had Ahmad Alam Ol Hoda, a hard-line cleric and Friday prayer sermon leader of Mashhad, as a member of the university board and Sadegh Zibakalam, a liberal scholar, as a professor at the same time.

Mahdavi Kani used Imam Sadegh University not only to shape the future of the Islamic Republic by training loyal students as cadres for the regime — including former nuclear negotiator Saeed Jalili and Hesamoddin Ashna, a top adviser to Rouhani — but left a unique practical theocratic political legacy based on the concept of "dissimulation," which puts saving the Islamic state before everything else.

His fashion of putting the regime first kept him close enough to Ayatollah Khamenei and gave the supreme leader enough confidence that Mahdavi Kani could never be considered as a threat to his dominion while he is in power. This could be seen clearly in the supreme leader’s message of condolence: "This great and pious man appeared always and everywhere in the position of a religious scholar and an honest politician and a candid revolutionary, played his role bravely during the years following the 1979 Islamic Revolution and spared no efforts in defending the revolution and the Islamic establishment."

When Mahdavi Kani lapsed into a coma, Ayatollah Mahmoud Shahroudi took over his position at the Assembly of Experts. His successor there will clearly show the balance of power in the current atmosphere of Iran. If Rafsanjani, who held the position from 2007 to 2011, takes the position again, it will indicate that the Principlists have been sidelined. If Shahroudi maintains the position and officially becomes chairman, he would be in line with Khamenei’s goals — a strong choice and less bombastic than someone like Ayatollah Ahmad Khatami.