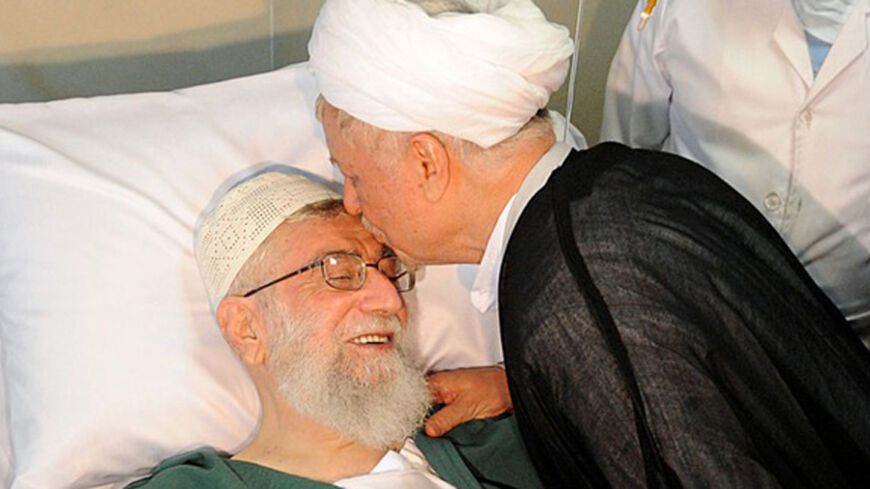 Iran’s Supreme Leader Ayatollah Ali Khamenei underwent prostate surgery Sept. 8 in a government hospital in Tehran. The supreme leader’s website published pictures and video in a sort of live blog, covering the before and after of the operation, to head off speculation about his health and, indirectly, his possible successors.

Before the operation, Ayatollah Khamenei gave an interview in which he said, “Yes, I have an operation and I am on now my way to the hospital. Of course, there is no place for worry. It doesn’t mean that they shouldn’t pray. … It’s a very normal and ordinary operation.” He was standing during the short interview.

Immediately after the surgery, Khamenei’s website published a picture of him lying in the hospital bed with an oxygen mask. The image of the supreme leader without his turban is the first image many Iranians have seen of him in a hospital since the failed 1981 assassination attempt.

The pictures and video of Iranian officials visiting Khamenei in bed made for powerful media imagery. A picture of Ayatollah Hashemi Rafsanjani kissing Khamenei on the forehead went viral. In the video of their meeting, Khamenei thanked Rafsanjani for visiting him, to which Rafsanjani replied, “This is nothing. We came to see our beloved leader. Now I can go home with an easy mind.” Rafsanjani was accompanied by former Supreme Leader Ayatollah Ruhollah Khomeini’s grandchildren.

Former President Mohammad Khatami, who is believed to have had a falling out with the supreme leader over the 2009 elections, has not yet visited.

The most recent video on Khamenei’s website is a report on various reactions to the surgery that declared, “Rumors did not have much of an opportunity for publication. News agencies were reporting from the primary source.”

There are many possible reasons behind the public nature of the surgery. Not going public with the surgery was clearly an option. Going by his doctor’s recovery time, Khamenei could have avoided public appearances for a week and not given speeches for a few more.

Some blogs and websites speculated about the supreme leader having had cancer and about his potential successors. But overwhelmingly, the media coverage focused on the surgery itself, meaning the decision to publicize the surgery was a successful one in the eyes of the supreme leader’s office.