The northern Sinai governorate has opened the beach in Sheikh Zuweid for residents to vacation and picnic for the first time in more than eight years after terrorist operations and the army’s military response to them. 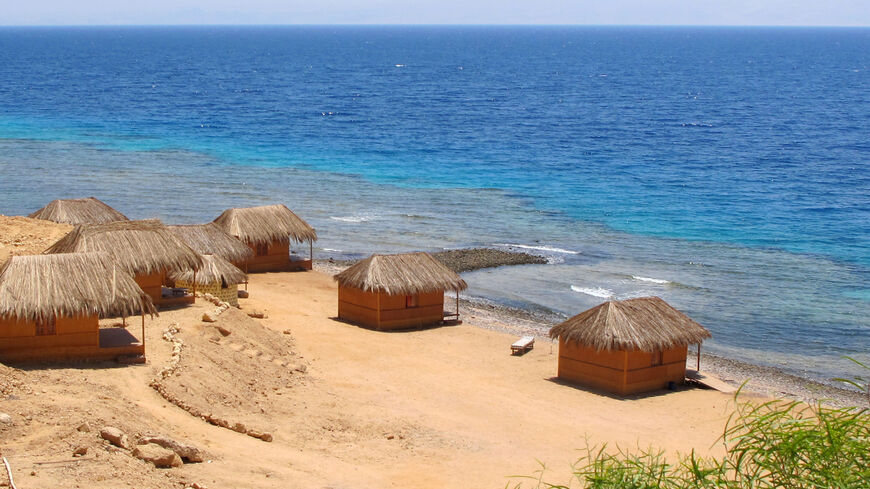 A picture taken on July 11, 2013, shows a deserted beach resort near Nuwaiba on the east coast of Egypt's Sinai Peninsula. Many camps operated by Bedouin tribes are completely deserted as the number of visitors to the Peninsula has sharply declined due to the unrest riddling the country following the fall of Egypt's ousted president, Mohammed Morsi, especially in the most northern parts of the Sinai. - CLEMENS WORTMANN/AFP via Getty Images

CAIRO — For the first time in eight years following the terrorist attacks that rocked that area and the Egyptian army’s military response, the governorate in northern Sinai decided on July 11 to open the beach in the city of Sheikh Zuweid to residents, allowing access for picnics and leisure activities and prompting scores of vacationers to flock to the shore during the Eid al-Adha holiday.

Terrorism has been rampant in northern Sinai since the departure from power of the Muslim Brotherhood on June 30, 2013, after massive demonstrations against former Egyptian President Mohammed Morsi, pushing the army to intervene and remove him from power.

The army had been clashing with armed terrorist groups and closed the beach to ensure the safety of residents. It remained closed until the army took full control of the security situation.

Sheikh Zuweid resident Mustafa Ibrahim, an engineer in the private sector, expressed his joy with this decision, which he described as historic.

“This decision contributed to alleviating the suffering of the people of Sheikh Zuweid and northern Sinai, as they had to travel to Al-Arish beach to take a walk and enjoy summer vacation. But now life has returned to their city after reopening the beach, which is considered one of the most beautiful beaches in northern Sinai and is nicknamed the Maldives of northern Sinai,” he told Al-Monitor.

A security source who preferred not to be named told Al-Monitor that there is coordination at the highest level between the armed forces and the police to impose security control over the northern Sinai Peninsula and Sheikh Zuweid and to pursue and eliminate any remnants of extremist organizations.

The source said the beach was only reopened after full security control of the city and seashore.

Gen. Yahya Kadwani, a member of the Defense and National Security Committee in parliament, seemed to concur with the security source, pointing out that the decision to reopen the beach came after a careful security study of the situation in the region and is a clear indication of the success of security efforts in eliminating extremist terrorist organizations and achieving complete control over northern Sinai.

Kadwani told Al-Monitor, “The decision is the culmination of the sacrifices of the army and the police in maintaining national security and decisively confronting any attempt by any extremist organizations to spread terrorism and instability and attempts to destroy any gains for the country."

“The armed forces continue to track down any terrorist organizations until they are completely eliminated,” he added.

Kadwani said that reopening the beach is a step forward for the reconstruction of Sinai and saving it from the major depopulation it has suffered over the past years.

“This will take place through the expansion of development projects to resettle the population in Sinai, which will have a positive impact on the national economy and preserve national security. This will also be a wall against any attempt on the part of the extremist organization to return,” he added.

Salah Salam, a former member of the National Council for Human Rights for northern Sinai, considers the decision a positive step and an opportunity to alleviate the suffering of the city, which was a flashpoint area serving as a hotbed of terrorist organizations that terrorized citizens with kidnappings and bombings against the armed forces.

Salam told Al-Monitor that the decision to reopen the beach “gives an opportunity to the people of the city not only to take a walk on the beach and enjoy their vacation but also to recover their lands and recultivate them for seasonal crops in a bid to have an extra source of income through agriculture, which is also beneficial to the national economy.”

He believes that the army has retaken the upper hand in Sheikh Zuweid and Al-Arish in northern Sinai after years of violent confrontations with extremist organizations.

“There are still some very limited security operations to track down, and [we must] expel these organizations and eliminate their dangers. There is tight security control over the city,” Salam said.

Salam called on the state to expedite the establishment of modern infrastructure and remove dilapidated structures that are the result of battles the armed forces and police fought against extremist organizations.