Continued violence in Sinai is prompting calls within Egypt for a revision of its treaty with Israel, but state neglect is also to blame. 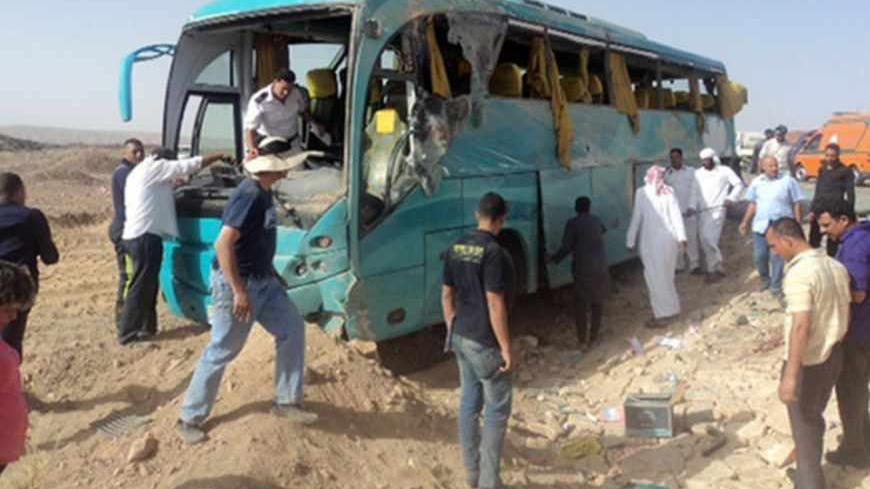 Egyptian security forces and emergency personnel inspect the bus at the site of a road accident in Egypt's Sinai Peninsula on May 31, 2013, which left four Mexican tourists killed. - AFP/Getty Images

CAIRO — The liberation of seven kidnapped Egyptian soldiers on May 22 in northern Sinai raised several questions about the security vacuum along the Egyptian border with Israel and Palestine.

The Egyptian border with Israel is nearly 256 kilometers long (159 miles) — 270 km (168 miles), if its border with Gaza is included. There was a heavy presence of Egyptian troops and aircraft in Sinai before the soldiers were released, despite the Camp David Accords and the Egypt-Israel peace treaty signed in 1979 stipulating that no Egyptian soldiers are allowed within 20 km to 40 km of the Sinai-Israel border, while 750 Egyptian police officers are allowed.

Several Egyptian parties had already been calling for the treaty’s terms to be reviewed, including this August 2012 statement by the Muslim Brotherhood on the “need to reconsider the Camp David Accords.”

The Brotherhood’s deputy leader, Rashad al-Bayoumi, reiterated this call in an interview a fortnight ago with Al-Monitor, stressing that the “Muslim Brotherhood rejects the Camp David Accords” but “cannot cancel it with a stroke of a pen.” Saad Amara, head of the Arab Affairs and National Security Committee in the Brotherhood’s Shura Council, echoed that point of view after the latest security incident in the Sinai, stating that the Camp David Accords are partly responsible for the kidnappings and should therefore be reviewed.

Monday’s deployment of Egyptian troops and tanks in al-Jura, where the operation took place a week ago to comb the area and clear it of jihadists, was an opportunity to examine whether the Brotherhood government benefited from the latest operation toward modifying the treaty’s terms.

Khalil al-Anani, an expert on Islamic movements and a political science professor at the University of Durham in Britain, told Al-Monitor that the Brotherhood government “will not change the Camp David Accords, at least in the foreseeable future, because it means entering into negotiations with Israel, which the Brotherhood does not recognize.” He said what will happen is “an attempt to make changes on the ground by sending troops in times of crises, as happened recently. Israel allowed Egyptian fighter jets to overfly Sinai to hunt down the terrorists.” He said Islamists in general “are not concerned with Camp David right now, except for the Salafist jihadists. The Islamists are busy solidifying their shaky rule.”

Anani’s claim that Israel allowed Egyptian forces in Sinai was confirmed by a source close to the military. Speaking to Al-Monitor, the source said that any Egyptian army presence that was contrary to the treaty’s terms happened only after coordinating with Israel and was overseen by the multinational forces in Area C. Speaking on condition of anonymity, the source said, “The army wishes to modify the treaty’s terms, but like all armies, it does not wish to take any action that leads to war, which the army will have to fight. So the army will not be calling for amending the treaty’s terms as long as the coordination is going well with the Israeli side.”

During a visit to Sinai, Al-Monitor’s correspondent spoke to locals and activists about what they thought of the recurring security incidents.

Yahya al-Ghoul, a judge in Al-Arish, warned against canceling the peace treaty with Israel. While conceding that “the treaty is a danger to Egypt, breaking it now would be a greater danger. So we have to reexamine it after we do an internal reform while staying within the global balance of power.”

Mustafa Sanjar, a Sinai journalist, thinks the treaty is the cause of the absence of state sovereignty in Sinai as well as of the kidnappings and explosions.

“To understand Sinai you have to look at Camp David,” he said to Al-Monitor. In his opinion, the solution lies in “getting all the people involved in pressuring for the treaty’s cancellation. Israel fears the people. It does not fear governments. For example, look at the attempt to storm the Israeli embassy in Cairo.”

Hasan Khalaf, known as the Sheikh of Sinai jihadists — a title he was given because of his participation in the Yom Kippur war and his heroic victory over Israel — said, “We have not seen these forces for 40 years. What is painful is that they entered in coordination with the other side [Israel]. The treaty must be reconsidered.”

Is Sinai instability a result of Camp David or state neglect?

Mustafa al-Atrash, an activist in the Sinai, disputed the role the treaty is having in Sinai’s instability, instead pointing to continued state economic neglect of the area. “The absence of development [in Sinai] by successive governments is also an important reason. Nothing in the agreement prevents development. Poverty and ignorance are a cauldron of extremist thought. Even if we amend or cancel the treaty, we need development,” he told Al-Monitor.

A 2007 study, “The Issue of the Sinai,” conducted by the International Crisis Group, classified North Sinai as one of the poorest governorates in Egypt. It concluded that the focus on security issues has led to a decline in economic development projects, except for tourism projects in southern Sinai.

The presence of the state can only be felt in projects dominated by persons close to the former ruling party. For example, businessman Hassan Rateb, a former member of the dissolved National Democratic Party, has monopolized projects in the north, including Sinai University, the Sama Al-Arish village and the cement factory in central Sinai, which used to supply Israel with building materials for the separation wall in Palestine. Rateb was also able to obtain land and facilities for reduced prices like no other businessman.

The South is monopolized by the fugitive businessman Hussein Salem, who owns a string of tourism projects, such as Movenpick Hotels, as a result of his close relationship with the Mubarak family and the gas export deal with Israel. Today, many people of Sinai say their region is owned by "Hassan and Hussein."

A senior source in the local administration of North Sinai told Al-Monitor, “There are major development obstacles.” He said, “Large amounts of money were granted for the development of Sinai, but not a single pound has been disbursed. There is a $50 million US grant for the two governorates of Sinai, $10 million for fish farms, 200 million euros [$260 million] for the Academy of Scientific Research and Technology (ASRT) and 120 million Egyptian pounds [$17.2 million] previously mentioned by Ahmed Omran, the advisor to President Mohammed Morsi, for community development.”

According to the source, who spoke on condition of anonymity, the non-disbursement of funds and obstruction of requests to implement projects submitted since 1995 clearly reflects a lack of will by successive governments to develop Sinai. Islam Quwaydir, a member of the Coalition of the Youth of the Revolution, agreed. He told Al-Monitor that there is a severe shortage of water in Al-Arish, Sheikh Zowaid and Rafah, and that it is sometimes only available for two hours a day because of the rundown infrastructure.

During a visit to North Sinai, Al-Monitor spoke with youths who expressed skepticism about the statements made by Egypt's minister of investment, Yahya Hamid, that the ministry is set to announce investment opportunities in Sinai by June 28, 2013.

According to official figures, the area of North Sinai is over 27,000 square km (10,425 square miles). According to a 2012 census, it has a population of 409,000 people, who are distributed across six administrative centers, six major cities, 82 villages and 458 localities. However, 90% of the population lives along the coast, over an area comprising less than 20% of the Sinai. Only 10% of the population reside in the large remaining space, which is central Sinai.

While Camp David certainly has its shortcomings in preventing Egypt’s armed forces from exerting full control over the area, the state — now under the rule of the Muslim Brotherhood — cannot absolve itself of responsibility in undermining the region’s stability through its continued neglect.

Abdelrahman Youssef is an Egyptian journalist specializing in religious issues and political affairs. He has written for publications including Al-Shorouk, Al-Youm Al-Sabea, Al-Watan, Egypt Independent and Egypt Daily News, as well as for news organizations outside of Egypt such as the Lebanese Al-Akhbar and Reuters. On Twitter: @Abdoyoussef