The Sinai has exposed the fallacies of the piecemeal approach to the Arab–Israeli conflict. 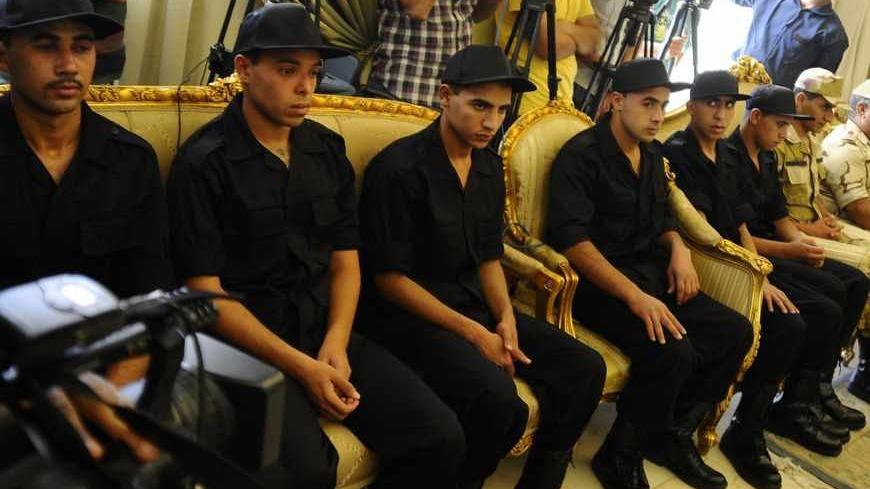 Soldiers who were kidnapped last week sit before a news conference by President Mohammed Morsi after their release, in Cairo, May 22, 2013. - REUTERS

Last week, Prime Minister Ismail Haniyeh of the Hamas government in Gaza called on Egypt to revise the Camp David Accords, which were signed with Israel. His speech came after the kidnapping and later release of Egyptian security personnel in Sinai by radical jihadist groups.

The debate about the peace treaty with Israel is not new. It is as old as the treaty itself. The recent deterioration of security in Sinai, however, particularly after the ouster of the Mubarak regime, has reinvigorated the debate about the Camp David Accords. This is especially the case regarding amendment of the security arrangement in Sinai.

It may look like an easy fix; let’s bring the Egyptian army in to combat terrorism in the increasingly lawless peninsula, but it's not. When Sadat signed the Camp David Accords with Israel, he was a leader of the state of Egypt, forging a deal with the aim of ending the animosity with Israel and kick starting a wider peace process to solve the Arab-Israeli conflict. The military annex was negotiated within that context, preserving the peace between two nations. Thirty-four years later, Haniyeh’s speech reflects the new reality; there is neither a peace nor a two-nation deal. Security in the Sinai has become a dodgy threesome affair.

In 1979, Gaza was never part of the equation and there was no way to envisage that Hamas and other radical groups would ever be part of the situation. In 2013, Sinai is a different story. There is a new post-revolution, Islamist leadership in Cairo; a porous border with Gaza, with complex networks of tunnels (most of there are still intact despite the Egyptian army’s systematic efforts to destroy them over the last few months); and radical groups already settled in Sinai, undermining security to further their own agendas. The recent kidnapping incident has exposed the clashing goals and interests of all the players in Egypt, Gaza and Israel.

In Egypt, all players, including the Muslim Brotherhood, and opposition forces, are preoccupied with abusing the crisis in Sinai for political gains. This is a zero-sum battle of empty clichés and finger pointing. The president and the army chief are locked in a battle for dominance and assertion. The mysterious release of the kidnapped men was a chance for Egyptian President Mohammed Morsi to reinforce an image of a civilian leader ruling the armed forces, and the military leadership also took the opportunity to paint an image of a carefully conducted operation. Nonetheless, Egyptians still do not know who are the kidnappers, or what exactly is happening in Sinai.

In Sinai, tribe leaders have their own grievances. They are demanding amnesty for Sinai residents who were wrongfully sentenced under Mubarak, and are agitating for reintegration into society through decent jobs. Sinai has always been neglected and now it also has jihadist residents. The Arabic statement by Sinai’s radical Salafi group, aside from protesting the innocence of their imprisoned colleagues, offered an outright admission that their main aim is to fight “the Zionist entity,” and accused Israel of prompting the Egyptian military enforcement in Sinai.

In Gaza, Hamas, while denying any involvement in the kidnapping, has failed to prevent other groups from breaking the cease-fire agreement with Israel. Only a few weeks ago, rocket strikes were fired from the Egyptian Sinai into the Israeli city of Eilat. Yet Hamas, as Haniyeh conveyed, blamed Israel for the crisis in Sinai, stating that this is done “to de-stabilize Egypt's security and damage Egypt-Palestine relations."

This theory is unsurprisingly appealing to the already hostile Egyptian public. Many in the Salafi group expressed sympathy for the detained radicals, but also blamed Israeli for the kidnapping and for the general deterioration of security in Sinai. Ironically, no one saw any contradiction between the two claims.

The Israeli leadership, who have expressed concerns in the past about the lawlessness in Sinai, have been careful this time. They took the wise and pragmatic approach of “ignoring” the military annex of the Camp David Accords to allow the Egyptian military to handle the recent kidnapping.

This pragmatism is not new; indirect coordination has been the theme since the end of the Mubarak regime. “Hints and winks” have replaced the formal channels between Cairo and Jerusalem. Nonetheless, the Israelis are not taking any chances and they have built a new 150-mile fence along the border with Egypt. They also did not hesitate to break the cease-fire deal to target and kill an Islamist, who had allegedly taken part in the recent Eilat rocket attack.

Judging by the above, it's clear that all the current stakeholders in Sinai want or “do not mind” an amendment of the military annex of the Camp David peace treaty. Everyone, however, disagrees on why they need the change. The Palestinians are protesting their innocence, blaming the Israelis for the mess and vice versa. Both want Egypt to police Sinai to protect each side from the other. Israel will probably only agree to amend the treaty if it brings a better security arrangement, but amending the treaty without considering the complexity of Gaza will never bring anything better than the status quo.

The situation in Sinai is a political, rather than a military, failure. The unfortunate peninsula is paying the price of not just Egyptian neglect, but also the continuing failure to solve the Arab-Israeli conflict. Additionally, Israel’s unilateral withdrawal from Gaza empowered non-state players and created a security vacuum. If the army acts as a police force, it would trigger, rather than prevent, escalation. To secure the border, as advocates for modifying the treaty suggest, the Egyptian army would be involved in confrontations with either Palestinians trying to infiltrate the border or with the Israeli army stopping Palestinian infiltration through the border. For those with a short memory, recall the incident in 2011 when Israel killed Egyptian soldiers while allegedly chasing Palestinian militants.

Sinai has exposed the fallacies of the piecemeal approach to the Arab–Israeli conflict. The train of peace that was once launched by Sadat and Begin quickly derailed and has led to non-state players and global jihadists who have hijacked the agenda. Renegotiating the Camp David peace deal could easily create a “domino effect” that threatens the vulnerable peace treaty with Jordan and the “already gasping” Oslo agreement with the Palestinian Authority.

Egyptian army tanks and aircrafts are not the solution. Egypt should formulate a comprehensive counter-terrorism strategy, which does not just include tricky mediation between the Palestinian and the Israeli side. Instead Egyptian leaders should openly acknowledge to the Egyptian public that coordinating with Israel is neither a crime, nor a dirty affair. Hamas should also understand that development of a trade zone at the Gaza border and a hostile Egyptian-Israeli relationship are mutually exclusive goals. In addition, all three players should commit to eradicating jihadism from Sinai and coordinate to fulfill that task.

These ideas are difficult to implement. There is no real appetite to handle Sinai’s problem and the stakeholders are too myopic and too selfish to coordinate their actions. This is precisely why it is better to leave the treaty unchanged and continue to work behind the scenes with the undeclared “hints and winks” approach. Meanwhile, Egypt can try from its side to enhance its counter-terrorism ability, rebuild confidence with Sinai’s Bedouin and work with them to fight the radicals.