The growing presence of armed groups in the Sinai threatens to destabilize the area, potentially drawing Israel, Egypt and Hamas into confrontation, Noura Khouri writes. 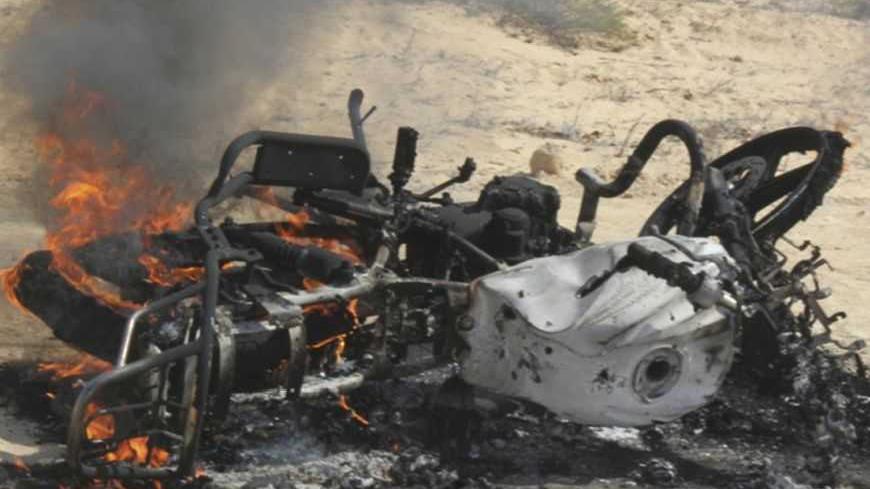 A vehicle burns after a firefight between Egyptian security forces and suspected militants at the al-Goura settlement in Egypt's north Sinai region, about 15 km (10 miles) from the border with Israel, Aug. 12, 2012. - REUTERS 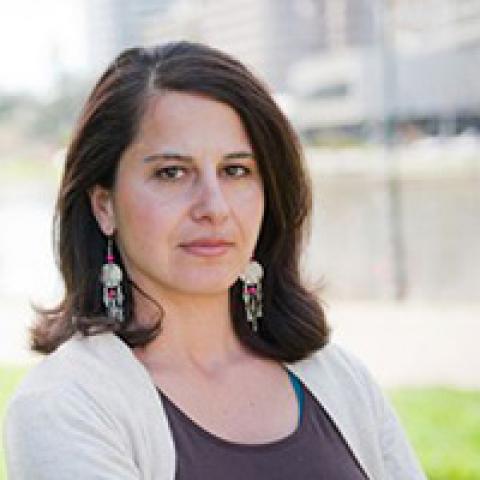 Another another episode in Egypt’s political drama is unfolding in the "lawless Sinai," or the "Wild West" as it’s often called.

The murder mystery, also referred to as the “Ramadan Massacre,” which killed 16 Egyptian border guards last Aug. 5, comes complete with a showdown of political rivals, Muslim extremists and riveting plot twists, leaving observers at the edge of our seats. The antagonist, Wael Hamdy, an Egyptian “leftist” lawyer who recently brought a case against Hamas for the killing of the border guards stated: “I filed the case because I was worried about the state of national security in my country after the rise of the Muslim Brotherhood to power and its unclear policies and links with Hamas.”

Today, unlike the early days of the revolution, political figures in Egypt are completely divided and vying desperately for control, meanwhile ignoring blistering plots taking place in the Sinai. Last Thursday [March 14], charges were further ratcheted up by another lawyer, Samir Sabry, holding Hamas responsible for masterminding the entire operation. Sabry filed a complaint with the prosecutor general, claiming Hamas had ordered the deadly attack and described the incident as “premeditated murder and a breach of Egypt’s sovereignty.” These serious charges are not only counter-intuitive, but by all accounts, the allegations are utterly baseless, factually unsubstantiated and target the easiest scapegoat.

Even a slightly closer look at this badly played charade would reveal decades of lawlessness in the Sinai that's been bubbling beneath the surface. The far-reaching future implications of what's at stake, however, will determine not the least of which, who will control the troubled region. If the stated goal is truly to provide ‘security’, an honest evaluation and critical analysis of the facts and information by all the actors — which is severely lacking — must be undertaken.

Since clear evidence as to who was responsible for the "Ramadan massacre" may never be forthcoming — as with any murder mystery — a good detective seeks to uncover the motive by asking questions, namely who has the most to gain from the crime. To analyze the motive, we should look at the short- and long-term effects, and fall-out and ask: who will control the troubled region? What is clear is that without a shred of evidence Hamas was blamed by all parties. Within hours, the Rafah border was completely sealed, the notorious travel ban was enacted, and the illegal siege and collective punishment of 1.5 million Palestinians was intensified.

What is also clear is that from a military standpoint, the killing of the army officials was a complete disaster. Yet, the security failure should not be seen as the shortcomings of the Egyptian army alone. The incoming government inherited a legacy of "lawlessness" which began in 1979 as a result of Egypt’s peace treaty with Israel. According to the Security annex of the Camp David accords, Egypt is forbidden from deploying army officers or soldiers in the entire Sinai Peninsula without permission from Israel.

Following the attack, Israel did allow Egypt to deploy some of its border guards with “light arms and armored vehicles,” which was the first time since 1967 that the Egyptian Air Force sent its jets to the area. It must be also be noted that today there are reportedly approximately 1,500 extremists heavily armed with anti-aircraft missiles, kalashnikovs and RPGs in the lawless territory. They are widely reported to be supplied with US-made arms, having entered through Sudan and Libya following the NATO intervention.

If the stated goal of Egypt’s peace treaty with Israel is to secure the troubled region, what has changed to prevent future attacks? Logically, limiting Egypt’s military presence to secure its own borders would seem a rather foolish policy. In fact, the Bedouin community has long been warning Egypt of the security vacuum and growing danger on its border, ''but no one listened to us,'' one sheik said. Why then, if security is the primary concern, are Egyptian troops prevented from being deployed, allowing extremists to arm themselves and flourish, unchecked for decades when violence and ‘terror’ was easily the foreseeable outcome?

Following last year’s attack, instead of asking such logical questions to get to the bottom of the situation, political parties began mudslinging with their political rivals, exchanging rumors with the media who followed with their rain of articles. By speculating about events and reporting them as facts, the media spread false reports, leaving Egyptian citizens utterly confused, completely resigned and, as noted above, misplacing blame on their neighbors.

In Lebanon’s Al-Akhbar, Imad al-Sous, an expert on Hamas at the Free University of Berlin observed: “After Morsi took office, rapprochement between Hamas and Egypt followed. At the time, the Israeli press expressed concern over this development, as restrictions once imposed by the Mubarak regime had now become political opportunities for Hamas,” therefore, diplomatically and politically benefiting Hamas. Military incidents, such as those in Rafah, only serve to invite further restrictions on Hamas and the Gaza Strip. “Hamas was the party most adversely impacted by the attack,” he argued, stressing that the incident had nothing to do with the closure of the tunnels, something that would not happen until later.”

Conversely, turning to statements made following the attack by Israeli and Egyptian military officials — again, without a shred of evidence and which the media took without investigating — it would seem that Hamas was responsible for the incident. Revealingly, former Israeli Ambassador to Egypt Zvi Mazel even candidly went as far as to state: “If terrorism continues from Sinai to Gaza or from Sinai directly to Israel or from Sinai-Gaza-Israel, at a certain time at a certain point Israel will be forced to act, even to penetrate into Sinai, and it may change everything.”

When analyzing the security situation from the standpoint of facts, motive and or any objective analysis, the whole charade becomes much clearer. Using “security” as a basis to destroy the Gaza tunnels, which are the last remaining lifeline to Gaza’s Palestinians in the absence of an open border — and are also used by armed groups — brings up the deep contradictions at play, and disregards logical solutions altogether.

Unless Egyptian political figures, media and citizens begin to unite and look closely at the realities on the ground, and directly address the problems at hand, the tensions in Sinai are guaranteed to explode — and as the former Israeli official said, the results of neglecting the Sinai issue will “change everything.”

Noura Khouri is a Palestinian currently in the Bay Area after having recently returned from living in Egypt for the past year and a half, during which time she spent two months living in Al-Arish and traveling all over the Sinai and Gaza. She has worked for the past decade as a human rights activist, campaign strategist and community organizer and lived and worked in occupied Palestine from 2005-07. Follow her tweets @road2tahrir.