The working assumption according to which the Mossad is currently operating is that eventually the world powers will reach an agreement with Iran. 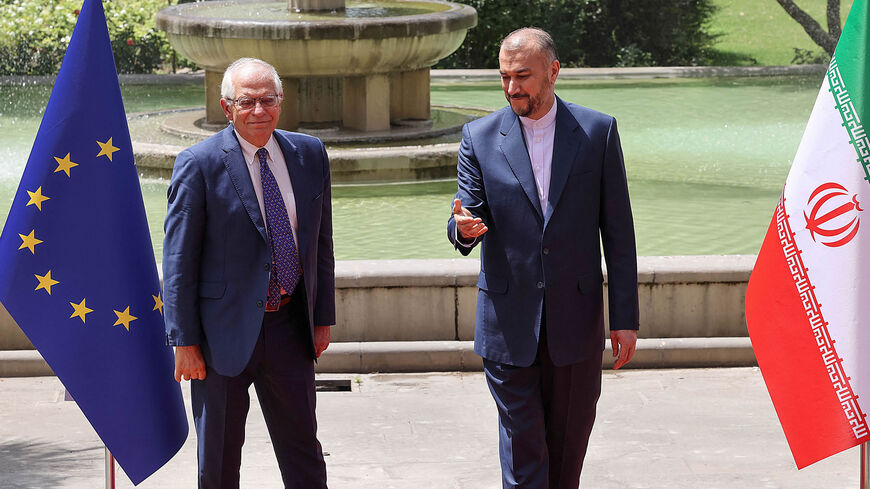 “Now is the time to save the Iran nuclear deal” was the headline of a July 26 op-ed by European Union Foreign Policy Chief Josep Borrell in The Financial Times. Borrell went on to describe his efforts as coordinator of negotiations with Iran to bring the sides together for a return to the 2015 agreement curbing Iran’s nuclear program and the draft he had proposed that is now on the table awaiting the sides’ decisions.

“This text represents the best possible deal that I see as feasible. After 15 months of intense, constructive negotiations. … I have concluded that the space for additional significant compromises has been exhausted,” wrote Borrell.

Has it, indeed? Israeli officials agree with Borrell’s assessment. “Borrell tried to delay this moment as long as he could,” a top Israeli diplomatic source in Jerusalem told Al-Monitor on condition of anonymity. “But he was left with no other choice. The agreement is on the table. Both sides appear tired of the contacts and seem to have reached an end point.”

This senior source noted, “The Americans too have despaired of this event.” US Special Representative for Iran Rob Malley recently conveyed a message to Israel saying he does not believe the Iranians will accept Borrell’s proposed text, the source said, adding, “In his [Malley’s] opinion, this deal is dead.”

Officials in Jerusalem are pleased with this state of play. Israel’s prospects of delaying a new or reconstituted agreement with Iran were not considered high to begin with, but right now its campaign appears to have achieved a resounding historic victory. “There is strong opposition to the deal in Iran too,” a senior diplomatic source in the Middle East told Al-Monitor on condition of anonymity. “Supreme Leader [Ayatollah Ali] Khamenei sees the new deal as a document of surrender; Iranian President Ebrahim Raisi will never sign this agreement without Khamenei’s blessing.”

Can Israel now uncork the champagne bottles and concentrate on reaching agreement with the United States on a joint plan to increase pressure on Iran and beef up sanctions, while keeping up its increasingly intense war of attrition against the Iranians?

Probably not. Speaking on condition of anonymity, another Israeli diplomatic source who has been following contacts with Iran for years, prior to the 2015 deal, put it this way: “The nuclear agreement with Iran is like a cat with nine lives. Right now, it has exhausted its nineth life, but we will soon see that this cat has an infinite number of lives. Nothing is dead. Ultimately, both sides have a clear interest in reaching agreement.”

Borrell’s statement is not the end of the road, according to his source, who surmised that the true deadline will come up in November if no progress is achieved by the congressional mid-term elections. “That is when Israel can truly uncork the champagne bottle,” the source said. “But right now, things are stuck as they have been many times in the past, and yet each time the sides return to the negotiating table.”

Not everyone in Israel is sanguine about this current state of affairs. The Mossad continues to assume that an agreement will ultimately be reached because the Americans, Iranians and Europeans all need it. The seeming dead end in the negotiations is of no comfort to the top Mossad echelons under Director David Barnea.

The organization, as well as other Israeli security agencies, continues to place a premium on obtaining quality intelligence information regarding Iran’s intentions in order to ensure that it is not gearing up for a nuclear breakout, a move of historic dimensions and repercussions. Israel is also focused on monitoring Iran’s creeping escalation of uranium enrichment.

Iran’s prospects of achieving nuclear weaponization capacity are of the greatest concern to Israeli intelligence, given the potential for concealing such activity from international inspections and other surveillance. “There are no nukes without weaponization,” an Israeli intelligence source told Al-Monitor on condition of anonymity. “As long as there is no progress on that front we can be relatively calm, but there are things in this area that we may only find out in real time and therefore, we cannot let down our guard even for one minute.”

President Joe Biden’s Middle East advisor Brett McGurk also shared his assessment that negotiations with Iran had been exhausted, telling a group of think tank experts last week that it is “highly unlikely” the 2015 nuclear deal will be revived in the near future. McGurk added that the Biden administration intends to use sanctions and diplomatic isolation against Iran, “but not needlessly escalate the situation."

Israel interprets this policy as an intent to avoid tougher sanctions on Iran, contrary to the “maximum pressure” policy adopted by then-President Donald Trump. In other words, despite their pessimism on the future of an agreement, the Biden administration is keeping the door open to Iran. McGurk reportedly said Iran wants the United States “to add something to the pot” to sweeten the deal, but the United States has refused.

A senior Israeli intelligence source believes that Iran continues to demand an easing of sanctions on the Islamic Revolutionary Guard Corps (IRGC). Since Biden has rejected Iran’s demand to remove the organization from its list of terror-supporting groups, the Iranians are now demanding that the United States exclude companies and plants controlled by the IRGC from its economic sanctions.

Iran is also demanding a guarantee that the United States will adhere to the agreement and not pull out as Trump did in 2018. “This is something that cannot be promised given the US political system, and the Iranians know it,” the intelligence source said.

To sum up, the endless attempts to reach agreement on a nuclear deal with Iran have been exhausted for the umpteenth time, reaching a crucial deadline. And what lies beyond that deadline? Probably a new deadline down the line, and so on.