Neither Washington nor Tehran are calling it quits, but experts are skeptical an EU proposal to revive the nuclear deal can break the deadlock. 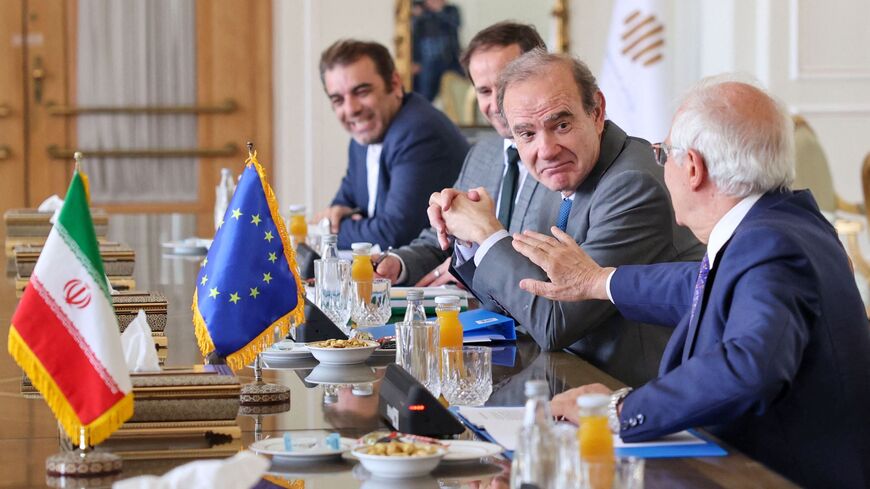 A compromise to restore the landmark Iranian nuclear accord that the European Union says is the best possible offer for both parties is being considered by decision-makers in Washington and Tehran.

More than a year of delicate diplomacy aimed at reviving the tattered 2015 accord, known as the Joint Comprehensive Plan of Action (JCPOA), has come down to a draft text recently put forward by EU foreign policy chief Josep Borrell.

The EU has acted as an intermediary in the indirect talks between the United States and Iran. Writing in The Financial Times, Borrell described the proposal, which includes the hard-won concessions made in the previous rounds of talks, as “the best possible deal that I, as facilitator of the negotiations, see as feasible.” The window for significant new compromises has closed, he said.

US State Department spokesperson Ned Price told reporters Thursday that Washington is reviewing the draft understanding and will share its reactions directly with the EU.

“We’ll engage privately with our European allies, but again, we have been willing to accept the deal that has been on the table for some time now and Iran has not,” Price said.

European-brokered negotiations in Vienna to restore the original deal, which placed strict limits on Iran’s nuclear program in exchange for the lifting of US and international sanctions, stalled in mid-March. Two days of talks held in Doha in late June ended without progress or a date set for another round of discussions. US officials said Iran caused the breakdown by coming to the table with a new set of demands.

An EU source speaking not for attribution said there is no deadline for the two sides to respond to Borrell’s proposal but that the “space for negotiation is now exhausted.”

“What the parties can agree on is in the text,” the source said. “We will see. Things seem more difficult in Tehran to get an internal agreement.”

The main stumbles to a deal have included Iran’s insistence that the Islamic Revolutionary Guard Corps be taken off the US terrorist blacklist. The Biden administration rejected that demand, and Reuters reports that Iran’s negotiators have since asked for IRGC-related sanctions relief instead.

The Iranians also want assurances that the next US administration won’t back out of the accord, as former President Donald Trump did in 2018. The Biden administration has said a legal guarantee of the deal’s survival past 2024 isn’t possible.

Iran may also be watching the outcome of the congressional elections in November to get a sense of the political trends in the United States.

Ali Vaez, who tracks the negotiations closely as the International Crisis Group’s Iran project director, said the EU proposal falls short of Iran’s expectations and is unlikely to bridge the remaining gaps between the two sides.

“It's really hard to imagine that any kind of mutually acceptable formula could be found at this stage,” Vaez said.

“Although the parties are not willing to admit that the talks have failed, effectively I don't think there is a way forward," he said. "I'm almost certain that Iran will not accept the revised proposal.”

But an Iranian diplomatic source sounded caution, telling Al-Monitor that Tehran is “open to new ideas as long as they will contribute to the maximum benefit from the agreement. Otherwise, the agreement will be futile.”

With no breakthrough in sight, Iran is making alarming advances in its nuclear program.

The United States now estimates that Tehran’s so-called breakout period — the time needed to amass enough fissile material for one nuclear bomb, if it chooses to do so — has gone from one year to "weeks or less."

Kamal Kharrazi, a senior foreign policy aide to Iran's supreme leader, said Iran has the "technical ability” to build a bomb but that there has been no decision to do so. Iran has long maintained that its nuclear program is used for peaceful purposes only.

Iran’s nuclear ambitions topped President Joe Biden’s agenda in Israel, during which he pledged that the United States was “not going to wait forever” for Iran to rejoin the JCPOA. He said he would be willing to use force as a “last resort” to stop Tehran’s pathway to a nuclear weapon.

Speaking on condition of anonymity, a top Israeli diplomatic source in Jerusalem told Al-Monitor that US Special Envoy for Iran Robert Malley has recently conveyed to Israel his belief that the Iranians will not accept Borrell’s proposed text. Malley’s reported assessment echoed that of Biden’s Middle East adviser Brett McGurk, who told a group of think tank experts last week that the nuclear deal’s restoration is “highly unlikely."

The Mossad spy agency, meanwhile, is working off the assumption that a deal will be reached, Al-Monitor has learned.

As US officials downplay expectations that a deal can be struck, concerns are growing for the fate of several US-Iranian citizens wrongfully held by Tehran. On Wednesday, Iran released on furlough Morad Tahbaz, an environmentalist with Iranian, British and American nationality.

His release appeared to be tied to an Oman-facilitated deal in March that brought home two other UK-Iranian citizens. An Omani official told Al-Monitor that Muscat is putting pressure on Tehran to grant his full release from the country. Tahbaz is currently under house arrest in the Iranian capital with an ankle bracelet.

Following a phone call with Omani Foreign Minister Badr Al Busaidi on Wednesday, Malley tweeted it is “high time that [Tahbaz] and the three other unjustly detained US citizens return home.”