His daughter Tara Tahbaz described the news of his temporary release as "surreal." 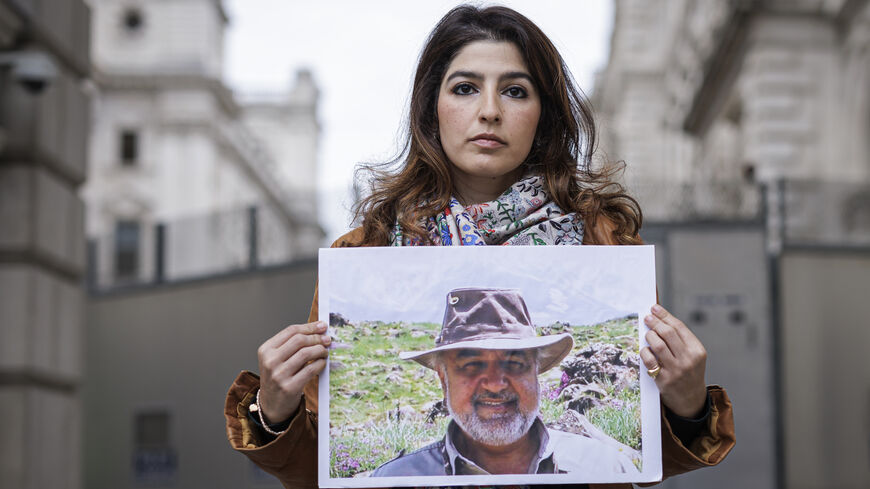 Roxanne Tahbaz holds a photograph of her father, Morad Tahbaz, outside the Foreign, Commonwealth and Development Office on April 13, 2022, in London, England. - Rob Pinney/Getty Images

Morad Tahbaz, a UK-born American citizen held in Iran, was released Wednesday on temporary furlough with an ankle bracelet, his daughter confirmed to Al-Monitor.

The environmental activist, 66, is now staying at his in-laws' apartment in Tehran with his wife, Vida Tahbaz, who was previously barred from leaving the country under the terms of her travel ban.

"It's amazing news, but they're still not home,” she said. “There's still a long way to go to get to that happy ending."

Iran is holding Tahbaz and three other US-Iranian citizens — Siamak Namazi, Baquer Namazi and Emad Shargi — on vague espionage charges. Rights groups accuse Iran’s elite Revolutionary Guards of arresting dual nationals and foreigners to gain leverage for sanctions relief, the unfreezing of assets and other concessions from their home countries.

Tahbaz, a conservationist and entrepreneur, was jailed in January 2018 along with eight of his colleagues from the Persian Wildlife Heritage Foundation. The wildlife team deployed camera traps to monitor Asiatic cheetahs and other endangered species, which Iranian authorities said were used to spy on its military installations and obtain classified information.

In November 2019, Tahbaz was sentenced in a closed-door trial to 10 years in prison for illegal “contacts with the US enemy government” and “assembly and collusion against Iran's national security.” During a family prison visit, the conservationist reportedly displayed signs of torture.

Tahbaz also holds British citizenship but was not part of an Oman-facilitated deal between Iran and the United Kingdom in March that freed two British-Iranian prisoners, Nazanin Zaghari-Ratcliffe and Anoosheh Ashoori. Tahbaz was only briefly released before he was returned to Tehran’s notorious Evin prison.

“It definitely was very disappointing,” Tara said. “He was knowingly left behind with my mother.”

She called on the United States and the United Kingdom to “use every channel possible to get them home” and for the UK government to “follow through with its promise of bringing him home.”

“Home is not Tehran for him,” she said. “Home is here with his children.”

The families of the imprisoned Americans have expressed concerns that their fates’ are explicitly linked with the stalled nuclear talks. The Biden administration says it's quietly working to secure their release and denies any linkage with efforts to restore the JCPOA.

Asked about Tahbaz, a State Department spokesperson said the safe return of wrongfully detained US nationals "remains one of our utmost priorities."

"We are grateful to Oman and the UK for continuing to press Iran to fulfill this commitment," the spokesperson told Al-Monitor in emailed comments.

"Simply put: Iran is unjustly detaining innocent US nationals and others and should release them immediately."