Following the release of Marine veteran Trevor Reed from Russia, Americans with family members wrongfully detained by Iran are ramping up their pressure on the Biden administration to cut a deal with Tehran. 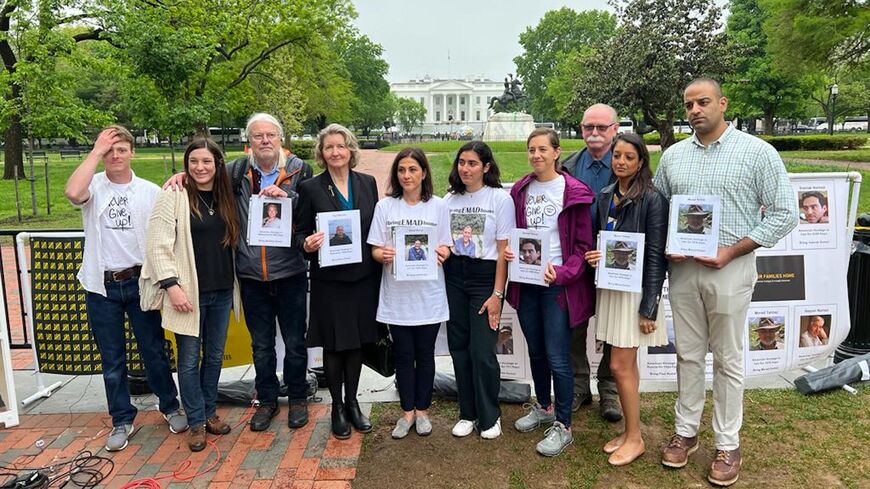 Families of wrongfully detained Americans hold a demonstration on May 4, 2022, in Washington, DC. - The Foley Foundation

Trevor Reed’s release from Russian detention has offered renewed hope to the families of US citizens held in Iran, who on Wednesday joined forces to urge President Joe Biden to get personally involved in bringing their loved ones home.

Gathered outside the White House on Wednesday afternoon were the relatives of roughly a dozen Americans who are wrongfully detained or held hostage by foreign governments such as Iran, Russia and Venezuela.

The Foley Foundation, a hostage advocacy group named for slain journalist James Foley, estimates there are at least 60 US citizens who meet this description. Four of them — Siamak Namazi, Baquer Namazi, Emad Shargi and Morad Tahbaz — are held by Iran on spying charges that monitoring groups say are bogus. A US legal permanent resident, Shahab Dalili, is also detained in Iran on trumped-up charges.

The families hope to build on the momentum of last week’s prisoner swap between the United States and Moscow. The surprise deal saw Reed, a former US Marine detained for three years, return home in exchange for the release of a convicted Russian drug smuggler.

“With Trevor coming home, that brings more hope. But you’re still waiting for that call,” said Tara Tahbaz, whose father has been jailed in Iran since 2018. Her mother, Vida Tahbaz, is barred from leaving the country under the terms of her travel ban.

Babak Namazi urged Biden “to utilize all the tools he has at his disposal” to ensure the release of his brother Siamak and father Baquer.

Siamak Namazi was the only American of six not returned home as part of a detainee swap negotiated by the Obama administration in 2016 and is currently the longest-held American prisoner in Iran. His elderly father Baquer Namazi, a former UNICEF official, is prohibited from leaving Iran despite his rapidly declining health.

“If the president is ready and determined to resolve this, my family and other hostages can be home within days,” Babak Namazi told Al-Monitor from his home in Dubai.

Their families’ pleas come as indirect nuclear negotiations between the United States and Iran are at a standstill, largely due to Tehran’s demand that Washington de-list the Islamic Revolutionary Guard Corps as a foreign terrorist organization.

The Biden administration says it's quietly working to secure the release of the Americans, and denies any linkage between indirect talks over the prisoners and those aimed at restoring the nuclear accord.

The nuclear deal "has always been an uncertain proposition,” State Department spokesperson Ned Price told Al-Monitor during Wednesday’s press briefing. “It doesn’t do the families any good to tie their fates to something that may or may not happen.”

Tara Tahbaz says she’s pinning her hopes on the Biden administration to free her father, a conservationist who holds American, British and Iranian citizenship. The United Kingdom secured the release of two British-Iranian dual nationals — Nazanin Zaghari-Ratcliffe and Anoosheh Ashoori — in March, but Tahbaz remains in prison.

“We definitely felt betrayed by the UK government having left him and my mother behind when they should have been part of that,” Tahbaz said.

On Monday, Biden sat down with the parents of Austin Tice, a freelance journalist who has been missing in Syria since 2012 and is believed to have been seized by the regime or affiliated forces. The families at Wednesday’s White House demonstration are seeking meetings of their own.

“I think once [Biden] hears our story directly from us — as a husband, a father, a grandfather, an uncle — he would really understand and see that our dad needs to come home,” said Emad Shargi's daughter Hannah.

“Our message is very simple. Our dad is an innocent American,” said his other daughter Ariana. “We miss him terribly.”