Participants don't feel the call made progress toward securing their loved ones' release and hope for a future audience with President Biden. 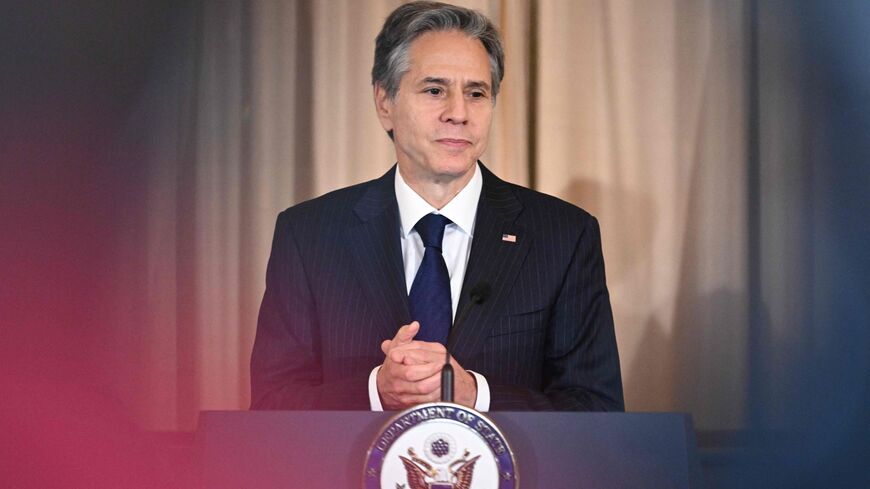 US Secretary of State Antony Blinken speaks during a Pride Month reception in the Benjamin Franklin Room of the State Department in Washington, DC, on June 17, 2022. - MANDEL NGAN/AFP via Getty Images

For several families of Americans held hostage or wrongfully detained abroad, a virtual meeting with Secretary of State Antony Blinken on Wednesday did little to reassure them that the administration is making the safe return of their loved ones a priority.

Participants who spoke with Al-Monitor described an at times tense video call with Blinken on Wednesday, with one calling it a “box-checking” exercise. The family members, some of whom requested anonymity because the secretary told participants the call was off-the-record, were encouraged by Blinken's decision to meet with them virtually but said more should be done to bring their relatives home.

The Biden administration says that securing the release of unlawfully detained Americans is a top priority, and in a statement on Wednesday, State Department spokesperson Ned Price said the department will “continue to partner with families through regular and transparent communication.”

“Secretary Blinken affirmed that working to bring their loved ones home is something he is personally focused on,” Price said in a readout of the call.

Families were heartened when Blinken held a similar video call within a week of his confirmation as Secretary of State in February 2021. In the time since, the administration has secured the release of two Americans detained in Venezuela — Gustavo Cardenas and Jorge Fernandez — and Marine veteran Trevor Reed, who was held in Russian detention for more than two years.

Blinken told those on Wednesday’s video call that he would follow up with President Joe Biden on a letter sent this month by a coalition of hostages’ families who called for his direct involvement.

Babak Namazi, whose brother Siamak and father Baquer are held by Iran, said he appreciated the high-level engagement from Blinken but said “at this point, it needs to be result-oriented, and not promise-oriented.”

“That has been the source of my family's frustration for the past almost six and a half years now, through three administrations,” he said.

Namazi’s plea comes as indirect nuclear negotiations between the United States and Iran are at a standstill. Separate from the Vienna-based talks, the Biden administration says it's quietly working to secure the release of the Americans — the Namazis, Emad Shargi and Morad Tahbaz. But families are concerned that the fate of their loved ones and the faltering nuclear talks are implicitly linked.

“We know from public reporting that the JCPOA has stalled,” said Emad Shargi's wife, Bahareh Shargi, using the acronym for the landmark nuclear agreement. “For our family, bringing my husband home is a humanitarian effort, which should never be paralyzed by political machinations.”

Not receiving invites to Wednesday's call were families of American citizens and legal permanent residents held under travel ban in Saudi Arabia or imprisoned in Egypt on charges that human rights groups say are politically motivated.

They include the family of journalist Salah al-Haidar, a dual citizen who was conditionally released from prison in February 2021 and is now barred from traveling outside Saudi Arabia. His mother, Aziza al-Yousef, a women’s rights activist and US resident prior to her arrest, is also barred from leaving Saudi Arabia under the terms of her provisional release.

Al-Yousef’s daughter Sarah al-Haidar took part in a meeting with White House officials last week to discuss her mother's and brother’s cases ahead of Biden’s upcoming trip to Saudi Arabia.

The State Department did not respond to a request for comment on whether families of individuals held under travel bans, including those in Saudi Arabia, were invited to take part in the secretary’s video call.

Of those who participated, many hoped for a commitment from Blinken that Biden would sit down with them individually or in region-specific groups. But they were told a personal audience with the president isn’t required to move their cases forward, multiple family members said.

“During that call, it was also made clear that the final decision lies with the president,” said one participant. “Everyone walked away bewildered by that contradiction.”

The parents of Reed, who was released in an April prisoner swap with Russia, met with Biden in March after they protested outside the White House. Biden also met with the parents of Austin Tice, a freelance journalist missing in Syria since 2012, after his mother was publicly recognized at the White House Correspondents Dinner in May.

The family of Majd Kamalmaz, another American who disappeared in Syria, say they’ve struggled to get the attention of the White House and have made repeated requests for their own Oval Office meeting.

Price said in a statement that Blinken “relayed to the families that President Biden is aware of each of their loved ones’ cases.”

But the families, many of whom demonstrated outside of the White House in early May as part of their newly launched “Bring Our Families Home” campaign, see an audience with Biden as key to bringing their captive relatives home.

Babak Namazi, whose brother Siamak was the only American of six not returned home as part of a 2016 prisoner swap with Iran, said there’s no question meeting with Biden would have an impact on these cases.

“Had he come on the call for even one minute, the president undoubtedly would have removed any question about his commitment to the families,” Namazi said.