Meeting between US and Palestinian presidents described as ‘warm’; UAE opts out of anti-Iran alliance; Biden agenda may include Saudi-American families banned from traveling. 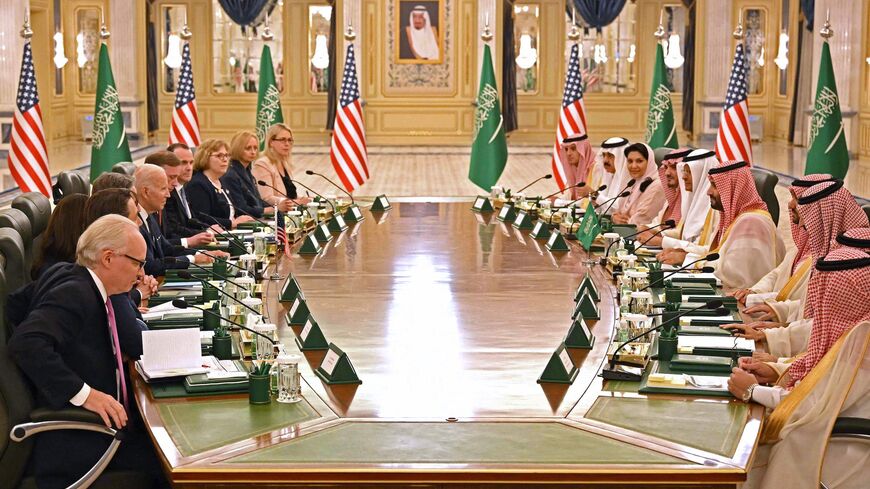 On the one hand, US President Joe Biden’s trip to Israel this week conveyed “power and intimacy,” reports Ben Caspit, who covered the visit from Israel.

“Biden clearly captured the hearts of Israelis,” writes Caspit. “He managed that despite being considered a political ‘leftist’ in Israeli terms, and an antithesis to his predecessor Donald Trump, who is more popular in Israel than in the United States. Biden was warm, attentive and sometimes funny. His love for Israel is clearly authentic and inspires trust. He is not ashamed of it, taking pride in it. Israelis love it.”

But on Iran, Biden stuck to his preference to re-establish the Joint Comprehensive Plan of Action (JCPOA), if Iran is willing.

A sweeping US-Israel Strategic Partnership Joint Declaration references a “pledge” by the US “never to allow Iran to acquire a nuclear weapon, and that it is prepared to use all elements of its national power to ensure that outcome.” However, Israel worries a resurrected nuclear deal would have a momentum all its own, especially given the global energy crisis.

An additional 1 to 1.5 million barrels per day would be a significant addition to the market, as Daniel Yergin said on Al-Monitor’s "Reading the Middle East with Gilles Kepel" podcast last week.

Biden was "unwilling, despite the pleas of both [Israel Prime Minister Yair] Lapid and President Isaac Herzog, to set a deadline for the negotiations on Iran’s nuclear program, nor to draw a 'red line' that if crossed by Iran would turn talk into action,” writes Caspit.

Biden's reiterated commitment to keep the Islamic Revolutionary Guards Corps (IRGC) on the US list of foreign terrorist organizations, even if it is a deal killer, is old news, as we reported here. Both Washington and Tehran have already moved on from the issue.

The Biden administration considers the enhanced deterrent posture with Israel and its Gulf partners as both a complement to an Iran nuclear deal, and a hedge if Iran backs out of the talks, because you can’t do effective diplomacy without deterrence.

Israeli hopes that Israeli-Gulf cooperation would explicitly target Iran were likely disappointed by the statement of Anwar Gargash, diplomatic advisor to UAE President Sheikh Mohammed bin Zayed al-Nahyan, that the UAE is in the “process of sending an ambassador to Tehran.” Gargash admitted that the UAE has "serious issues with Iran with its regional politics," but clarified that his country is not open to "cooperation targeting any other country in the region, and I specifically mention Iran."

As we wrote here last week, “conflict and instability are often bad for business, and, in this case, ultimately bad for normalization and regional integration. The prospect of an Iranian nuclear weapon, or a return to a more assertive regional posture by Iran, would keep the Middle East on the edge of conflict, perhaps even a nuclear arms race. This is in addition to longstanding fault lines in Yemen, Lebanon, and Iraq."

Abbas is hoping for a return to the pre-Trump era of US-Palestinian ties. Biden had promised during the presidential campaign to reopen the US consulate in Jerusalem and the Palestinian mission in Washington, both closed under US President Donald Trump.

“The president reassured us that the US consulate will open but that the issue of the PLO being on the terrorism list is an issue for Congress to approve. This will be difficult at this time,” the source told Kuttab.

Biden told Abbas that his administration was instrumental in the Israeli decision to pause settlements in Atarot/Qalandia area and the controversial E1 plan in east Jerusalem, according to the source in the meeting.

Biden seems to believe that Lapid and Defense Minister Benny Gantz "will allow for a wider margin for political activities," Kuttab reports.

Biden also reportedly told Abbas that he will press for further investigation into the killing of Palestinian American journalist Shireen Abu Akleh.

While many Americans are hoping for some accommodation from Saudi Arabia on oil exports to reduce gas prices, some American families are hoping Biden will secure permission for loved ones who are barred from leaving the kingdom, Elizabeth Hagedorn reports.

National Security Adviser Jake Sullivan, asked on July 15 whether Biden would raise the cases of US-Saudi citizens who are under arrest or travel ban, said, "He always raises human rights, and that will be no different on this trip.  And you’ve heard him in the past say that cases of American citizens are a priority for him everywhere and they’re a priority for us in Saudi just as they are in many other countries."

“By the Freedom Initiative’s count, at least 89 US persons or their family members were detained, disappeared or placed under Saudi travel bans at some point in 2021," Hagedorn reports.

In case you missed it