US president to blend diplomacy and deterrence in approach to Iran, region. 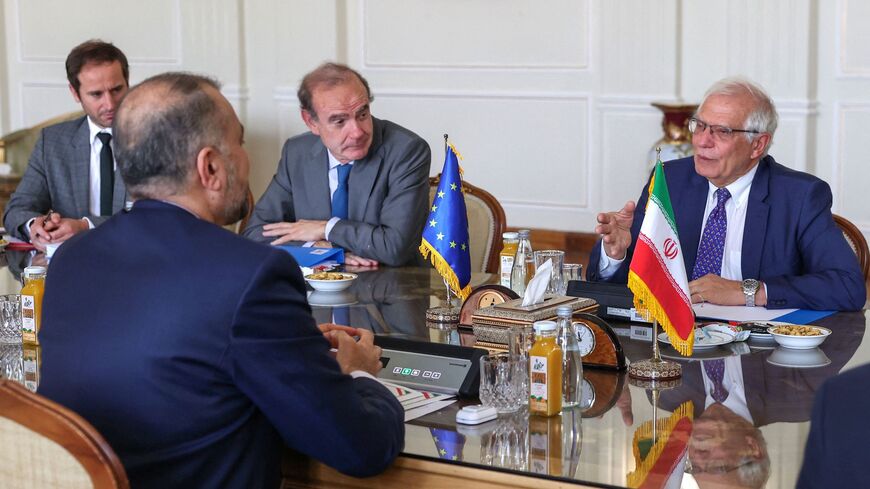 Washington builds on regional support for its agenda

US President Joe Biden’s trip to the Middle East next week will set the context for what will likely be the final round, or rounds, of indirect talks with Iran to agree on restarting the Joint Comprehensive Plan of Action (JCPOA).

The indirect talks on the Iran nuclear deal in Doha between US and Iranian officials, brokered by EU Iran envoy Enrique Mora, are increasingly complemented by a strengthened US diplomatic and deterrent posture in the Persian Gulf, in process for the last year and formalized by the Biden trip.

The regional strategy is a turnaround from 2015, when US partners in the region felt sidelined by the JCPOA, negotiated between Iran and the US, UK, France, Germany, the EU, Russia and China. This time, US regional partners are actually, well, partners, in the Biden strategy.

First, the Biden Administration has reset its early scratchy ties with Saudi Arabia. There is no ‘"deterrence,’" or meaningful Arab posture toward Iran, or plan to end the war in Yemen, without the Kingdom securely within the US security fold. The Biden team has adapted, not without domestic political friction, to the realities of diplomacy and deterrence in the Middle East by opening a new chapter with Saudi Arabia.

Second, Arab leaders have taken up their own diplomatic initiatives with Iran, in parallel with the JCPOA talks in Doha. For example:

The Iraq-brokered Iran-Saudi talks have complemented the efforts of Washington’s Yemen envoy, Tim Lenderking, to sustain a UN ceasefire, now in its fourth month. Iran President Ebrahim Raisi, at a press conference with Kadhimi in Tehran on June 26, said, "The continuation of this war is fruitless and will not result in anything but the suffering of the Yemeni people, so this war must be ended as soon as possible and the ceasefire can be a step towards resolving the issues." That is Iran’s strongest statement to date in support of the ceasefire.

Third, the Biden administration is advancing enhanced security coordination among Israel and Arab states, a significant boost to a US-led deterrent posture and an essential complement to any diplomacy.

As Ben Caspit reports, "In March, a meeting was reportedly held under US auspices between the army chiefs of Israel and Saudi Arabia and attended by high-ranking officers from Egypt, Jordan, Qatar, Bahrain and the United Arab Emirates. Israel hopes Biden will announce the launch of this alliance during his visit, and is also expecting news that will herald progress in Israeli normalization with Saudi Arabia."

In addition, adds Caspit, "Israel hopes to hear from Biden that chances of signing a nuclear agreement between Iran and world powers are not high, and to receive from him a promise that the sanctions on Iran will not be lifted but rather tightened. Israel aspires to reach a joint action plan with the United States in response to every possible scenario, including a surprise Iranian push toward an agreement."

Jared Szuba reports that while the recent US-backed defense cooperation between Israel and Gulf states has been a giant step forward, the Biden administration is unlikely to immediately deliver the levels of commitment that Israel and Arab states may be seeking. For now, the US is weighing how it can support air defense cooperation against Iran as a start to broader regional defense partnership, NSC spokesperson John Kirby told reporters yesterday.

Getting to yes with Iran in Doha

While a balanced diplomacy/deterrent strategy offers a better shot at closing the remaining gaps between the US and Iran on the JCPOA, there are still a number of familiar, if difficult, issues that need to be negotiated between the parties themselves, via the EU.

Last week, US Special Envoy for Iran Robert Malley described the indirect talks in Doha between US and Iranian officials, moderated by Mora, as “a wasted occasion,” adding Iran came to the negotiations with a new set of demands, as Elizabeth Hagedorn reports.

Amir-Abdollahian tweeted on July 6, after speaking with High Representative of the EU for Foreign Affairs Josep Borrell, that "We remain ready to negotiate a strong & durable agreement. US must decide if it wants a deal or insists on sticking to its unilateral demands. Mutually exclusive."

Borrell, for his part, had tweeted that "decisions are needed now. This is still possible, but the political space to revive the #JCPOA may narrow soon."

The outstanding issues to close the deal, from what we can tell, seem a mix of both new and old, and maybe not ultimately out of the realm of hard-fought compromise.

Conflict and instability are often bad for business, and, in this case, ultimately bad for normalization and regional integration. The prospect of an Iranian nuclear weapon, or a return to a more assertive regional posture by Iran, would keep the Middle East on the edge of conflict, perhaps even a nuclear arms race. This is in addition to longstanding fault lines in Yemen, Lebanon, and Iraq, as well as addressing the global food crisis affecting many Middle Eastern countries — we could go on.

The global energy crisis caused by the war in Ukraine may encourage the US to stay in the talks.  Energy expert Daniel Yergin, speaking on a forthcoming episode of the podcast Reading the Middle East with Gilles Kepel, said Iran’s return to the oil market would lead to an additional 1 million-1.5 million barrels per day of oil — a "significant" amount given tight capacity and the current crisis.

An Iran nuclear deal would, or should, mitigate the risk of conflict, especially when complemented by the regional diplomacy taking place involving Iran, while getting Iranian oil into the market. There are still the difficult issues still to be thrashed out in Doha. Diplomacy alone is of course not a strategy; a robust deterrent posture is required to deal with any and all contingencies. And those pieces are falling into place as Biden heads out to the Middle East.