Iran’s long shadow from Vienna to Baghdad and beyond

More may be riding on the JCPOA talks than just the fate of Iran’s nuclear program. 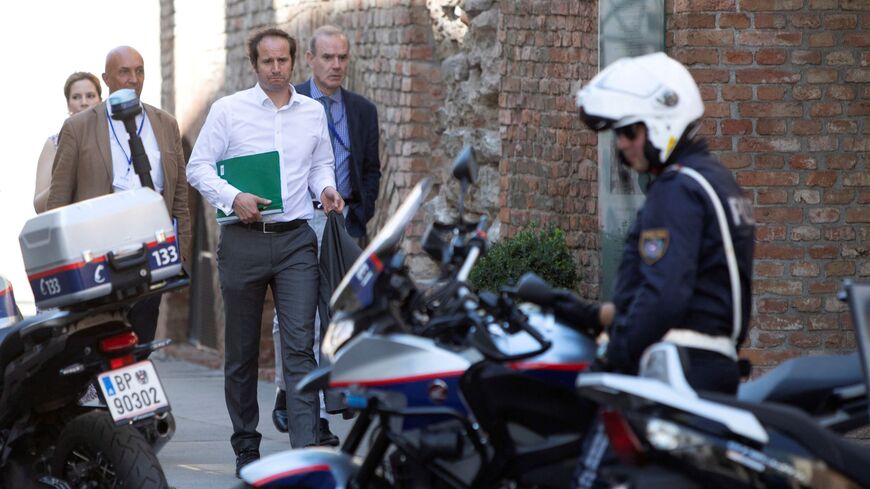 Deputy Secretary General of the European External Action Service Enrique Mora arrives at the Coburg Palais, the venue of the Joint Comprehensive Plan of Action (JCPOA) in Vienna, on Aug. 4, 2022. - ALEX HALADA/AFP via Getty Images

The parties to the Joint Comprehensive Plan of Action (JCPOA) are meeting in Vienna for the first time in nearly six months, giving new life to the frequently-declared-dead Iran nuclear deal.

The meeting follows EU Policy Chief Josep Borrell’s last chance (more or less) consensus paper, which has been studied by both Washington and Tehran ahead of the Vienna meetings.

The US position is that it is ready to sign the deal on the table. The burden, in Washington’s score, is on Iran to let go of those issues which have nothing to do with the 2015 agreement itself, such as: removing designation of the Islamic Revolutionary Guards Corps (IRGC) as a terrorist group; so-called "guarantees" that the US will not pull out of the deal again, as US President Donald Trump did in 2018; and a dispute with the International Atomic Energy Agency (IAEA) over its past nuclear research.

As we wrote last month, the first two may be more about Iranian domestic politics and more easily solved. The IRGC is a powerful force in Iran, including economically, and its companies and affiliates will want their share of the revenues if sanctions are lifted. If there is a deal, this sharing of the wealth will ultimately be sorted out in Iran, not in Vienna or Washington.

And Iran of course knows that there can be no "guarantee" beyond the US administration’s commitment of "compliance for compliance" as long as President Joe Biden remains in office. The US has, or could have, the same concern about Iranian compliance. The Islamic Republic has made major advances in its nuclear program since 2018, and could also bail on the agreement at any time.

The stickiest issue remains the IAEA's rebuke of Iran for failing to cooperate with an agency investigation into questions about undeclared nuclear material and past nuclear research, writes Ali Hashem. IAEA Director Rafael Grossi had characterized the dispute as a possible "fatal blow" to the talks.

Iran, as we wrote, considers the matter of past activities separate from its JCPOA commitments, and would prefer they be treated that way.

And there is precedent. In 2015, the IAEA issued both a final assessment of Iran’s past and present nuclear activities, and a concurrent resolution on JCPOA implementation, to allow the nuclear agreement to proceed.

While many had nearly written off the JCPOA, the US is a yes for the present deal, and Iran has said it wants a deal, as Ali Hashem reports. Neither side has set a deadline to date, despite regular declarations, especially from Washington, the EU, and the IAEA, that time may be running out.

While US and EU patience may be thin for continued Iranian haggling, the EU may still resume its role as mediator if the parties believe that the IAEA issue can be resolved.

Vienna may not necessarily be the last stop for the talks. Iranian President Ebrahim Raisi plans to attend the UN General Assembly meetings in New York next month. One can envision talk of a Biden-Raisi meeting, especially if the sides are close to a deal.

A nuclear Iran is bad for business … and regional security

The JCPOA is all about Iran’s nuclear program and sanctions relief, but we’ll hedge toward correlation if not causality with regard to what happens next in the region.

Biden’s trip to Israel, the West Bank, and Saudi Arabia last month strengthened US engagement and deterrence on a wide range of regional issues, including and especially on Iran.

A degree of comity between Iran and the West over a nuclear deal, if it happens, would seem to be a boost for regional security and integration.

Conversely, a breakdown in the nuclear talks, or a return to a more assertive regional posture by Iran, would keep the region on the edge of conflict, perhaps even a nuclear arms race.

A regional diplomatic flurry with regard to Iran is taking place in the Gulf.

Qatar and Oman have been key facilitators in dealing with Iran. Doha hosted the last round of EU-mediated talks between Iranian and US diplomats. Omani mediation has helped secure the release of Americans and other foreign nationals held prisoner in Iran.

The UAE is already planning for an exchange of ambassadors with Iran. "And we may soon see a meeting of Iranian and Saudi foreign ministers," Saudi analyst Ali Shihabi tells Al-Monitor, "perhaps even before or during the UNGA meetings next month."

Another hopeful sign is the renewal of the Yemen truce this week, which Iran supports, as Elizabeth Hagedorn reports.

On the other side of the ledger, Israel bombed Gaza today following an escalation of tension with Islamic Jihad, Iran’s top Palestinian ally, which can’t be disentangled from Israel’s recently heightened concerns over Hezbollah, and by extension Iran. As Ben Caspit reports, "While Hezbollah is far stronger than Islamic Jihad, there is no telling how a round of Israeli air raids on Gaza, even if planned to last several days, would turn out."

And that brings us to Iraq, the most sensitive flashpoint for US-Iran hostilities since the overthrow of Saddam Hussein in 2003.

Iran appears to be interested in keeping a volatile and precarious situation on low boil for now, as it weighs its next moves, and the fate of the Vienna talks.

The Iraqi political crisis is among the Shiite parties, with populist cleric Muqtada al-Sadr, whose party won the most seats in the October 2021 elections, on one side, and the Coordination Framework alliance on the other.

Sadr compelled his followers to storm the Iraqi Council of Representatives, or parliament, last week following the Framework’s nomination of Mohammed Shia al-Sudani, a longtime ally of Maliki, as prime minister.

Although IRGC-Qods Force commander Esmail Qaani was in Baghdad as the crisis broke out, his mission was focused on mediation, not reaction. The demonstrations between Sadr and Framework supporters have so far been raucous but mostly peaceful.

Sadr is calling for a "revolution" against the Iraqi system and corruption, and looking to drive Maliki out of Iraqi politics after the leak of a tape on which Maliki threatened Sadr and just about everyone else.

The current situation is precarious and, if it escalates, could spill over into Kurdish and Sunni regions, as Mustafa Saadoun reports.

Iraqi and international parties are rallying around a national dialogue proposed by interim Prime Minister Mustafa al-Kadhimi, which is backed by President Barham Salih and Speaker Mohamed al-Halbousi, to tamp down tensions and outline a path to elections.

Sadr today appeared cool to a UN mediation effort, and remains insistent, for now, that Maliki and Sudani cannot be part of any negotiation or compromise.

Iran’s interest in Iraq is that the Shiite parties stay united, but Sadr has made that harder, as Ali Mousawi Khalkhali explains.

While Sadr is not Iran’s preferred partner in Iraq, the relationship is more fluid and businesslike than is often reported.

Sadr has not ruled out his participation in a national dialogue, but he has conditions, as we report here.

If or when there is a reconciliation among the Shiites, the deal will ultimately be done between Sadr and Tehran.

The prospects for a more peaceful path forward in Iraq may depend, at least in part, on Iran’s calculations relative to the United States, its key rival for influence in Iraq. And those calculations will be influenced by whether there is a nuclear deal or not.