The meeting between the US and Palestinian presidents was described as "warm," exceeding low expectations. 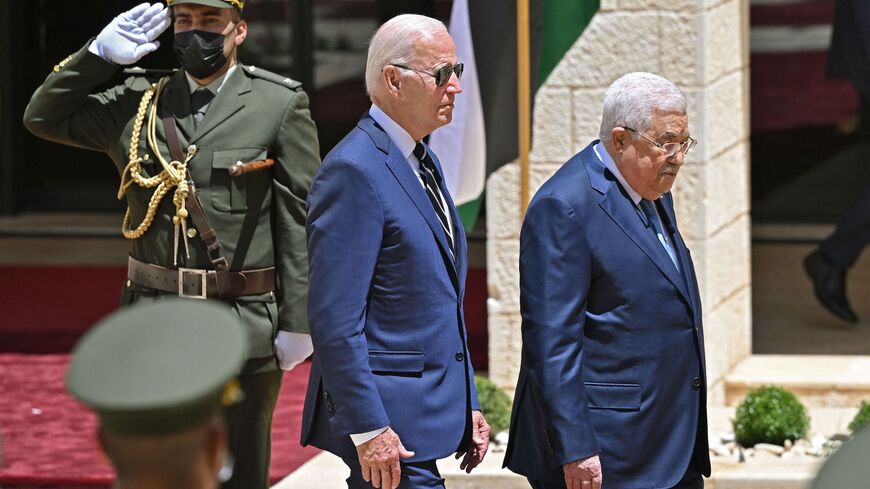 US President Joe Biden (C) is received by Palestinian president Mahmud Abbas (R) during a welcome ceremony at the Palestinian Muqataa Presidential Compound in Bethlehem in the occupied West Bank on July 15, 2022. - MANDEL NGAN/AFP via Getty Images

US President Joe Biden appears to be angling towards a return of Palestinian-Israeli peace talks. Although he has said that the time is “not ripe,” a reference to the caretaker government in Israel and his own caution, a source who attended yesterday's meeting between President Biden and the Palestinian leadership said that Biden is committed.

While the Palestinian leadership had extremely low expectations, the source in the meeting told Al-Monitor that the US-Palestinian summit was “very, very warm.” According to the source, the US is focused on ensuring that illegal settlement activities are suspended and claimed credit for quashing plans in the Atarot/Qalandia area and the E1 area of East Jerusalem. Israel had recently agreed to delay, but not cancel, those controversial plans for settlements.

The Palestinian delegation headed by President Mahmoud Abbas was happy that the Biden administration reiterated publicly the basis of a peace settlement — an independent, contiguous and viable Palestinian state on the 1967 borders; that Jerusalem issues be left to the talks; and that all unilateral actions must be stopped.

In private, Biden assured continued partnership with the Palestinian Authority, the source said. Biden spoke to the Israeli leadership about the need to stop unilateral actions and settlement activities, and that the US consulate in Jerusalem will be reopened.

“We agreed to open a new page based on the peace process as it was before Trump, and that US support to Palestinians will occur on a gradual basis,” the source said. The US president seems to believe that Prime Minister Yair Lapid and Defense Minister Benny Gantz will allow for a wider margin for political activities.

Biden and Abbas appear to have disagreed on Arab countries' normalization with Israel. Biden noted that it could help the peace process, while Abbas said that solving the Palestinian conflict should be the priority and that the Arab peace plan (first initiated by the Saudis) should be the reference point.

But according to the senior Palestinian source, “We told the US president that the idea of integrating Israeli in the region will not produce security or peace but what concerns us is the need for pressure on Israel to return to the talks.”

Palestinian officials told Al-Monitor that the Negev Forum between Arab leaders and Israeli officials does not concern them, because “there is no political process. What we care about is US commitment to stopping settlements and restarting peace talks.”

Biden promised during his campaign to reopen the US consulate in Jerusalem and the Palestinian mission in Washington. The Palestinian source told Al-Monitor that the latter is more difficult  because “the issue of the PLO being on the terrorism list is an issue for Congress to approve. This will be difficult at this time.”

Finally, the Palestinian source said that the slain Palestinian-American journalist Shireen Abu Akleh was discussed, and that the US president insists on a continuation of the investigation.