Yemen truce brings relief but no path to lasting peace

Yemen's UN-sponsored truce is a priceless relief for civilians and a diplomatic success for the UN envoy for Yemen. But because the root causes remain unsolved, a permanent peace is still doubtful. 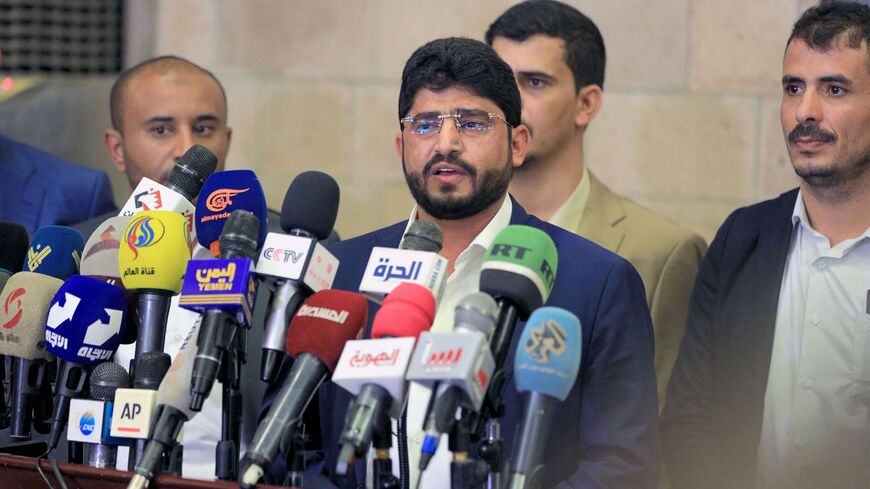 Major General Yahya Abdullah al-Razami (C), chairman of Yemen's Huthi rebels' "military committee for negotiations", holds a press conference in the Huthi-held Yemeni capital Sanaa on June 8, 2022. The United Nations special envoy arrived in Yemen for talks on reopening routes to a rebel-blockaded city that has proved the thorniest problem in implementing a fragile truce. - ALAA MOHAMMAD/AFP via Getty Images

Yemen has entered its third month of calm and cessation of fighting. A two-month truce that began on April 2 and expired on June 2 has been extended for two more months. Weapons have fallen silent, and rivals have engaged in UN-sponsored peace talks. The full implementation of the truce will hopefully pave the way for a permanent ceasefire and political negotiations on resolving the seven-year-old conflict.

Since 2015, Yemen has not seen a truce similar to the current one, which is still holding, improving the lives of civilians nationwide. This peace breakthrough is a priceless relief for civilians, a diplomatic success for the UN envoy for Yemen, and an opportunity for Yemen's newly formed leadership to prepare for a new chapter of conflict. But the pause of violence does not necessarily mean a passage to lasting peace and final consensus.

UN Special Envoy for Yemen Hans Grundberg said on June 2 that  the two parties' consent to renew the ceasefire was "a rare glimmer of hope" that a resolution is possible. Considering the extreme hostility between the Houthi group and the UN-recognized government of Yemen, the UN envoy finds it hard to give confident promises of ending the conflict.

Grundberg added, "I count on the parties' continued cooperation in good faith to build trust and take meaningful steps towards providing a peaceful future for all Yemenis." Thus far, the mitigation of civilian suffering in Yemen over the last two months has been undeniable, and Grundberg's success is conspicuous.

On June 6, the UN envoy presented a revised proposal to the delegations during Amman-hosted talks, detailing the gradual re-opening of roads to Taiz, Yemen's third-largest city, and other provinces, along with an implementation mechanism and guarantees for the safe travel of civilians.

The Yemeni government has approved the proposal. On Tuesday, June 7, Abdulkareem Shaiban, the head of the Yemeni government delegation, said in a press release that the UN proposal suggests re-opening five roads in Taiz and other regions. That is the minimum level, according to Shaiban, needed for mitigating the misery of people in Taiz.

While that proposal has sparked optimism in Yemen, the implementation will be a long process with no guaranteed success. It remains uncertain whether the Houthis will stick to the UN's plan.

During a meeting with the European ambassador to Yemen on Tuesday, Yahia Al-Ruzami, the head of the Houthi delegation, said that they would return to Sanaa to consult with their leadership. Accordingly, re-opening the roads in Taiz is still a disputable point, which may cause a sudden disruption of the truce.

Yaseen Al-Tamimi, a Yemeni political researcher and commentator, described the present military calm in Yemen as "a war that has stopped temporarily." He believes that the ceasefire had granted the Houthi group new gains. Since the start of the truce in April, fuel ships have kept arriving and offloading in Houthi-dominated ports in Hodeida, generating cash for the group.

"Houthis have guaranteed more revenues that will consolidate their military preparedness and cement their grip on most of the northern areas in Yemen," Tamimi said. Therefore, the cessation of fighting has been positive in the humanitarian aspect, but not necessarily on the long-term military level.

The Houthis fear this truce can be a trick, and they still rely on the military option to maintain their power. Houthis believe that their opponents use the ceasefire to rearrange themselves for another round of war.

Houthi-appointed defense minister Mohammed Al-Halimi said this week during a field visit to fighters in Al-Jawf province, "Everyone knows that the enemy, during the armistice, is rearranging the situation of its [groups] …  but we say to the aggressors and their followers that what you are working on today will not be more than what you did during the past years, and its fate will be a dismal failure."

The diplomatic progress achieved in Yemen has not tackled the root causes of the conflict, which began in 2015 when the Houthi group ousted the internationally recognized government. Houthis call their action a revolution, while the government deems it a coup.

Amidst the continued lack of genuine rapprochement between the conflict parties in Yemen, "I feel cautiously optimistic," US Special Envoy for Yemen Tim Lenderking said in a call with reporters on Tuesday, June 7. "I know that, having worked on this file for a long time, how challenging the issues are inside Yemen." He also warned, "This war has not ended. It's a lull. It's a break. It's a truce. We need to continue building."

Nowadays, Taiz, a city besieged for seven years, awaits the end of its imprisonment. The public optimism about opening all routes is not high, and civilians are still skeptical about bringing the situation to normal.

Salman Mohammed, a resident in Taiz city, told Al-Monitor, "Taiz will see war if the truce fails, and both sides are prepared for another round of fighting." More Houthi armored vehicles arrived  on June 6, he said.

"What is happening on the ground in Taiz is different from what is being said in the media," Mohammed added. "They report on peace progress, but in reality, the situation is still tense here,"