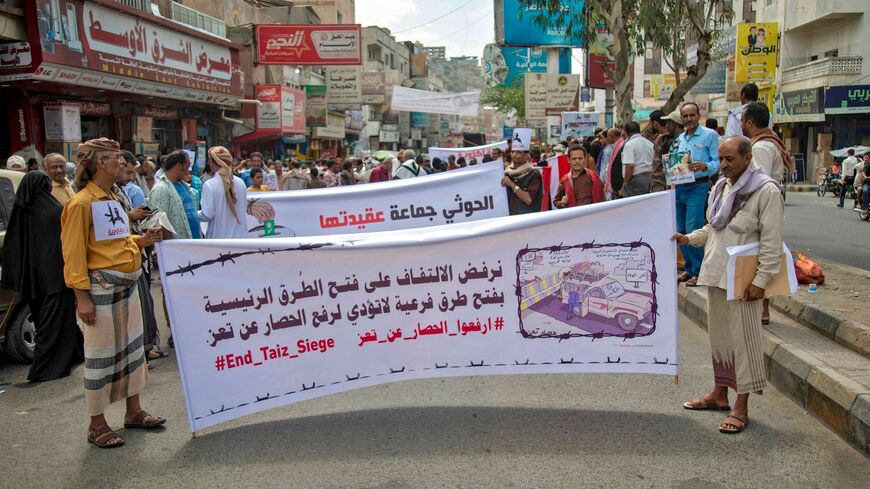 Yemeni demonstrators demand the end of a years-long blockade on the Yemeni third city of Taez on July 26, 2022. Taez, which has a population of roughly 600,000 people, has been largely cut off from the world since 2015 when the rebels closed the main routes into the city. Conflict since 2014 between the Iran-backed Huthis and government forces has left hundreds of thousands dead in fighting or through illness and malnutrition. There has been a truce since April. - AHMAD AL-BASHA/AFP via Getty Images

Our take: Yemen’s warring parties have agreed to a two-month extension of a United Nations-mediated truce, but a political settlement to end the civil war remains a distant prospect.

On Tuesday, United Nations Special Envoy for Yemen Hans Grundberg announced the renewal of a truce that since April has brought relative calm to Yemen after more than seven years of grueling conflict between the Iran-aligned Houthi movement and the Saudi-backed government.

The truce has resulted in a major drop in civilian casualties and increased humanitarian access to a country where more than two-thirds of the population requires outside aid to survive.

Both Saudi Arabia and Iran have expressed support for the truce's extension. In a statement Tuesday, Secretary of State Antony Blinken called on Yemen’s warring parties “not to let this opportunity pass,” and to work with Grundberg on his proposal for an expanded truce agreement.

Scott Paul, senior manager of humanitarian policy at Oxfam America, said the pause in fighting has had a tangible impact on people’s lives.

“The truce has given people in Yemen a measure of hope that things are going to be better,” he said. “It’s really down to [the warring parties] to decide that a broader recovery and a more promising outlook for Yemeni people is of greater value to them than their military prospects or their hold on power.”

The existing truce contains three main confidence-building measures. The Saudi-led coalition and Yemeni government have made progress on two of them: resuming international flights out of Sanaa’s airport and clearing fuel deliveries into Hodeidah port.

But the Houthis have yet to reopen the roads into Yemen’s third-largest city of Taiz. The rebels have imposed siege-like conditions on Taiz since 2015, cutting off residents from critical services.

The Houthis have signaled that their compliance with the truce will depend on whether the cash-strapped Yemeni government resumes paying public sector salaries that have been suspended for years.

The lack of salary payments, particularly in Houthi areas, has worsened economic hardship in the Arab world’s poorest country. The UN estimates 80% of Yemen's total population is below the poverty line, and the cost of living is on the rise.

The Houthis are “now trying to bring national salary payments into the picture as a form of stimulus for their areas,” said Peter Salisbury, senior Yemen analyst at the International Crisis Group. “It appears that, to an extent at least, negotiations around Taiz are being framed increasingly as kind of ‘salaries for roads.’”

In the next two months, the UN envoy has his work cut out for him. Grundberg’s proposal for an expanded truce would offer a mechanism for paying the salaries of public sector workers and civilian pensions. He’s also calling for the reopening of roads in Taiz, additional flights to and from the Sanaa airport and the regular flow of fuel to Hodeidah.

“We need compromise from all sides to make progress, which includes initial Houthi action to open main roads to Taiz,” US Special Envoy for Yemen Tim Lenderking told Al-Monitor.

“The United States and international community stand ready to support Yemen’s peace and recovery process, but the Yemeni parties must themselves choose peace,” he said.

Russia’s threat to shutter a prominent Jewish organization could be Russian President Vladimir Putin’s way of signaling his dissatisfaction with newly installed Prime Minister Yair Lapid’s stance on Ukraine. Officials from both countries failed this week to reach a deal over the Jewish Agency's Russian branch.

“[Putin] is unwilling to overlook Israeli declarations that deviate from the semi-objective, or at least polite, stand adopted in the days of [then-Prime Minister] Naftali Bennett,” a senior Israeli diplomatic source told Al-Monitor. But as Ben Caspit reports, some believe Putin manufactured the crisis to pressure Israel against selling natural gas to Europe.

Lebanon is accustomed to hearing Israeli jets and surveillance drones circling overhead. Over the past 15 years, at least 22,000 Israeli overflights have been documented over the small Mediterranean country’s airspace. Andrea Lopez-Tomas reports on new research that examines the “disturbing and traumatizing Israeli presence in Lebanese skies” and its consequences for public health. The research is based on 243 complaints that Lebanon sent the UN Security Council between 2006 to 2021. The lead investigator tells Lopez-Tomas that the overflights have contributed to a “feeling of general trauma.”

Investments adhering to environmental, social and governance (ESG) criteria are gaining momentum in the Middle East. A 2020 HSBC survey found that 41% of regional investors wished to adopt an effective ESG investment policy. The Middle East has long lagged in ESG investments, but Elia Preto Martini reports on why many investors consider sustainable assets attractive from an economic perspective and how increasing interest in ESGs has led to changes in the region’s business practices.

Frequent water cuts by Tunisia’s authorities are putting millions in the North African country at risk. Sghaier Hidri reports from the countryside of Faj al-Tamr, where residents form long lines to fill up plastic bottles from a waterfall. The repeated water cuts come as Tunisia undergoes an economic crisis made worse by Russia’s invasion of Ukraine. Political instability in the country deepened after a controversial referendum held last week granted near unchecked executive power to President Kais Saied.

A deal brokered by Turkey and the United Nations to resume grain exports out of Ukraine’s Black Sea ports has raised Ankara’s standing on the world stage, as well as that of President Recep Tayyip Erdogan. “Facing an economic crisis and a looming election, the Turkish leader will welcome the positive media coverage that comes with playing such a central role in arranging a successful accord,” reports Andrew Wilks. Turkey maintains good relations with both sides, having not joined in Western sanctions against Russia while at the same time supplying Ukraine with armed drones.

Amberin Zaman speaks to former Ukrainian diplomat Yevgeniya Gaber about Turkey's role as a mediator in the Russia-Ukraine conflict.

Gilles Kepel interviews Zineb Mekouar about her debut novel, “La Poule et son Cumin” (The Hen and its Cumin), which highlights the social and political divisions of contemporary Morocco.

Ben Caspit speaks to Arkady Mil-Man, the head of the Russia program at the Israel National Institute for Security Studies, about increasing tensions between Moscow and Jerusalem.