A potential deal between Egypt and India to import 500,000 tons of Indian wheat in exchange for Egyptian fertilizers is in the works amid ongoing global wheat shortages. 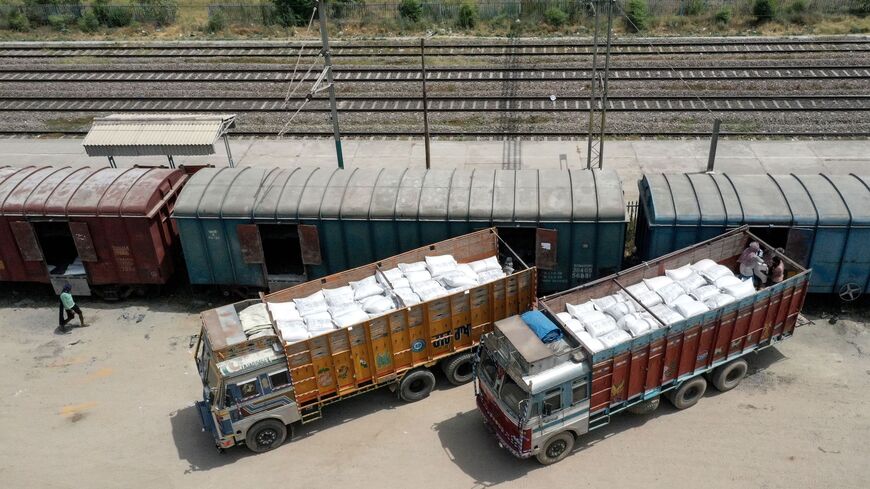 This aerial photograph shows workers loading sacks of wheat from trucks to a freight train at Chawa Pail railway station in Khanna, Punjab state, on May 19, 2022. - SAJJAD HUSSAIN/AFP via Getty Images

Egypt is currently in talks with India over a deal to import 500,000 tons of Indian wheat in exchange for Egyptian exports of fertilizers and other products, the country’s Minister of Supply and Internal Trade Ali al-Moselhi revealed to Bloomberg on June 3.

Moselhi said that he discussed the potential swap deal with the Indian ambassador to Egypt on the sidelines of the annual meetings of the Islamic Development Bank held in Sharm el-Sheikh in June. Bloomberg quoted Moselhi as saying that he met the Indian ambassador on June 1 “to discuss the potential swap agreement to secure 500,000 tons of wheat, through various shipments.”

Ahmed Kamal el-Attar, head of Egypt’s agency for import and export regulation, spoke to Al-Monitor about the soaring prices of wheat in the global market. He said, “The price of wheat in international markets has risen by more than 5% due to the rise in wheat futures on the Chicago Board of Trade by as much as 5.4% to $10.95 per bushel, up from of $10.45, with forecasts of lower cereal production for 2022 and 2023, according to a report by the US Department of Agriculture.”

Attar added, "Wheat prices have jumped by 40% so far this year due to several factors, most notably the war between Russia and Ukraine, both major global producers of wheat. The conflict has disrupted current grain exports as well as the cultivation of next year's crop. Consequently, the global wheat shortage will not be limited to this year. The other reason is bad weather conditions and severe heat waves that damaged crops in the United States and India.”

Attar noted that to ease the growing shortage in food supplies, Egypt agreed to buy 500,000 tons of wheat from India through a swap deal for Egyptian products such as fertilizers. He said, “The potential deal will see 500,000 tons of wheat shipped to Egypt from India, which does not usually export much of its production, despite being one of the largest wheat producers in the world.”

Attar said that Egypt’s strategic reserves of wheat are sufficient for four months. After purchasing the local crops for the current season, the Egyptian wheat reserves will meet the country's needs until the end of 2022, according to cabinet statements.

On a related note, Attar explained that just days ago, Egypt barred the entry of an Indian wheat shipment of 55,000 tons originally intended for Turkey. He added that the Turkish quarantine authorities had flagged the consignment over phytosanitary concerns. The consignment carrier diverted to Egypt, but the Egyptian Central Administration of Plant Quarantine refused to receive it as it did not comply with Egyptian agricultural quarantine requirements.

He explained that the Egyptian Central Administration of Plant Quarantine examines shipments from India and other countries before they are exported. “A committee from the administration travels to the country of origin and examines the consignment to make sure it is free of pests or diseases. The committee also monitors its storage at warehouses and silos and supervises the shipping and loading process.”

Attar added that Egypt only accepts wheat from areas of India known to be free of certain plant diseases.

Nader Nour el-Din, former assistant to the Egyptian foreign minister, told Al-Monitor via phone that Egypt and Morocco are one of the world’s biggest wheat consumers, adding, “India is interested in opening up to a large market like Egypt," but "The exported wheat must not be afflicted with diseases or insects. No shipment is allowed to enter Egypt until it's verified to meet all specifications.''

The Jordanian public broadcaster Al-Mamlaka revealed June 2 that Jordan has inked a deal with the United Arab Emirates and Egypt to plant wheat, barley and corn in Jordan. Minister of Industry, Trade and Supply Youssef Shamali was quoted as saying that work will begin soon to prepare for the cultivation of the three crops in Jordan and that the deal will be financed through Emirati investments.

According to Shamali, the three countries also reached another agreement under which the UAE will provide gas to Jordan, while Egypt will supply Jordan with ammonia for use in the manufacture of fertilizers by the Arab Potash Company and the Jordan Phosphate Mines Company. Surplus fertilizers will be exported.