Egypt looks for boost from gas deal with Israel, EU

The EU, Egypt and Israel signed an agreement for the export of natural gas to Europe, which would reduce the latter’s dependence on Russian gas. 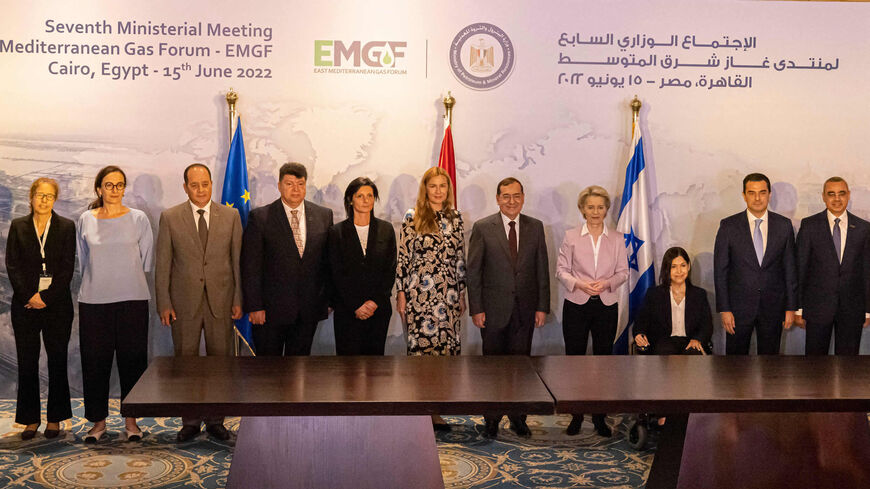 CAIRO — The European Union, Israel and Egypt signed a deal June 15 to boost the export of natural gas from Israel to Europe via Egypt.

The signing of the agreement came during the 7th ministerial meeting of the Eastern Mediterranean Gas Forum (EMGF) held in Cairo.

Egypt’s Minister of Petroleum and Mineral Resources Tarek el-Mulla said in a statement during the signing ceremony that the deal is a very important step that can be built upon to promote cooperation between the EMGF member states, including the EU.

Israeli Energy Minister Karine Elharrar said that the deal is an important message about the success of cooperation under the EMGF umbrella, which underscores its pivotal role in securing part of the energy supply to Europe. The fruitful cooperation would enable optimal utilization of the region’s resources and place Egypt and Israel as important players in the gas market, she continued.

EU Energy Commissioner Kadri Simson said that the deal is an opportunity for everyone to cooperate, especially since the signing of the deal comes at a difficult time for the EU, which seeks to secure reliable energy supplies.

The tripartite agreement comes as Europe seeks to meet its gas needs from the eastern Mediterranean resources as part of a plan to reduce reliance on Russian gas imports that have been affected by the Russian invasion of Ukraine.

Under the deal, Israeli gas will be sent by pipeline to liquefaction plants in the Damietta and Edco plants on Egypt's Mediterranean coast, before being exported to Europe.

Charles Ellinas, nonresident senior fellow at the Atlantic Council Global Energy Center, told Al-Monitor that the EU seeks to cut Russian gas supplies by two-thirds by the end of 2022 and to end its reliance on Russian fossil fuel by 2027.

He said that the recent deal is an opportunity for eastern Mediterranean gas to fill the gap for Europe.

Ellinas noted that the most optimal and fastest way to increase eastern Mediterranean gas volume exports to Europe is through Israel's new offshore Leviathan natural gas field where production is currently underway, and through the existing liquefaction plants in Egypt and their operation at maximum capacity.

He explained that gas liquefaction plants have allowed Egypt to immediately meet Europe’s needs. “This is perfectly in line with the Egyptian aspirations of becoming a hub for exporting eastern Mediterranean gas to Europe. However, given Europe’s plan to massively increase green energy, the need for gas imports will decline as we get closer to 2030,” he said.

Ellinas added, “In the long run, it is possible for Egypt to supply Europe with green hydrogen, given that Egypt is the country that is the most capable of meeting Europe’s needs for hydrogen in the eastern Mediterranean. Also, the abundance of solar and wind energy and a number of green hydrogen projects that are currently being developed and place Egypt on the right track.”

He said that these projects are an opportunity for Egypt to become a regional leader in the production, use and export of green hydrogen and ammonia.

Egypt is seeking to attract more foreign investments to the green hydrogen production sector. On April 20, the government approved additional investment incentives in this field.

Maher Aziz, member of the World Energy Council, told Al-Monitor, “Cooperation between eastern Mediterranean countries in the export of gas has been on the table since the EMGF’s formation, which Egypt sought to establish in order to strengthen its position as an energy hub in the region.”

He said, “The Russo-Ukrainian war, which has cast a shadow on natural gas supplies to Europe, has shown the delay in the cooperation between eastern Mediterranean countries to supply Europe with natural gas.”

Aziz noted, “Had this cooperation been made two years ago, gas exports to Europe would have been bringing huge profits to the eastern Mediterranean countries today, especially in light of the soaring global gas prices.”

He added, “The opportunity is still presenting itself, and it is good to start implementing this cooperation on the ground. This may position the eastern Mediterranean countries to be a main hub for gas supplies to Europe, which imports more than 30% of its consumption from Russia. This would also help the Egyptian plan to become a regional energy hub."

According to Elharrar, the agreement signed between Israel, Egypt and the EU is valid for three years, and will be renewed automatically for an additional two-year period. She added, during the signing ceremony, that the deal is tantamount to a commitment to share natural gas with Europe and to help with the energy crisis.

Under the deal, the EU will also encourage European companies to participate in exploration tenders in Israel and Egypt. The agreement also calls for a plan to be formulated for optimal use of infrastructure related to natural gas extraction, liquefaction and transportation.

He said that Egypt will benefit from gas transit fees and liquefaction fees, and the agreement will allow Egypt to play a strong and influential political role between some parties or countries in the eastern Mediterranean that are experiencing gas-related disputes, including the dispute between Lebanon and Israel.