Israel’s Energy Minister Yuval Steinitz and six others sign the charter of the Eastern Mediterranean Gas Forum, which brings cooperation with other partners into a second, concrete phase. 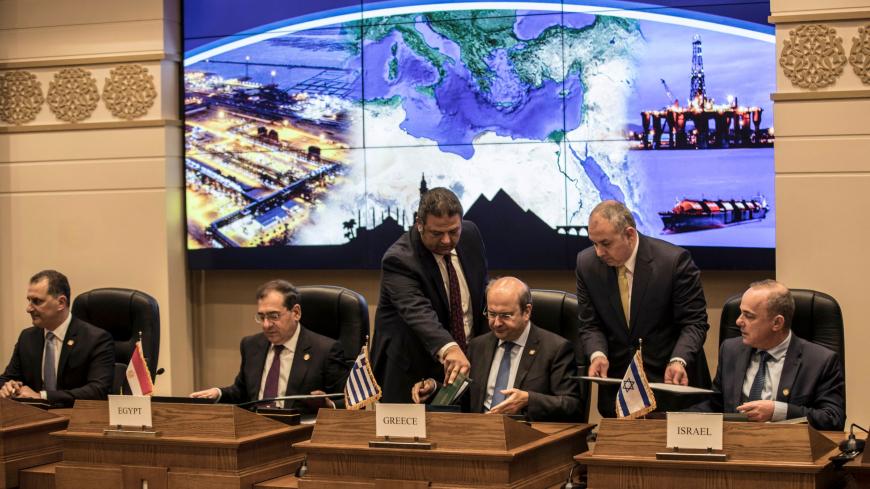 Israel's Yuval Steinitz was one of seven energy ministers to launch Sept. 22 the Eastern Mediterranean Gas Forum via videoconference at an event organized by Cairo, the forum's headquarters. The ministers also included Steinitz's Greek, Cypriot, Jordanian, Palestinian and Italian counterparts. The ambassadors of three other countries interested in joining the forum — France as a member state and the United States and the European Union — also participated.

The forum was established by Steinitz and Egyptian Energy Minister Tarek el-Molla as a smaller, informal grouping after Israel and Egypt discovered offshore natural gas fields. The idea was to facilitate talks among Mediterranean countries about exporting natural gas, cooperating on various energy issues and advancing the construction of an undersea pipeline that would transfer the gas to the south of Europe.

The Sept. 22 ceremony marked the formal transformation of the forum into a recognized international, intergovernmental body, with members digitally signing the founding charter of the new organization. The forum, which notably does not include Turkey, is also expected to include various companies and interest groups that will participate in technical meetings on energy.

The joint declaration published at the launch said the new body “aims to serve as a platform that brings together gas producers, consumers and transit countries to create a shared vision and establish a structured systematic policy dialogue on natural gas, leading to the development of a sustainable regional gas market and unlocking the full gas resource potential in the region for the benefit and welfare of its people.”

Steinitz previously served as Israel's intelligence minister and finance minister. As such, he was in constant contact with his Egyptian counterparts and dealt often with energy issues. His expertise and leadership on energy cooperation with Mediterranean neighbors kept him in the energy minister's post when the Netanyahu-Gantz unity government was formed last year.

Speaking as part of the Sept. 22 event, Steinitz said, ‘’The blessing of gas brings regional cooperation with Arab and European countries, the first of its kind in history, including contracts to export $30 billion of blue-and-white gas to Jordan and Egypt, and that’s only the beginning.” A statement issued by his ministry explained that the signing ceremony ended the first phase of the forum — establishing an initial framework and spirit of cooperation — and a step toward the second phase of working together and implementing a joint program.

Energy cooperation is essential for Israel on several levels. The country expects high revenues as the result of the discovery of the Leviathan and Tamar offshore fields, but also expects to enhance its diplomatic partnership with Greece and Cyprus, and with Egypt. The alliance with Greece and Cyprus has been evolving in recent years to also include military and defense aspects; Turkey sees this as an affront.