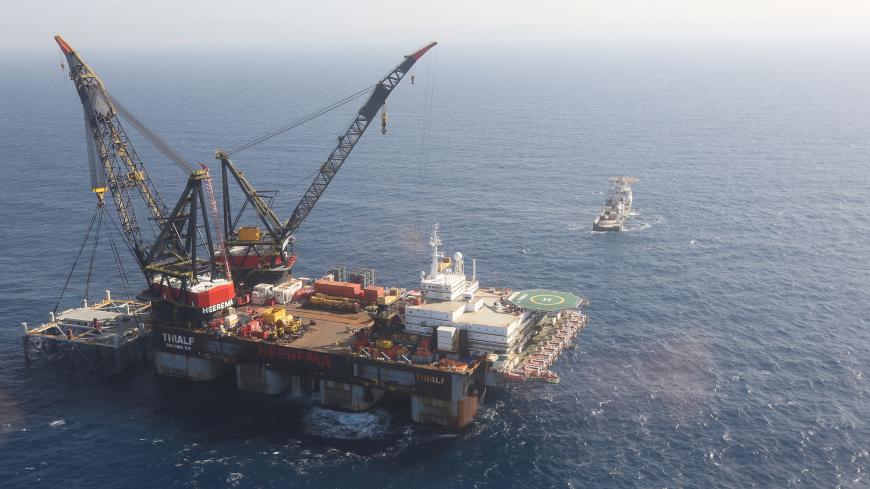 An aerial view shows the newly arrived foundation platform of Leviathan natural gas field, in the Mediterranean Sea, off the coast of Haifa, Israel, Jan. 31, 2019. - Marc Israel Sellem/Pool via REUTERS

It began at a historic press conference in Cairo Jan. 15. Israel’s Energy Minister Yuval Steinitz and his Egyptian counterpart Tarek El-Molla announced that Israel would begin pumping natural gas to Egypt. It was the final accord of a turbulent decade for Steinitz, which began in 2009, when he was appointed finance minister. This was followed by the discovery of vast natural gas fields in Israel (Tamar and Leviathan), which resulted in years of bitter social, economic and environmental battles. At the center of all this fighting were the “gas tycoons” and social activists, with Steinitz fighting both, first in his capacity as finance minister, from 2009-2013, and later as minister of energy, 2015-today. Activists took to the streets to demonstrate against him and even threatened to destroy his political career.

As he waited in Cairo airport that evening for his flight back to Israel, Steinitz could see the TV monitors playing clips from the press conference. Watching himself standing beside his Egyptian counterpart, with the flags of Egypt and Israel behind him, he felt as if he had just closed a circle. It was the first time the Egyptian public was exposed to this important example of economic cooperation between the two countries.

On another occasion, Molla called it the biggest instance of cooperation between Egypt and Israel since the signing of the 1979 peace treaty. The natural gas discoveries and ensuing export agreements not only ensure that Israel will enjoy energy independence in the next decade. It also grants it the status of a regional geopolitical power and strengthens its common interests with Egypt and Jordan, to whom Israel will also be exporting gas.

The timing could not have been better for Steinitz. This week saw the release of his book “The Battle Over the Gas” (Yedioth Aharonoth), which describes a decade of squabbles and fighting. It all began in 2010, during his first visit to the gas platform in the middle of the Mediterranean, as guest of gas tycoon Yitzhak Tshuva. It was Tshuva, together with American gas company Noble Energy, who was responsible for discovering the vast Tamar and Leviathan natural gas reserves. What Steinitz describes as a pastoral moment was the beginning of a big adventure, which ended with Israel pumping gas to Egypt and Jordan.

“Israel didn’t really treat this as a major event,” Steinitz told Al-Monitor. “I imagine that it is hard to swallow the idea that someone on the right signed this agreement, but its real importance is that it strengthens the axis of peace. Egypt is just the beginning. The plan is that much of the gas will be exported via Egypt to Europe, too. This will expand cooperation between Israel and Egypt. A journalist told me that if I had been an energy minister from [left-wing] Meretz or the Labor Party, green organizations and the entire media would lift me up on their shoulders as a hero.”

This claim is interesting and worthy of further investigation. Regardless, there can be no doubt that Israel’s transformation into a regional exporter of natural gas is an economic and geopolitical drama.

Steinitz said that gas exports “will cut the cost of electricity, but that’s just a small part of it. There are two other huge benefits. State revenues will increase by $100 million-$150 million over the next 30 years, and the contribution to the economy will be even greater, because it will spare the country the cost of importing energy.”

Steinitz could not stress enough that, “apart from the economic and geopolitical advantages of this natural gas, it also offers environmental advantages. Thanks to gas, we are able to cut pollution in Israel dramatically. We will all be healthier because of it. We will save the lives of tens of thousands of Israelis, thanks to natural gas.”

Steinitz, who has a doctoral degree in philosophy, began his career in academia. He was a popular lecturer on the philosophy of science, an author and a Peace Now anti-occupation activist. Having reached new conclusions about the geopolitical situation after the signing of the 1993 Oslo Accord, he crossed the lines and joined the Likud. He decided to turn the battles he waged over Israel’s gas resources into a book, which offers easy access to his experiences during the years he served as minister of finance and later, of energy. The book provides a glimpse behind the curtains concealing those events. There are unflattering portraits of various politicians, some of them still in office, as well as an anecdote about how one strategic consultant warned him that the gas tycoons would “kill” his political career. This occurred at the height of the Sheshinski Committee debates, which concluded that gas companies’ future profits should be cut considerably. Steinitz also uses the book to settle accounts with politicians from the center-left, like Knesset member Miki Haimovich of the Blue and White party, who wanted the gas to be left in the ground.

While his book is a subjective account that reads like a personal quest, it reflects the entire era, including events that are still subject to bitter debate. Critics claim that Steinitz actually acted against the public interest.

“The truth is the exact opposite,” Steinitz said. “This struggle changed the relationship between capital and government in Israel. For the first time, we have proved that if the finance minister and the entire government want, and if they have the backing of the prime minister, the state can win these fights. It is also a huge boost to Israel’s geopolitical status. We are members of an organization [the Eastern Mediterranean Gas Forum], which was formed as a result of my meeting in Washington with the Egyptian energy minister. Other members include Cyprus, Italy, Greece, Jordan and the Palestinian Authority. Now France has asked for membership, and more Arab states may yet join in the future.”

One person who was quick to try and score points off the historic event of Israel pumping gas to Egypt was Prime Minister Benjamin Netanyahu. He tweeted Jan. 17: “We have become an energy power. The significance of this is enormous. We will have hundreds of billions of shekels to invest in the education of our children, our health, the welfare of our parents and in strengthening our economy. I fought for the gas project blueprint so that Israel could become an influential exporter of gas on an international scale …”

Netanyahu remained true to course by downplaying Steinitz’s contribution to this process. “My one comment to Netanyahu would be that he needs to give more credit to people,” Steinitz said. “Still, I am grateful for all the heavy support he gave me at all the major crossroads in this venture, and particularly with the outline for the natural gas project. Besides, people can always give more credit.”