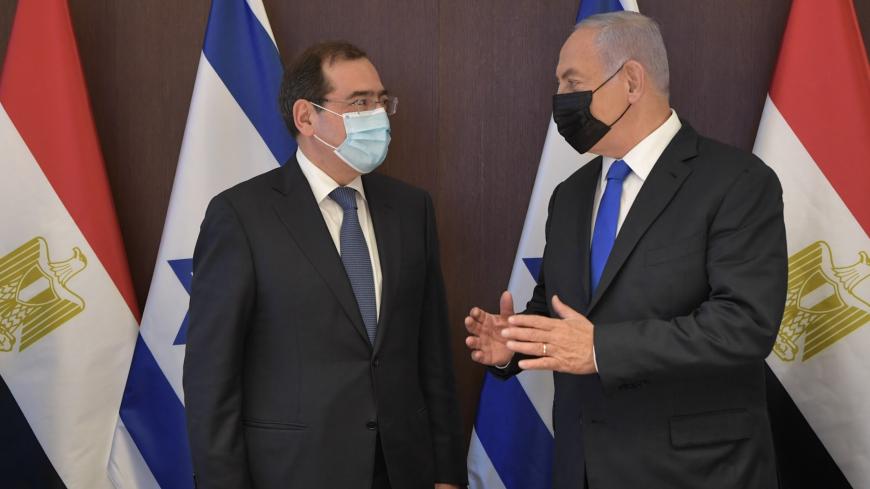 Prime Minister Benjamin Netanyahu and Energy Minister Yuval Steinitz met yesterday with Egyptian Petroleum and Mineral Resources Minister Tarek el-Mulla, on a first public visit to Israel. The last time an Egyptian senior official visited Israel was in 2016 when Foreign Minister Sameh Shoukry arrived in Jerusalem. In all, only Egypt’s foreign and intelligence ministers had visited Israel in the past 15 years.

The visit of Mulla focused on promoting the Eastern Mediterranean Gas Forum (EMGF), launched last year, for the construction of an undersea pipeline transferring liquified natural gas from Mediterranean-basin countries to Europe. Steinitz, together with Mulla, was behind the creation of this Cairo forum and the joint pipeline project. Other members of the EMGF are Greece, Cyprus, Italy and Jordan, with France and the United States interested in joining as observers.

Netanyahu warmly welcomed Mulla, stating it was an important day, "marking our continued cooperation on energy and so many other things. There is a new era of peace and prosperity for the region with the Abraham Accords. This began of course with the historic peace treaty between Egypt and Israel, but now it is becoming something that can better the lives of all the people in economic terms, and we think that this is a great opportunity for regional cooperation — Egypt, Israel and the other countries. We are an energy hub. Together we can supply not only our own needs but the needs of many other countries."

Mulla responded that "together with Minister Steinitz, we started a few years back the expansion of the cooperation in energy, which was enhanced by the foundation of the East Mediterranean Gas Forum. I am looking forward to our discussions."

Steinitz noted that the visit was of historic importance. He said that the establishment of the regional gas forum and Israeli export of natural gas to Egypt symbolizes the most significant economic cooperation between the two countries since the signing of the bilateral peace accord in 1979.

Israel's central natural gas marine field Leviathan already supplies the Israeli domestic market and exports gas to Jordan and Egypt. Its main shareholders and operators are US-based Chevron (which purchased Noble Energy last year) and Israeli Delek Drilling. Leviathan's partners have been exploring options to expand export capacities. They're considering the construction of a floating liquidation plant or subsea pipeline to link up with existing liquidation terminals in Egypt that are currently running at low capacity.

After his meeting with Netanyahu, Mulla met with Foreign Minister Gabi Ashkenazi. "I emphasized our desire to deepen civilian ties and congratulated him on his work to promote cooperation in the field of energy between our countries. Energy is an anchor for regional stability and an example of the economic prosperity that our countries gain from peace,’’ tweeted Ashkenazi after the meeting.