Strengthening ties in the field of energy between Israel and Egypt is a clear interest for both countries, but no less a significant American interest as well. 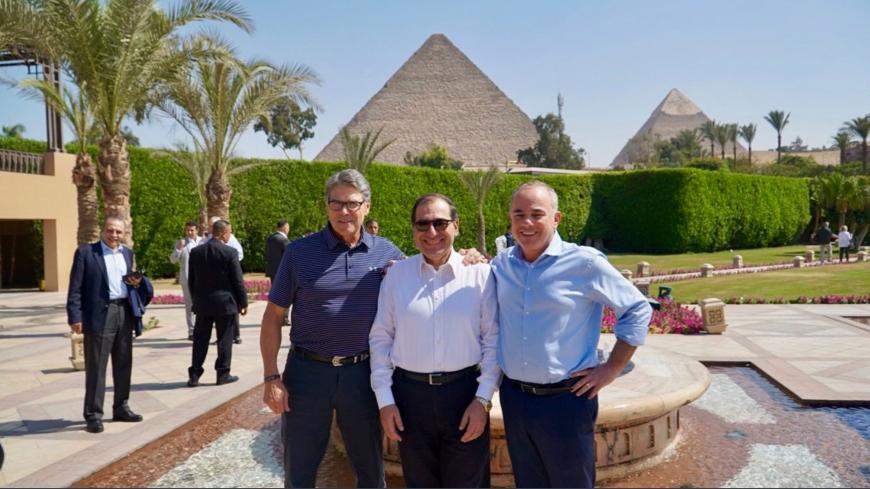 The visit of Minister of Energy Yuval Steinitz to Egypt July 25 for the natural gas forum, attended by regional energy ministers, highlights the continued warming in relations between Israel and Egypt under its leader President Abdel Fattah al-Sisi. In January, Steinitz visited Cairo for the first regional natural gas forum. During his current visit, Steinitz received an official reception that included exceptional gestures on the part of the hosts: a press conference with Sisi himself and a visit to the pyramids at Giza, with the press in tow.

The estimate is that the high media profile given to the visit stems, among other things, from the American patronage as part of President Donald Trump’s “deal of the century” and the economic workshop in Bahrain June 25, where a significant cornerstone was laid on the way to overt normalization between Israel and the pragmatic Sunni states, including on issues dealing with the energy industry, on which the Gulf states' economy is based.

In light of the discovery of the enormous natural gas deposits in the Mediterranean, Egypt and Israel have become important players in the energy field. This has brought Steinitz and his Egyptian counterpart Tarek el-Mulla to discuss stepping up the implementation of a previous agreement to export gas from Tamar and Leviathan gas rigs to two gas liquifying facilities in Egypt, and the agreement’s potential future expansion.

The more interesting initiative raised in the talks between Steinitz and Mulla was the creation of a land-based liquefaction facility on the shore of the Red Sea in the Sinai Peninsula, through which gas could be exported for energy needs to markets in Asia. According to senior officials in the Ministry of Energy in Jerusalem, the plan is to build the facility in Egyptian territory. This project would provide employment for thousands of Egyptians as it is being built and to hundreds more when it is operating. Building the facility on the shores of the Red Sea would open up the possibility of exporting Israeli and Egyptian gas to important markets in East Asia, including India, China, Japan, South Korea and other countries. Today, this market consumes about 70% of global liquid natural gas. The price of building land-based liquefaction plants of a medium scale is about $10-15 billion, and the relative advantage of a facility located on the Red Sea shore is shortening the duration the gas is transported and bypassing expensive transport through the Suez Canal.

Another large-scale project discussed in the talks is the “Poseidon Project” — laying down the longest underwater pipe in the world, from gas reserves in Israel, Egypt and Cyprus to southern Italy, through Greece. Prime Minister Benjamin Netanyahu regularly meets with his counterparts in Greece and Cyprus in order to strengthen this energy alliance, and Sisi does the same. That’s how a quadripartite energy alliance has formed in this part of the world. The last meeting of the group took place in Jerusalem in March, with the participation of Netanyahu, the prime minister of Greece, the president of Cyprus and US Secretary of State Mike Pompeo.

Pompeo is not the only senior American official advancing this alliance. The presence of US Secretary of Energy Rick Perry at all of the meetings at the conference in Cairo attests to the involvement and encouragement of the Americans for these moves, and has no doubt contributed to the unusual Egyptian warmth toward Israel. Oded Eran, a researcher at the Institute for National Security Studies and former Israeli ambassador to Jordan and the United Nations, told the financial newspaper Globes that this is the first time there has been a public American presence of such senior officials in contacts of this type, and that the Americans understand the diplomatic necessity of entering the energy field in the eastern Mediterranean.

“The United States has an interest in supporting Egypt’s plans to become a regional energy hub,” Gina Cohen, an expert on the global natural gas market who was recently invited to lecture for senior Egyptian officials on energy policy, told Globes. “Trump’s deal of the century includes an investment of $1.5 billion in turning Egypt into a regional energy hub. This is a move that is meant to support the Egyptian economy and also contributes to the American fight to reduce the European Union’s dependence on Russian gas.”

According to Cohen, the Americans have pressured the EU for two years already not to authorize increasing its dependence on Russian gas, and instead to increase acquisition of American liquid natural gas and gas from the eastern Mediterranean.

Another geopolitical perspective is Egypt’s competition, as an ally of the United States, with Turkey, which is backed by President Vladimir Putin’s Russia. Egypt believes that it should be the one to control the eastern Mediterranean, and produce natural gas itself and deliver liquid gas through its territory to Europe.

The previous gas contacts between Israel and Egypt — in the framework of which a gas transport pipeline from Egypt to Israel was built — met with some difficulties at the beginning of the decade when the pipeline was tampered with many times, apparently by Bedouin rebels in northern Sinai, some of whom are connected to Islamic terror groups. The attacks on the pipeline brought its operation to a halt. Following the change in regime in 2012 (from Hosni Mubarak to the Muslim Brotherhood’s Mohammed Morsi) two Egyptian government gas companies announced the unilateral cancellation of a signed agreement to supply gas to the Israeli electrical company — a cancellation that caused direct damage to the Israeli market, estimated at 15 billion Israeli shekels ($4.2 billion). The pipeline was never repaired.

Those events have caused concern in Israel that future projects will also be damaged or canceled under similar circumstances. The Tzemach Commission, which studied the Israeli gas market, determined in 2012 that Israel’s strategic interests require that gas export facilities would be in areas under Israeli control and recommended a facility near Eilat, since this is an area under higher security control.

The willingness to once again discuss this initiative attests that the Egyptians showed some guarantees that they could protect the facility and the pipelines leading to it, and that the topic is of utmost importance to the Trump administration, so that Israel is once again willing to take the risk. The bottom line is that strengthening ties in the field of energy between Israel and Egypt is both an Israeli and Egyptian interest, but no less a significant American interest, too. It seems that Washington would give it any assistance necessary.