Experts say that the global energy crisis is exactly the moment when Israel must expand its natural gas export quotas. 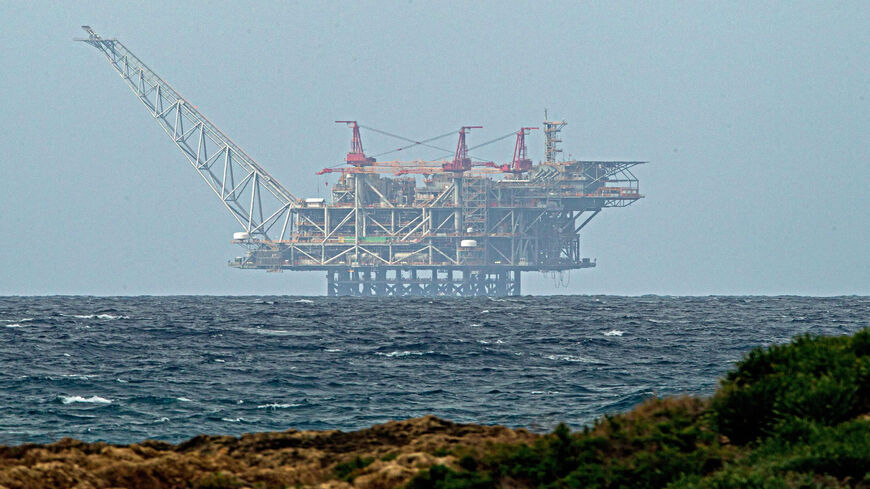 The platform of the Leviathan natural gas field in the Mediterranean Sea is pictured from the Israeli northern coastal city of Caesarea, Feb. 24, 2022. - Jack Guez / AFP via Getty Images

The discovery of another marine natural gas reservoir, announced May 9 by British natural gas company Energean, underscores Israel’s emerging status over the past decade as a regional power in the field of natural gas. The country is capable of providing not only for its own needs, but for the needs of its neighbors as well, and even for other countries around the world.

The discovery in the Athena well led the company to go public about the near certainty that the Block 12 search zone contained nearly 60 billion cubic meters (bcm), or 1 cubic kilometer, of natural gas.

Shaul Zemach, country manager for Israel of Energean Oil and Gas, told Al-Monitor that the arrival of a new gas platform in Israel early this summer (it left Singapore last week) will ensure the viability of gas production in all of the company’s reservoir: Karish, Tanin and the current reservoir in Block 12. The idea is to place a pipeline that will run several dozen kilometers all along these reservoirs and going to the platform.

Data provided by the Ministry of Energy indicate that Israel’s proven gas reserves amount to 921 bcm before Energean’s recent discovery, while Israel’s maximum need for gas in the next 25 years will not exceed 500 bcm. Conservative estimates put the amount of extractable natural gas that has yet to be discovered at another 500 bcm for production. This means that Israel has about 900 bcm of natural gas that it can sell to the world. And who is the expected main consumer of Israel’s natural gas? Europe.

On April 27, Russia had announced it was halting the transfer of its natural gas to Poland and Hungary, unless they agreed to pay for it in rubles. This sanction has been looming over Europe since the start of the Russian war on Ukraine. Gina Cohen, an internationally renowned expert on the international gas market, specializing in the eastern Mediterranean region, appeared before the European Parliament in Brussels on that same day. According to Cohen, Israel could relieve some of the Russian pressure on Europe by increasing its export quotas.

In her presentation to the European Parliament, Cohen discussed the potential inherent in the export of gas from the eastern Mediterranean, including Israel, as a replacement for Russian gas. This would require, firstly, the continued development of the vast gas fields in the region, as well as ways to transport the gas to Europe.

The presentation of Cohen was based on an extensive research project she conducted for the European Union. Her findings were also presented to Israel’s Foreign Ministry, so that the government can make the appropriate decisions on the matter.

Reportedly, the goal of the EU is to put a complete stop to the acquisition of Russian gas by 2027. Cohen said that it is up to the Israeli leadership to rise to this challenge and decide quickly to move ahead with technical solutions to the problem of transferring gas to Europe. This way, she explained, the gas companies will be able to reach long-term agreements with the Europeans, which would justify both the development of existing gas fields and continued drilling to find additional gas fields in the eastern Mediterranean basin.

“The Israeli leadership gives the impression that it does not understand the strategic importance of our natural gas reservoirs at all. … We need to realize this potential and promote the sale of gas to Europe, which needs it. It would extend over a period of 20 years and bring at least $30 billion into the country,” Cohen told Al-Monitor.

There are several possibilities of transporting gas from Israel to Europe:

One possibility is laying an underwater pipeline to Turkey, which has its own pipeline to transport gas to Europe.

A second one is to lay a gas pipeline directly from the reservoirs at sea to liquefaction plants in Egypt, and to expand the flow along the land-based pipelines to Egypt.

A third option is developing the EastMed pipeline project from Israel to Greece and Italy by way of Cyprus. But the feasibility of this project is not clear yet. The Poseidon company has been charged with examining exactly this. Its final feasibility study should be published by the end of the year.

Another possibility is the creation of an offshore liquefaction facility at sea.

Cohen recommends the last of these options, saying that it is the quickest and most efficient. She explained that this would make Israel completely independent in the export of gas. This way, Israel would no longer have to rely on Egypt or Turkey, and it would have the flexibility of choosing to whom it wants to sell its gas.

There are five such offshore liquefaction facilities in the world today, she continued. The cost is over $5 billion for a facility that can liquefy 5-7 bcm of gas per year. She concluded that the government must take care of the necessary regulations so that such a facility could be brought directly to the oil fields at sea.

The Energy Ministry constantly studies Israel’s natural gas reserves and issues policy recommendations on export quotas. One of the central studies of the issue was published last year. The 2021 report of the Adiri II committee — under the guidance of then-Director General of the Energy Ministry Ehud Adiri — recommended that Israel increases its export quotas for natural gas.

With this spirit in mind, the current Director General of the Energy Ministry Lior Schillat told Al-Monitor that they are welcoming the May 9 announcement of Energean, since it signifies an increase in Israel’s natural gas reserves.

“Israel, like the rest of the Western world, is marching forward to a hybrid era in which different sources of energy are used, while making a massive transition to renewable energy. Israeli natural gas is a transition fuel, which will allow us to make it through this era while strengthening our economy and our relations with our neighbors and with Europe,” Schillat said.

Israel currently exports about 10 bcm of natural gas per year. Some of it goes to Jordan, for use in its power stations. And yet, although this is a necessity for the Jordanian economy, every so often the Jordanian parliament calls for the agreement with Israel to be canceled.

The rest of the gas goes to Egypt. A large part of that is sent to the liquefaction facilities on the Mediterranean coast and from there to Europe. Cohen contends that Israel alone can supply Europe with 10-25 bcm of natural gas per year, in addition to what it already provides to Jordan and Egypt. But this would require the expansion of drilling and development, and the improvement of gas transportation routes to Europe. She also believes that natural gas prices will remain high for the next two or three years at least, until the solutions now being worked out are implemented. In other words, this is exactly why Israel should act quickly.

The Adiri II report shows that just three gas search drillings have taken place in Israel’s maritime territory since 2012: two in 2013 and a third in 2019. Meanwhile, neighboring states have conducted dozens of searches in that time. The Israeli government is expected to decide soon whether it wants to renew its earlier momentum in order to get maximum advantage of this important energy resource.