Energy Minister Karine Elharrar hailed the signature this morning of a trilateral memorandum of understanding between Israel, Egypt and the European Union on the export of natural gas as a historic event. 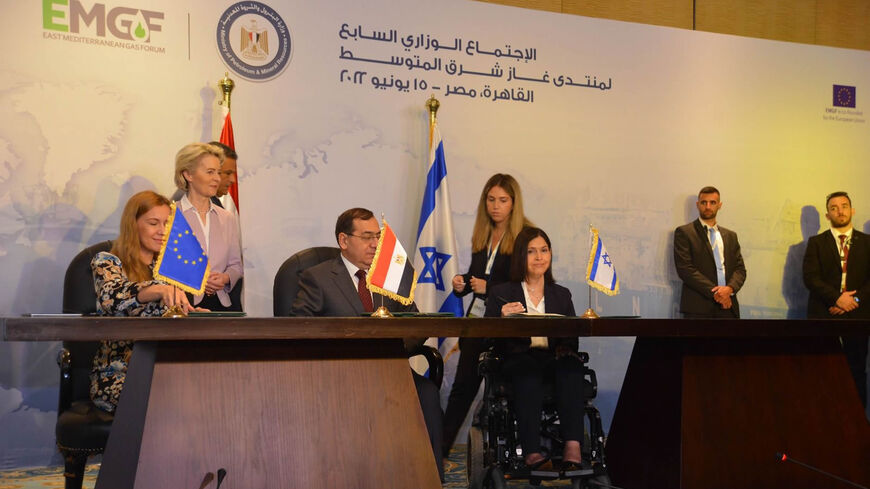 Signature ceremony of the memorandum of understanding between Israel, Egypt and the European Union for the export on natural gas to Europe, EMGF 7th ministerial meeting, Cairo, Egypt, June 15, 2022. - Peter Adiv

Israel’s Energy Minister Karine Elharrar signed this morning in Cairo a trilateral memorandum of understanding with Egypt and with the European Union, enabling Israeli marine-extracted natural gas from the Mediterranean Sea to be exported to Europe through Egypt.

Addressing the 7th ministerial meeting of the East Mediterranean Gas Forum (EMGF), Elharrar said that the joint commitment by Israel and by Egypt to share their natural gas with Europe places both countries and the region as major global players in the energy market.

"This is a statement to those who see in our region only negative forces such as division and conflict. This memorandum attests to the fact that we are paving a new path, that of partnership, solidarity and sustainability. We are not just changing the paradigms in our region, but also how others perceive us and our regional future," Elharrar noted. "Together with our European partners, Egypt and Israel are sending a message that one can be competitive in the natural gas market while seeking a better environmental future."

Referring to the signing of the memorandum as a "historic moment," Elharrar said the agreement "doesn’t just safeguard natural gas exports to a Europe affected by horrendous outcomes of war [in Ukraine], but it also sets us on the road to a sustainable and more hopeful region."

Jordanian Minister of Energy and Mineral Resources Saleh Al-Kharabsheh, who spoke right after Elharrar, did not refer directly to Israel, but insisted that progress can be made only by all the members of the forum working together. He stated that Jordan was committed to dialogue with all EMGF members in order to achieve the goals of promoting regional natural gas and advancing energy sustainability and protection of the environment.

After the signing, EU Energy Commissioner Kadri Simson tweeted, "This is a historic day for the EU’s energy engagement and energy security: Signing the MOU with Egypt and Israel, two reliable, strategic partners. We will be able to count on LNG [liquified natural gas] from Israel and the Mediterranean region via the Egyptian LNG infrastructure." Elharrar and Simson also held a separate meeting between them, on the margins of the EMGF ministerial meeting.

According to Israel’s Energy Ministry, the understanding signed today in Cairo recognizes the key role that natural gas increasingly plays and will continue to play in coming years in the EU energy markets, on the backdrop of the European goals for zero emission by 2050. It stipulates that the signatory parties will work together to enable the regular supply of natural gas to EU member states from Egypt, Israel and other destinations, through existing natural gas liquefaction infrastructure in Egypt. The agreement is valid as of today for three years. After that, it will be automatically renewed for another two years.

The understanding includes a number of steps that should accelerate its implementation, such as a clause encouraging European companies to participate in competitive proceedings and invest in natural gas exploration and production projects in both Israel and Egypt. The agreement also calls for a plan to be formulated for optimal utilization of infrastructure related to natural gas extraction, liquefaction and transportation.

The Energy Ministry emphasized to Al-Monitor the economic, environmental and diplomatic importance of the understanding signed today, a process championed by Elharrar for several months now, and especially since her participation last March at the ministerial meeting of the International Energy Agency in Paris.

In fact, this year alone, Israel gained 900 million Israeli shekels ($260.5 million) from exporting natural gas to Egypt. It should also be noted that while security cooperation in the Sinai Peninsula, the Gaza Strip and the region have long been the basis for Israel’s ties with Egypt, the issue of energy is now becoming a significant element in enhancing bilateral relations.

Apart from exporting natural gas to Europe, Israel is striving to further integrate European efforts for sustainable and clean energies. For instance, Israel’s acceptance last May to the Horizon Europe 2022 innovation and research program opens the way for Israeli researchers also in fields of renewable energies to benefit from European financing and collaboration with European institutions.