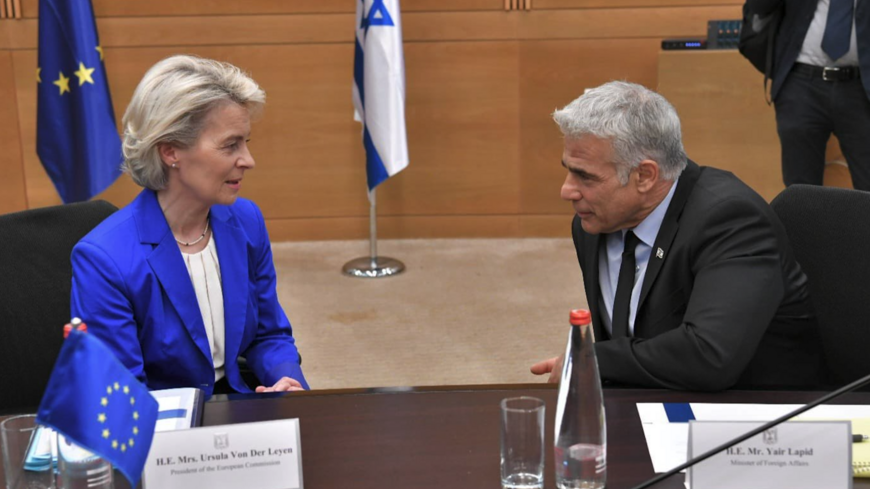 Israel’s Energy Minister Karin Elharar is set to participate tomorrow in Cairo at the 7th ministerial meeting of the East Mediterranean Gas Forum (EMGF). According to Israel’s public broadcaster Kan, Elharar will meet in Cairo with Egyptian President Abdel Fattah al-Sisi, Egypt's Minister of Petroleum and Mineral Resources Tariq al-Mulla, and European Union Commissioner for Energy Kadri Simson. These meetings should serve as preparation for a memorandum of understanding on exporting Israeli natural gas from Egypt to Europe.

Prime Minister Naftali Bennett met this evening with European Commission President Ursula von der Leyen, who was on a two-day visit to Israel and the West Bank. Earlier in the day, she met with Israel’s President Isaac Herzog and also delivered a speech at Ben Gurion University in Beersheba, where she received an honorary doctorate. Yesterday, von der Leyen met with Foreign Minister Yair Lapid and Elharar.

Addressing journalists at the beginning of the meeting, Bennett said, "Today, both of us will be discussing ways where the EU and Israel can cooperate on food security, energy and more. In recent years, Israel went from being a gas importer to becoming a gas exporter, and we are currently working to produce more natural gas from Israel’s economic waters."

Before meeting with von der Leyen, Bennett met with Italian Prime Minister Mario Draghi, also on a visit to Israel. Speaking at a joint press conference with Draghi, the Israeli prime minister pledged to help Europe obtain alternative sources of gas to Russia’s fuel, noting that "Israel will be able to help Europe, producing natural gas, and this is excellent news."

A statement by the Commission ahead of von der Leyen’s trip to Israel said that talks with Israeli leaders would focus "in particular on energy cooperation." Israeli media also reported that energy, and specifically Israeli natural gas, were at the heart of von der Leyen’s visit.

Already a few weeks ago, reports said Israel and Europe were negotiating for Israel to increase significantly the amount of natural gas shipped to Europe via Egypt where it is liquefied, probably by boat. Elharar was the one to initially push such a move when she came to Paris at the end of March for the ministerial meeting of the International Energy Agency (IEA), discussing this possibility with several European interlocutors.

Another possibility for exporting Israeli natural gas to Europe is the EastMed undersea pipeline project, though the American administration withdrew its support of this initiative a few months ago, and its construction could take up to seven years. Still, Israel has not backed away completely from this idea. Lately, Israeli sources noted that in view of the war in Ukraine and regional instability, an undersea pipeline could be better protected than ships transporting fuel.

Addressing academics and students at Ben Gurion University, von der Leyen referred to the Russian invasion of Ukraine, saying that "EU and Israel are bound to be friends and allies. … The strongest bond EU and Israel share is our belief in democracy and its values. Your freedom of thought has turned a small country of just a few million into a global trailblazer for science and innovation. Today more than ever, democracies like ours should stick together. We are doing so in facing Russia’s war in Ukraine and in fighting climate crisis. We are stepping up energy cooperation to help the EU break free from Russian fossil fuels. We are also preparing infrastructure projects that will help us along the green transition.’’

Von der Leyen blamed Russia for blackmailing Europe over its export of fuel, stating that "the Kremlin has used our dependency on Russian fossil fuels to blackmail us. Since the beginning of the war, Russia has deliberately cut off its gas supplies to Poland, Bulgaria and Finland, and Dutch and Danish companies, in retaliation for our support to Ukraine."

The president of the European Commission said that this approach of the Kremlin only strengthened European resolve to free itself of its dependence on Russian fuels. She then noted that the EU was exploring ways to increase its energy cooperation with Israel.

This political willingness for cooperation on energy and natural gas was also expressed by Elharar.  "Last night I met with the president of the European Union Ursula von der Leyen, who thanked me for the hard work of advancing the sale of Israeli natural gas to the European continent, which is facing an acute energy crisis. Already in March, we set up teams working with the European Union on an agreement to sell Israeli natural gas to Europe. I will continue to work to create a reliable and efficient [Israeli] energy market that serves as an example to the world,’’ tweeted Elharar.

In his statement after his meeting with von der Leyen, Lapid did not address Israeli gas exports. Still, Israeli diplomatic sources told Al-Monitor last week that talks between Jerusalem and the European Commission on an agreement for exporting Israeli natural gas through Egypt were advancing rapidly and could even be concluded in the coming weeks. The sources noted that while the quantity Israel and Egypt could transfer to Europe is rather small compared to the needs of Europe, it is not negligible.

A report from June 9 claimed the European Commission is already circulating amid EU member states a draft proposal for a trilateral agreement with Israel and Egypt. The Commission did not confirm this but rather indicated it was hoping to conclude the agreement by the summer. Von der Leyen is expected to travel from Israel to Egypt, where she will continue discussing this topic.